The winter moth is an invasive insect pest in North America that originates from Europe. This insect was accidentally introduced into Nova Scotia in the early 1900s where it became a pest of forest trees and agricultural crops including apple and highbush blueberry. It then was discovered in British Columbia and the Pacific Northwest in the 1970s where it once again became a pest in apple and highbush blueberry cultivars. In the 1990s the winter moth was found in Massachusetts, where it caused dramatic defoliation to many different tree species and most notably became a pest on cranberry. More recently, populations have been detected in Maine, with the first report of severe tree defoliation occurring in the spring of 2012 in the towns of Harpswell and Vinalhaven, Maine. This insect attacks a wide range of woody plant species and can result in complete defoliation of trees and shrubs as well as economic damage to many different agricultural crops, including wild blueberry. Currently, the winter moth is found all throughout coastal Maine and may spread Downeast to the large wild blueberry growing areas of the state. 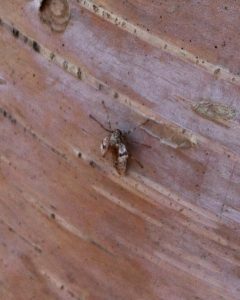 Figure 4.1 (A) Flightless adult female winter moth crawling up the trunk of a birch tree (A). Photo by Kaitlyn O’Donnell. 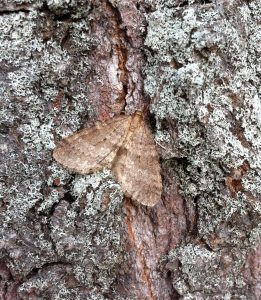 Figure 4.1 (B) Adult male winter moth resting on the trunk of an oak tree during the day (B). Photo by Kaitlyn O’Donnell.

Adults: Females are wingless and small bodied, a little less than ½ inch long. They are greyish brown in color, allowing them to easily blend in with the bark of their host plants. Males are the only ones that fly. They are small grayish-brown moths with a wingspan of about ¾ of an inch and are active throughout the evening. Moth emergence, male flight and female oviposition (egg laying) occur during the late fall and early winter months in Maine.

Larvae: Winter moth larvae are small green inchworms, also known as loopers or spanworms. They are small green caterpillars with one darker green strip down the center of their back and two white stripes on each side of their body. They move with an inching motion (forming an arch when they crawl) similar to the blueberry spanworm and the chain geometer. These caterpillars can be confused with the blueberry sawfly, which is also a green caterpillar that feeds inside leaf and flower buds. However, the blueberry sawfly is not an inch-worm and it does not have pale stripes along its body. Winter moth larvae go through five larval stages, called instars. When they first hatch in mid to late April, they are tiny, only about 1/10th of an inch in length. In their final stage of larval development, they have grown to ¾ of an inch long. They are able to produce silk that they use to move from host plant to host plant in their early stages of development. This method of travel is called ballooning and depending on weather conditions caterpillars are able to balloon up to a mile away. These caterpillars are found feeding inside wild blueberry leaf and flower buds when they are just beginning to open. As the blueberry leaves and flowers open and mature, the caterpillars are often found feeding on the underside of the leaves or inside of the blueberry flowers. They will also use silk to roll up the edge of a leaf or sandwich two leaves together in order to feed and protect themselves from predators. On highbush and wild blueberry plants, winter moth caterpillars prefer to feed on flowers.

Pupae: In their final instar, winter moth caterpillars use their silk to drop from the canopy, create a cocoon of soil and silk and pupate inside. These cocoons look like small oval dirt pellets, less than ½ an inch in length and are found in the top layer of soil beneath the host plant they fed on. The naked pupae are brown with a hard exoskeleton.

Winter moth adults are active during the winter months. In coastal Maine, this occurs from mid-November to mid-January. They are most active when temperatures are above freezing. On colder days, they rest on trees, houses, and other surfaces that may offer some protection from cold and wind. Upon emerging from their pupal stage, males fly in search of a female mate. When females emerge they immediately crawl towards the silhouette of a host tree or shrub and emit a sex pheromone to attract a mate. After mating, the females lay their eggs on the bark of their host plant. The eggs spend the rest of the winter on the bark of the host plant, such as wild blueberry, until it is time to hatch. Winter moth hatch happens over a period of a couple of weeks and occurs in the early spring. In coastal Maine, this happens in mid to late April. The caterpillars feed for about six weeks until their development is complete and they are ready to pupate. In coastal Maine, pupation begins in early to mid-June. The pupae spend the rest of the summer and fall in the ground until they emerge as adults in November.

The winter moth is able to cause such severe damage to host plants because of their high populations and the manner in which they attack their host plant. They enter the newly opening buds of leaves and flowers and feed on the tissue from the inside out. When populations are at outbreak levels, there can be upwards of 20 larvae in one bud. Areas where populations are this high experience drastic defoliation in the late spring months. These plants are able to send out new leaves later in the summer, but fruit production is lost for that year.

The winter moth was successfully controlled in Canada in the 1950s using a parasitic fly as a biological control agent. This parasite attacks the caterpillars, allows them to feed and pupate, and then kills the pupal stage. It has been released in Massachusetts, where they are beginning to see positive results, and has more recently been released in Harpswell and Cape Elizabeth, Maine. However, based upon these previous releases, it will most likely take up to ten years before seeing any positive results in coastal Maine. A sweep net can be used to detect the presence and relative abundance of winter moth caterpillars infesting the crop. The same sweep net method should be used for monitoring winter moth as is used for blueberry spanworm (Fact sheet 204).

Unfortunately, at present, there is no threshold level for winter-moth decision making about control. Therefore, it is suggested that growers sweep for the presence of winter moth and if noticeable damage to flower buds is observed, control might be considered if serious. A spot or localized treatment is recommended if the infestation is confined to a section of the field. In general, insecticide control of this insect is discouraged because the larvae are feeding during the bloom of wild blueberry, and using most insecticides registered for wild blueberry during this stage is harmful to pollinators visiting these plants. However, insecticides safe to bees can be used if populations are damaging. Consult Cooperative Extension recommendations for control tactics (Fact sheet 209).