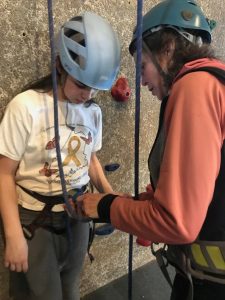 Nancy grew up in New York and went to college at the University of Vermont.  She became involved in the Outing Club there and developed a love for rock and ice climbing, mountaineering, paddling, biking, hiking, and outdoor education.  This led to working at Outward Bound schools in North Carolina, Maine and Oregon.  Nancy finally settled in Newry, Maine to work at the Hurricane Island Outward Bound land base in 1982 and has lived in the area ever since.  She enjoys volunteering in the community, mountain biking and traveling.

“When my son entered kindergarten in 2002 and I helped in the classroom on a weekly basis, I began to see that many students in SAD44 could use more guidance and support than one teacher could offer.  While the school Principal suggested a mentoring program and I “adopted” a couple of kids myself, a formal program was never developed. So when I heard of a mentoring program coming to the middle/high school a year or two ago, I was delighted, intrigued, and eager to be a part of it.

I believe the NorthStar program, run by Lyndsey Smith, is just what this community needs.  There is now a 7th grade and an 8th-grade group and I have been on trips that have involved kids from both grades.  I really like that kids have elected to participate, and bring different interests and backgrounds to the group. Lyndsey is a wonderful person to have at the helm.  She cares a lot for the kids, is well organized, explains things clearly, understands that people make mistakes, addresses issues that arise, and juggles all the different families’ needs in an amazing way.

In the NorthStar program, the kids are able to do things that will broaden their horizons – academically, physically, socially.  Our trip to the Common Ground Fair last fall involved seeing many interesting exhibits, as well as camping out and volunteering at the compost station.  We spent a couple of days on campus at UMO during the February break – touring the campus, asking questions of UMO students, participating in a dairy lab, doing a hands-on engineering project, touring the dairy operation as well as getting to climb on a climbing wall and use the swimming pool.

One of the 7th grade boys told me he wasn’t going to go to college. But watching him build a bridge (as part of a small group) with spaghetti and a glue gun, and the initiative and leadership I saw in him, I’m wondering if a program like NorthStar might cause him to reconsider.  Later, on the climbing wall, the same student would go up a short ways then want to come down. But then he would try again and get further. That continued until he reached the top! On his final climb of the afternoon, another student did the climb next to him to encourage him on the final moves at the top.  It was a glory moment for all.

Other NorthStar activities I’ve joined have included snowshoeing, sewing, ice fishing, and more climbing.  Each activity has drawn different kids and offered new experiences. I’ve enjoyed seeing the interactions of the kids, their increasing competence, and them learning to deal with different issues.

I am so pleased that the NorthStar mentoring program is in our community and am delighted to be part of it.”