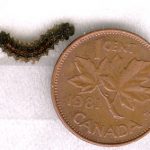 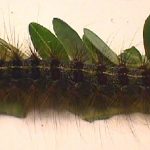 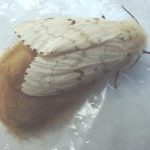 A female gypsy moth, with her egg mass beneath her. 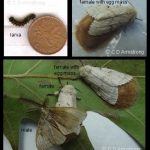 Notes: The caterpillars of Gypsy moth begin to show up on Maine cranberry beds during the first week of June, generally (plus or minus a week).  Most are blown in from forested areas though they can also overwinter on the beds themselves. Their numbers can be fairly numerous in some years, although zero were found during the entire 2009 cranberry season by UMaine Extension’s cranberry scientist.  If they are found, add their numbers together with any cutworms and humped green fruitworms found (when determining a count to use in conjunction with the Action Threshold, which is typically an average of 4.5 caterpillars per 25 sweeps).

Gypsy moth is cyclic and in the past has undergone major outbreaks every nine to ten years in the northeastern U.S. and Canada. Historically, this insect is one of North America’s most devastating forest pests (it is especially fond of oak and aspen). It has no problem eating cranberry foliage as well, however. Check for patchy infestations that can be spot-treated, e.g. along bed edges facing trees that might be infested. Check previously infested areas (eggs can overwinter on flooded beds). Early detection is key: larvae consume the terminal buds and any new growth that has begun.