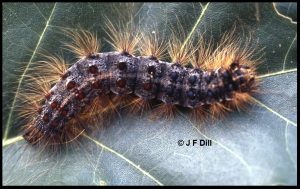 The Gypsy Moth (Lymantria dispar), introduced accidentally in 1868/1869 into Massachusetts from Europe, is a major pest of hardwood trees in the eastern U.S. and in bordering areas of eastern Canada.  Gypsy moth caterpillars feed on most hardwood trees, except ash. They prefer oak, poplar, gray birch and fruit trees.  When half grown or larger, the larvae are also likely to feed on evergreens.  As the number of gypsy moth larvae in an area increases, their favorite food sources become depleted.  The larvae are then likely to feed on other ornamental trees and shrubs.

Late-stage caterpillars are hairy, dark and easily distinguished by five pairs of blue spots on the front body segments and six pairs of red spots on the back body segments.  Fully grown larvae are 1-1/2 to 2-1/2 inches long.  About 70 percent of their food is consumed during this stage of development; they are able to strip a tree overnight.  Female gypsy moths cannot fly.  Consequently, after mating, they do not move far from their pupation site to lay their 500 or more eggs. 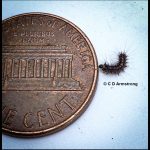 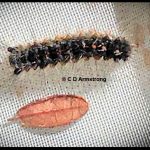 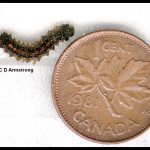 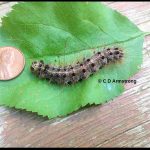 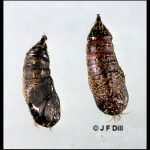 A pair of Gypsy Moth pupae

Female Gypsy Moth with her egg mass beneath her 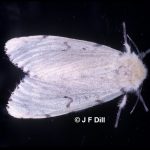 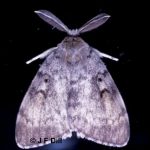 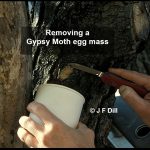