Why a Plant Hardiness Zone Map? 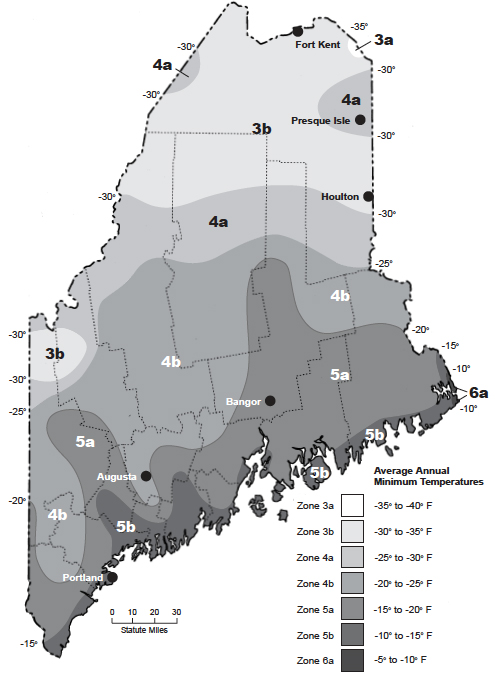 Low temperature is one of the most critical environmental limitations for plants. Some plants, like annual flowers and vegetables, simply avoid the cold of winter by dying at the end of summer. Perennial plants (including trees, shrubs, and herbaceous perennials) must be able to survive the lowest temperature each winter in order to live into the next growing season. Such plants have a threshold temperature below which they will die. These threshold temperatures determine how far north plants will survive.

The Plant Hardiness Zone Map of the United States Department of Agriculture (USDA) represents low winter temperatures in North America. It is a guide to help you to assess plant hardiness.

What the Map Shows

The map above shows the plant hardiness zones of Maine based on average yearly minimum temperatures, from data for each year from 1974 to 1986. (This time period was the most recent prior to the map’s release for which reliable data were available, with most sites reporting at least 10 years of data.) Compared to the earlier map, this map shows that many sites in Maine have become colder. This recent period of cold extremes is verified by reports of freeze damage to plants. Remember that the map is based on average annual minimum temperatures. Although there is a global warming trend, we continue to have very cold temperatures each winter in Maine.

Low winter temperature is just one factor that affects plant growth. A plant may be adapted to the temperature of a location but may die because of a problem related to another environmental factor. Or a plant may be stressed due to other problems, and may then die from the extra stress caused by a very cold winter. The success of perennial plants depends on many factors, including the following:

Soils must also be well aerated to supply enough oxygen to plant roots. Heavy clay and compacted soils hold too little oxygen for many plants.

Essential nutrients must be available in the soil in the right amount and balance. These nutrients are more available to plants if the soil pH (acidity or alkalinity) is at an optimum level. Each plant performs best within a range of pH and nutrient levels.

The plant hardiness zone map is based on a limited amount of data, and the zones represent five-degree increments of low temperatures. This averaging and smoothing of data give only a general picture of temperatures. It does not include local variations called microclimates. A low, wet location, for example, may be a lot colder than a higher, dry location. Cities tend to be warmer than in the nearby countryside. Large bodies of water make temperatures less extreme. High mountain areas tend to be colder than lower elevations. (The Maine data station with the highest elevation is Rangeley, 1,530 feet above mean sea level, so the mountainous areas of Maine may be colder than shown on the map.) One guideline states that a 1,000-foot rise in elevation means a 5 degree F drop in temperature.

There are two areas of Maine for which there are differences between site data and the map. The first is Houlton. Houlton data suggest that it should be in zone 4a. The map shows it in zone 3b. This rating reflects both the “smoothing” of data and the fact that data stations east of Houlton, in Canada, report much colder data than the Houlton station.

The second discrepancy is Augusta. The Augusta airport data stations suggest that Augusta be rated zone 5b, but the map shows it in zone 4b, a full zone colder. Surrounding data stations in all directions produced colder temperature readings than Augusta. It’s unclear whether the entire Augusta area should be considered a warmer microclimate, or whether the Augusta weather station, located at the airport, is artificially influenced by river and urban factors.

How to Use the Map

Many catalogs and plant references refer to the plant hardiness zone map to indicate whether a plant is likely to survive in a location. For example, eastern white pine is rated hardy to zone 3, and would be expected to do well in any part of Maine. A Japanese maple, on the other hand, is rated hardy to zone 5 or 6 (depending on the type). It would show great adaptability only in coastal areas of Maine. You can use the zone information to choose landscape plants. However, don’t forget that there is a difference between surviving and thriving. A plant exposed to the lowest temperatures it can stand may survive the winter but lose so much vigor that it does not grow well.

This map is intended as a starting point only. Experiment with a wide variety of plant materials and collect long-term weather data for your site. This will help you fine-tune your ability to select plants that will survive and thrive in your location.

Of course, to be hardy long-term, a plant must be able to withstand low temperatures as they occur. A plant might do well for several mild winters, only to succumb in a very harsh winter. You might want to choose plants based on a colder zone, especially if you think your location is colder than in nearby areas. Or, when selecting plants that you want to live for many years, you may want to use your site’s “Low Zone” in Table 2, rather than its “Average Zone.” That way, you’ll be selecting plants that will survive the very coldest temperatures they might encounter, even in an extreme year.