Variable-leaf milfoil is an aggressive aquatic plant that can form dense mats that congest waterways and crowd out native aquatic plants. The thick growth of this plant can impair recreational uses of waterways including boating, swimming, and fishing. The dense growth of variable-leaf milfoil degrades the native habitat of fish and other wildlife, and may also provide breeding areas for mosquitoes. The main method of dispersal of this plant appears to be fragmentation. Plant fragments are moved around by people, animals, and water currents.

Variable-leaf milfoil is an herbaceous perennial plant with a trailing growth habit. Long stems with whorls of finely divided leaves are rooted in the bottom and rise vertically through the water column. Near the surface, especially in shallower water, stems turn and grow horizontally, often forming thick mats. There are two distinct types of leaves. The submerged leaves are feather- or comb-like, occur in whorls of four to six, and are one to two inches in length. The highly variable emergent leaves are actually bracts and can reach one inch in length. These leaves are entire (not divided), stiff, longer than wide and usually have serrated margins. The flowers are small and reddish and form on the stem just above the emergent leaves. Flowering spikes have thickened reddish stems and stick up out of the water as much as six inches, more than twice that of our native milfoils. Maine has six species of native milfoil. Identification of invasive milfoils should be verified by staff at the Maine Natural Areas Program or Maine DEP.

In Maine, this species is found in neutral to weakly acidic waters. It grows densely in areas with organic muck substrates but is also capable of growth in silt-covered sandy substrates. Variable-leaf milfoil occurs in waters up to eight feet deep, and possibly deeper where water clarity is adequate. As of 2002, it is known in over a dozen sites, all in the southern half of Maine including lakes, ponds, and some slower streams. Many other ponds, lakes, and rivers are vulnerable to infestation by this species. Only a small fragment of a plant is necessary to start a new population. 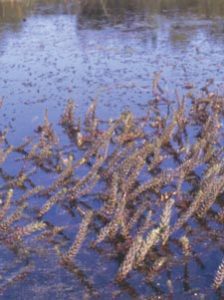 Variable-leaf milfoil is native to states in the southern U.S. from Florida to central and north Texas. It now occurs as far north as North Dakota, Maine, and Quebec. It is present in all New England states except Vermont. Although variable-leaf milfoil is native to the U.S., there is no historic evidence of its being native to New England. The first New England record is from 1932 in Bridgeport, Connecticut, where it is thought to have been intentionally introduced.

The best way to control this species or any aquatic invader is to prevent it from being introduced in the first place. Anyone engaged in activities in Maine’s waters should be aware of the potential for the spread of invasive plants and take steps to prevent their introduction. Your actions can make a difference. Simple things you can do include inspecting boats, motors, and trailers at the boat ramp before launching and again after hauling them out. Prevent plant material from getting into bait buckets and live wells, and from getting tangled up in anchor ropes or fishing gear. Plants cleaned from boats and gear should be disposed of in a trash receptacle or away from the water on dry land.

Once established, invasive aquatic plants are extremely difficult to eradicate. Control has been attempted with water level manipulations, mechanical control, and herbicides. In most cases, these plants have survived attempts at control. Biological controls for invasive aquatics are still being researched and may help limit the growth of some species in the future. Note that the use of herbicide in Maine waters is strictly regulated. Only licensed professionals with a permit from the Department of Environmental Protection may carry out herbicide treatments in Maine’s waters. Hand-pulling of invasive aquatic plants also requires a permit. Also note that in Maine it is illegal to possess, import, cultivate, distribute, or transport Myriophyllum heterophyllum (Department of Environmental Protection, Chapter 722 – An Act to Prevent the Spread of Invasive Aquatic Plants). If you think you have found an invasive aquatic plant contact ME DEP at 1.800.452.1942 or the Maine Natural Areas Program at 1.207.287.8041.

VIDEO: How to Get Rid of Invasive Plants (YouTube)

Materials developed by the Maine Natural Areas Program for use by University of Maine Cooperative Extension. This fact sheet was made possible by a gift from New England Grows.