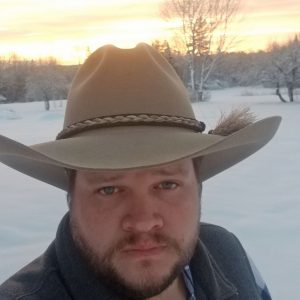 Colt grew up in a coal mining family in West Virginia where they also operated a small family farm and show horse stable. During academic breaks and between schools, he worked in strip mines across the country. Colt earned his B.S. in Animal Science at the University of Kentucky, M.S. in Animal Science at Angelo State University, and his Ph.D. in Animal Science at the University of Arizona in 2006, 2012, and 2016, respectively. In the fall of 2016, he worked on a postdoc with Dr. Derek Bailey at New Mexico State University. Since 2017, Colt W. Knight works as an Assistant Professor of Extension for the University of Maine where he serves as the State Livestock Specialist. He teaches Introduction to Animal Science (AVS 145) and runs the Maine Grazing Behavior Lab. The core focus of the Grazing Behavior lab revolves around designing and manufacturing livestock tracking collars, engaging in applied grazing behavior research, and assisting other researchers with technology to interpret animal behavior. Dr. Knight’s research is broadly focused on selecting animals uniquely adapted to landscapes and promoting sustainable agriculture. Colt is the current chair for the Society of Range Management Livestock Foraging Behavior Committee, as well as, the North East Region Chair for the National Association of County Agricultural Agent’s Teaching and Educational Technology Committee. He also serves as an Associate Editor for the journal Ecological Processes. Colt is actively engaged in outreach and has delivered over 150 seminars on livestock production since starting his career at the University of Maine.