The stem and bulb, or “bloat,” nematode (Ditylenchus dipsaci) is a relatively new pest in Maine that has the potential to become a long-term problem. The garlic bloat nematode is a microscopic unsegmented roundworm that moves relatively little by itself but is spread readily by planting infected garlic bulbs, and by soil from nematode-infested areas on feet, tools, and motorized equipment. The nematode can cause severe damage to garlic grown in backyard gardens as well as on commercial farms. Understanding the biology of garlic bloat nematode and how it is spread will help to minimize the serious and long-lasting effects of this harmful crop pest.

The stem and bulb, or “bloat,” nematode (Ditylenchus dipsaci) is a destructive plant-parasitic nematode of Allium bulbs (garlic, onion, and leek) as well as other crops. Ditylenchus dipsaci is found around the world in Allium production regions with moderate climates, where it has been the subject of considerable study since the late 1800s. In the United States, the bloat nematode was first reported on onions in 1929 and on garlic in 1935. Many countries have regulatory measures to limit the importation and spread of this destructive nematode pest. Ditylenchus dipsaci occurs as many biological races with different host ranges. In addition to onions, other plant hosts for this pest include leeks, garlic, chives, flower bulb crops, hydrangea, iris, gladiolus, alfalfa, celery, parsley, salsify, hairy nightshade, and Canada thistle.

Ditylenchus dipsaci is a parasitic nematode that completes its entire life cycle within the tissue of bulbs, stems, and leaves of higher plants. Root invasion is rare. The feeding activity of this nematode generally causes a breakdown of cell walls and can cause swelling and distortion of plant parts, as well as the breakdown of the stem base and bulb.

Reproduction is via mating and takes place within plant tissue. The complete life cycle can be completed in about 21 days at 60°F. After fertilization, females can deposit as many as 500 eggs over a 50-day period.

Cool, moist conditions favor invasions of plants by this nematode, which migrates to the soil surface after rains. The nematodes can penetrate through stomata, cracks, or leaf axils. After entering the plant, the fourth-stage juveniles go through the fourth and final molt where they differentiate into mature males and females capable of breeding. Several life cycles may be completed within a season in the outer layer tissue of the leaf or bulb. In late stages of plant decay, fourth-stage juvenile Ditylenchus dipsaci can collect on or near heavily infected tissue and form “nematode wool.”

The bloat nematode swims limited distances on its own but is easily spread by movement of infected plant material; water run-off; contaminated equipment, clothes, or shoes; or other means of transporting infested soil. Most often, the bloat nematode is introduced to a field by planting infected seed bulbs.

Garlic plants with bloat nematode (Ditylenchus dipsaci) symptoms will be stunted with leaf yellowing and may die prematurely. Initial bulb infection may show light discoloration. Later, entire cloves or bulbs will become shrunken and soft, darken, and eventually decay. Mild or new Ditylenchus dipsaci infections may show no symptoms initially. Often, the overall absence of roots or the absence of roots on one side of the basal plate is a symptom of bloat nematode infection. Advanced symptoms include distinct swellings or “bloat,” and underdeveloped or deformed bulbs. Bloat-affected garlic bulbs are susceptible to secondary invaders such as Fusarium and other fungi, soft rot or other bacteria, and bulb mites. Garlic cloves heavily infected with Ditylenchus dipsaci may not store well, and nematode reproduction and damage to bulbs will continue and may increase during storage. 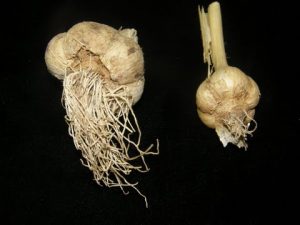 The absence of roots on a portion of the basal plate is a symptom of bloat nematode infection. Photo by S. Johnson. 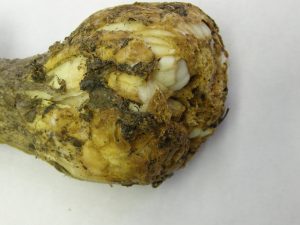 Advanced symptoms include distinct swellings or “bloat,” and underdeveloped or deformed bulbs. Photo by S. Johnson.

A test is no better than the sample taken. Clean test results are not a guarantee that the entire farm is free from bloat nematode, only that it was not detected in the sample. Periodic retesting of seed garlic may be warranted. Seed and soil testing for bloat nematode is not the same as a certification program. Presently, Maine has no certification program for garlic seed. The University of Maine Cooperative Extension testing service does fee-based Garlic Bloat Nematode Testing.

Bloat nematode is introduced and perpetuated primarily by planting the seed that is infected with the nematode. Do not plant any garlic from a crop that has bloat. If bloat nematode has been confirmed in a field, do not replant any garlic from that field. Bulbs from an infested field may appear symptomless, but could harbor low levels of bloat nematodes and will serve to perpetuate the issue. Such symptomless garlic has been planted, with disastrous results at harvest. It is unknown whether the nematodes could be harbored in bubils formed at the top of scapes, so avoid planting bulbils from an infected crop. Hot-water treatment of garlic planting stock is not recommended as a solution to infected seed garlic unless professional equipment is used.

Introduction of garlic planting stock from a source that is not known to be bloat nematode-free is fraught with risk.

The bloat nematode can be transported on clothing, shoes, and anything else that moves soil. Sanitation with quaternary ammonia materials should be considered as a defense against the introduction of the bloat nematode into previously clean areas.

What to do if you have garlic bloat nematode

No seed garlic should be planted or sold for planting from a field that has tested positive for bloat nematode. A garlic field that is separated from any infested field by at least 100 feet could be marketed for seed, assuming that it does not test positive. Bulbs from bloat nematode-infested fields may be sold for table use, but they should be clearly labeled for table use only.

The long-term survival potential and wide host range enable the nematode to persist in infested fields for long periods of time. Long rotations out of Allium crops (garlic, onions, leeks, chives), celery, parsley, or salsify, keeping weeds such as Canadian thistle and hairy nightshade to a minimum, and starting with bloat nematode-free planting material are primary management tools. A 5-year rotation (4 years between host crops) is a minimum. Bloat nematodes can also live in the soil and on alternative hosts.

A plow-down biofumigant crop will not eliminate the need for the long rotation. Discard infected bulbs and plants, bagged, into a landfill, not onto fields or into compost piles.

Garlic bloat nematode is a serious problem seemingly on the increase in Maine, causing economic loss and challenges for all who grow garlic. By learning about the pest and how it is spread, growers and sellers of garlic can take action to reduce its effects and slow its spread.