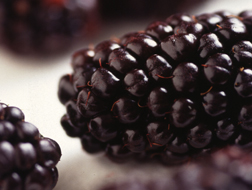 To get the most out of your raspberry planting, choose your site carefully. Raspberries prefer full sunlight and grow best in well-drained, sandy loam soils rich in organic matter. Avoid low areas that remain wet late into the spring, but select a site with access to a water supply. Irrigation is important for good plant growth during dry periods and can improve fruit size and yield. Do not plant raspberries where tomatoes, potatoes, peppers, or eggplant have been grown within the past four years, because these crops carry a root rot called Verticillium that can also attack raspberries. Destroy all wild raspberry and blackberry plants within a distance of 600 feet of your planting site if possible, to reduce the possibility that virus diseases might be spread to your planting.

Getting the soil ready for raspberries may take up to two years, depending on its condition. Test the soil to determine its pH and fertility levels. Raspberries prefer a soil pH of 5.6 to 6.2; acid soils may require applications of ground limestone to increase the pH. Soil testing information is available from your county Cooperative Extension office. You can improve the level of organic matter in the soil and discourage perennial weeds by sowing a cover crop such as buckwheat, rye, millet, or oats, and plowing it into the soil before it goes to seed. There should be time enough for two sowings in a single season. Applications of barnyard manure or compost and repeated tilling for a full season can be substituted for cover cropping. Be aware that animal manures may contain weed seeds that can become a problem in your planting later. In the spring of the planting year, spread 25 pounds of 10-10-10 garden fertilizer per 1,000 square feet of the planting site. Organic fertilizer sources such as compost, manures, sul-po-mag, and rock phosphate may be used in place of synthetic fertilizers. Apply enough of these materials to deliver two pounds each of nitrogen, phosphorus (P2O5) and potassium (K2O) per 1,000 square feet. Cultivate the soil several days before planting to incorporate the fertilizer and break up any clumps or clods.

The crowns and roots of raspberry plants are perennial, but individual canes live two years. Each spring, the plants produce canes (suckers) from buds on the crown and on underground lateral stems. These canes grow vegetatively during the first season, overwinter, and produce fruit during the summer of the second year, while new canes emerge to provide a crop for the following year. Second-year canes die shortly after fruiting. Everbearing raspberries bear a crop on the tips of first-year canes in the fall, followed by a typical summer crop on the lower portion of the canes the second year.

Although a wide selection of raspberry varieties is available, only a few will do well under the short growing seasons and severe winters of northern New England. Select only those that are rated very hardy with early or mid-season ripening.

In general, red raspberries are the hardiest type, followed by purple raspberries, black raspberries, and blackberries. Temperatures below 5°F will injure or kill blackberry and most purple and black raspberry canes, so these should only be planted in southern parts of Maine and New Hampshire, on protected sites.

Order your plants from a reputable nursery or garden dealer. Specify disease-free, virus-indexed stock. Most raspberries are sold as dormant, one-year-old canes, but some nurseries offer plants generated by tissue culture or micropropagation. Tissue-cultured plants may be more expensive, but they are less likely to have disease problems.

Plant raspberries early in the spring after the danger of severe frost is past (late April to mid-May). Do not allow plant roots to dry out before or during planting. Plants should be set at the same depth or slightly deeper than they were in the nursery. Firm the soil around the roots and water the plants. If one-year-old canes are used, cut them back to a height of four to six inches above the ground.

Red raspberry plants are typically grown in a hedgerow. Crowns should be planted about 2 feet apart in rows that are 8 to 12 feet apart. Choose the wider spacing if you’ll be using large equipment, such as tractors, in the planting. The plants will soon send up suckers from the roots and crowns to form a hedge, which should be maintained at 12 to 18 inches wide at the base.

Purple and black raspberries and blackberries only produce suckers from the base of the crown and will not fill out a hedgerow as red raspberries do. For this reason, they are frequently grown in the hill system to get the most production out of individual plants. For this system, set plants 4 feet apart in rows 8 to 12 feet apart.

All raspberries should be grown with some sort of a trellis. This will improve fruit quality, make harvesting easier, and reduce disease problems. Trellises also make pruning simpler by encouraging new cane growth in the middle of the row, rather than just along the outside edges. For plants grown in a hedgerow, the “T” or “V” trellis systems are recommended. 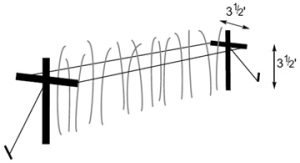 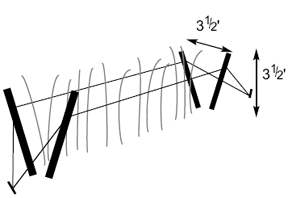 Figure 2. For the V trellis, two posts should be set at each end of the row at about a 30-degree angle so that they are 3½ feet apart at a height of 3½ feet. Run the wire from each post at 3½ feet. After pruning, tie the fruiting canes to the wires on each side. 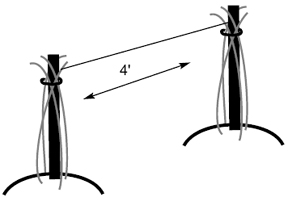 Figure 3. For black and purple raspberries and blackberries grown using the hill system, set a sturdy post next to each plant (four feet apart in the row). A wire can be run along all the posts in the row, about 4½ feet above the ground. The fruiting branches of each plant should be spread along the wire, or the canes of each plant can simply be tied to the post next to them.

Keep the planting completely free from weeds with shallow cultivation and hand pulling as necessary. Make sure the plants receive one to two inches of water a week for best growth. Mulch can be used to reduce weed problems within the plant rows and also to help retain soil moisture and add valuable organic matter. Spread wood chips, bark, pine needles, or rotted leaf mulch over the plant rows, and maintain it at a depth of three to four inches.

Starting the second year of the planting, a cover crop may be planted between the rows. Sow an annual cover crop, such as spring oats, just after harvest. The oats will help harden off the raspberry plants for winter by using up excess water and nutrients in the soil, and will also reduce weed growth. Oats will be killed by low winter temperatures, and the dead sod cover will reduce soil erosion in the spring.

A permanent cover crop may also be sown following harvest the second year. Sow a noncompetitive grass cover, such as a bluegrass-fescue mix, between the plant rows. Take care to prevent grass from spreading to within a foot of the raspberry plants, or it will compete with the raspberries for water and nutrients. Permanent sod covers allow easy access in the raspberry planting, prevent soil erosion and weed growth, and can be easily maintained by regular mowing.

Raspberries should be fertilized each year in the early spring (mid-April). Apply 20 pounds of 10-10-10 (or organic equivalents) per 1,000 square feet of the planting. Increase the rate to 25 pounds if a heavy mulch is being used.

It is best to split the application, applying half of the recommended amount in mid-April and the second half four to six weeks later.

Pruning is a vital part of maintaining a healthy raspberry planting. This practice greatly inhibits the spread of raspberry diseases and improves fruit quality and yield. During the summer months, regularly remove all new canes that emerge outside the desired plant row width of 12 to 18 inches. This improves light penetration and air circulation for the canes in the middle row that will fruit next year. Also, remove any canes that show obvious signs of insect or disease injury. In the late winter or early spring, before the buds break, remove all of the old canes that fruited the previous year. These have gray, peeling bark and branches (they are dead and won’t fruit again). Again, remove canes that have emerged outside of the desired 12- to 18-inch row width. Maintaining this narrow row width will assure adequate light penetration and air circulation to promote healthy cane growth and reduce disease problems. Only the most vigorous canes, those with the greatest height and basal diameter, should be left in the row. Continue thinning until only four to five canes per foot of row length remain. These remaining canes should be attached to the trellis wires with twine. Finally, remove all of the plant waste from the field. Plant waste can harbor diseases and insects that may attack healthy canes.

Everbearing raspberries can also be managed to produce only the fall crop. Simply mow all the canes down early each spring. During the summer, cut down any new canes that develop outside the 12- to 18-inch row width and thin the remaining canes to about six inches apart, leaving the sturdiest. This technique greatly reduces pruning labor but also eliminates the summer crop. Unfortunately, most everbearing cultivars, such as Heritage, produce the fall crop too late in the season to escape damage from frost in most of northern New England.

Blackberries should have the growing tips of the new canes pinched off when they reach four feet. This encourages the canes to form side branches, or laterals, which will bear the fruit in the following year. Remove all canes that fruited following the harvest. In the early spring, thin the remaining canes, leaving only five to seven of the sturdiest per hill. Cut the side branches back to 12 buds (usually about 12 inches in length) and tie the canes to the wire or post for support.

Remove all plant waste from the field after pruning and destroy it, preferably by burning. Leaving dead canes in the planting will encourage the spread of diseases.

All bramble fruit is extremely perishable and should be harvested frequently. To maintain fresh quality, place the fruit in shallow containers, no more than three berries deep, and cool the fruit to 33°F as quickly as possible. Fruit properly harvested and held at this temperature can maintain fresh quality for three to seven days. If the fruit is to be made into jam or jelly, process it immediately, or freeze it until ready to use.

A well-kept raspberry planting can provide fruit for 10 to 20 years, but weeds, viruses, fungi, and several types of insects can greatly reduce yield and may destroy the planting if they are not controlled. Many problems can be prevented by proper planning and care.

Select only raspberry cultivars that are very hardy and plants that are certified virus-free. If possible, destroy all wild brambles within 600 feet of the planting. Encourage good air circulation by having at least 8 feet between your plant rows and keeping the hedges to a 12- to 18-inch width. Prune your plants regularly to promote healthy new growth and reduce the spread of diseases. Keep the planting weed-free to discourage insect pests and prevent competition for water and nutrients.