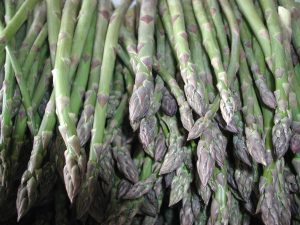 Asparagus (Asparagus officinalis) is a perennial crop that originated in Asia Minor but is now grown throughout the world. It has been cultivated for more than 2000 years for culinary and medicinal uses. Wholesome and nutritious, asparagus can be eaten raw or cooked, and is used fresh, frozen, or canned. In Maine, asparagus is one of the most popular early spring vegetables. Harvest in central Maine typically begins in early May.

The asparagus plant is composed of stems, called ferns, as well as a fleshy crown and an extensive root system. The spear— the portion of the plant that is harvested — is an immature fern. The ferns are the photosynthetically active portion of the plant, which collects light and produces energy. The ferns are not true leaves, but rather modified stems. The crown is a swollen underground stem or rhizome with two types of roots, which are continually replaced: fleshy and fibrous. The fleshy roots act as underground storage organs and survive for two to four years. The fibrous roots absorb water and nutrients and are short-lived. 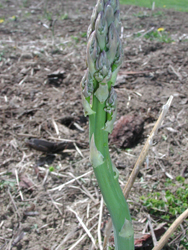 The asparagus spear — the portion we harvest and eat — is an immature fern. Photo by Mark Hutton. 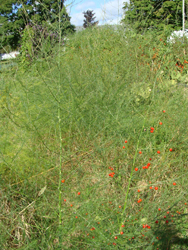 Unharvested spears mature into ferns. Female plants are less productive because they put their energy into fruit. Photo by David Handley.

Asparagus is dioecious, meaning that there are separate male and female plants. Male plants produce more spears than female plants because no energy is put into developing fruit and seed. Female plants produce red fruit containing seed that may develop into volunteer plants. These volunteers act as weeds, competing with the original plants for light, nutrients, and water.

Many hybrid asparagus varieties have been developed in recent years that are dramatic improvements over standard open-pollinated varieties such as ‘Martha Washington’. The new hybrid cultivars are predominately male plants. These plants live longer, tend to be more vigorous, and have greater disease tolerance than the old standards.

Purple Passion is a variety notable for having purple-colored spears, which are typically sweeter and more tender than green varieties. The spears, however, turn from purple to green when cooked. Yields of Purple Passion are not as high as hybrid male cultivars.

Asparagus plants can be started from seeds, transplants, or crowns. Using seeds allows planting of varieties for which crowns may not be commercially available. Direct seeding into the garden is unlikely to be successful, but transplants can be grown from seed in a greenhouse and then moved outdoors. Planting dormant crowns is the simplest and most common way to establish an asparagus bed.

Transplants can take 10 to 12 weeks from seeding to setting in the field. Growing asparagus from seed will delay harvest by an additional year. Transplants should be grown in large cell trays or individual peat pots. Asparagus will germinate best between 75°F and 80°F. Fertilize and water the seedlings as needed to maintain good growth, being careful not to overdo it. Place the trays or pots on hardware cloth or screen rather than a solid surface, to prevent the roots from developing a weak single taproot. 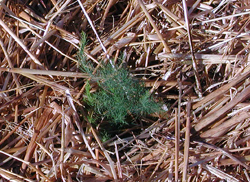 This newly transplanted asparagus was started from seed in a greenhouse. Photo by Mark Hutton. 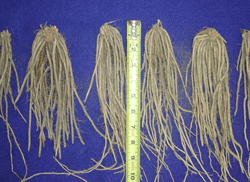 High-quality crowns of popular cultivars are available from many suppliers. Choose one-year-old crowns, if possible. Older crowns are more likely to be damaged, carry disease, and show poor vigor, in addition to being more difficult to plant. After you obtain your crowns, cut through several roots to check their internal color. Healthy roots will appear white. If the roots are reddish-brown inside, the crowns may be infected with Fusarium root rot and should not be planted.

A site with well-drained light, sandy soils, which is free of perennial weeds and receives full sunlight, is best for establishing an asparagus bed. Avoid locations with spring frost pockets and poor air flow. Areas previously planted to asparagus should be also avoided.

Best results are obtained when an asparagus bed site is prepared six months to a year before planting. Take a soil test as you begin to prepare the bed. The root system of asparagus is 6 to 12 inches deep. Therefore, soil samples should be taken to that depth. Amend the soil with lime according to test results to bring the soil pH into the 6.5 to 7.0 range. Lime should be incorporated to a depth of 10 to 12 inches. It may be necessary to lime the soil regularly to maintain proper pH. Test the soil every two years to determine if pH corrections are necessary. If possible, summer and winter cover crops can be grown prior to planting and turned into the soil to build organic matter and suppress weeds.

Phosphorous fertilizer is important for good root growth and early establishment of the bed. The soil test will indicate how much to apply. One-third of the recommended rate of phosphorous should be tilled into the bed before planting, along with any other fertilizer recommended by the soil test. The remaining two-thirds of the phosphorus should be placed in a band in the furrow at planting.

There is considerable debate over how much asparagus to plant to have an adequate supply. A good rule of thumb when planting the newer hybrid varieties is to plant five crowns per person. This should provide an ample amount for table use, with perhaps some left to freeze or can.

Asparagus rows should be spaced five feet apart, with the crowns or seedlings spaced one foot apart within a row. If possible, orient the rows parallel to the prevailing winds to help keep the ferns dry and reduce foliar diseases. Spacing rows closer than five feet is likely to increase disease problems. Crowns or seedlings should be set into the field after the danger of frost has passed and the soil has warmed to above 50°F. 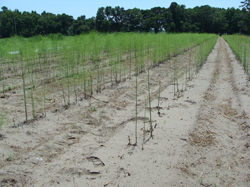 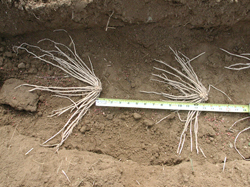 Plant crowns in furrow wide enough to spread out the roots (six to eight inches). In light sandy soils make the furrow 6 to 8 inches deep. In heavy silt or clay soils make the furrow only four inches deep. Planting crowns too shallowly will encourage spears to emerge too early, making them more susceptible to frost injury. Shallowly planted crowns also tend to produce small-diameter spears. After the crowns are placed in the furrow with the roots spread out, cover them with about two inches of soil. Then gradually fill in the furrow through the summer as the ferns grow.

If asparagus plants suffer from drought stress, they become weak and more susceptible to insect and disease attack. It is important to keep new plants well watered while the planting is becoming established. Be prepared to apply one inch of water a week to the bed during the first three years to encourage good establishment. Drought stress during the summer after harvest can reduce the yield and spear size of the next year’s crop.

It is important to allow the newly planted asparagus to become well established before any spears are harvested. To help ensure the development of large, healthy crowns, delay harvest until the second year after planting for crowns, and until the third year after harvest for seedling-established beds. Harvest spears for only two weeks in the first harvest year, three weeks in the second harvest year, and four weeks in the third year. Here in Maine, harvest should not go beyond June 15. If harvesting continues into the summer, fern growth will be insufficient to support strong crowns and buds for next year’s crop.

Asparagus spears should be harvested when they are six to eight inches tall. The spears can be cut using a sharp knife or dandelion digger or snapped about an inch below the soil surface. Care must be taken to not cut too deeply, which would cause damage to emerging spears. Harvest all spears, even small-diameter ”whippy” ones. Such clean cutting during the harvest season is important for two reasons:

Harvested spears should be stored upright at 35°F to 40°F, with high humidity. When held under proper conditions, spears can keep for 10 to 14 days. Chilling injury, manifesting as pitted, water-soaked spots, can occur at storage temperatures below 35°F. Storage temperatures warmer than 40°F allow spears to continue growing, reducing sugars and increasing toughness (fiber).

Annual Care of the Bed

If you keep backyard poultry, your birds can be allowed to forage in the asparagus beds through the summer, up to the first of September. The birds are natural predators of many insect pests and may also help control some sprouting weeds. Do not allow poultry into the planting in the spring before or during harvest, as bird droppings can contaminate the spears with bacterial pathogens such as Salmonella and E. coli. 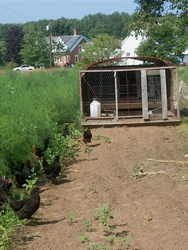 After asparagus harvest is over, chickens can help control insect pests and weeds. Photo by Mark Hutton. 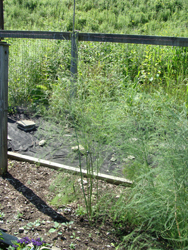 Allow ferns to grow after the season’s final harvest. Photo by David Handley.

Asparagus ferns should be allowed to grow after the final harvest of the season. The top growth produces carbohydrates that are stored in the fleshy roots to supply energy for the next season’s growth. In the fall, the tops can be removed and disposed of after they yellow and die. Taking the tops out of the field may help reduce disease incidence the following year.

Asparagus is a very poor competitor against weeds. Controlling weeds in asparagus beds is by far the greatest challenge to having a long-term productive planting. Be sure to eliminate all perennial weeds at the start of bed preparation. In the early years of bed establishment, the asparagus will benefit by clean cultivation, keeping the row free of any weeds by hoeing or pulling weeds. Organic mulches, such as grass clippings (non-herbicide treated), straw/hay mulch, or bark mulch can be applied to suppress weed growth. However, the addition of organic mulches has its own problems, such as the introduction of weed seed, or the creation of future cultivation or hoeing difficulties.

Asparagus has relatively few insect pests in the home garden. Asparagus beetles and spotted asparagus beetles are the most common pests. These beetles emerge from overwintering locations to feed on spear tips and buds just as the spears appear. Damaged shoots are disfigured, scarred, and often brown. 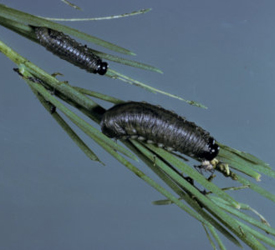 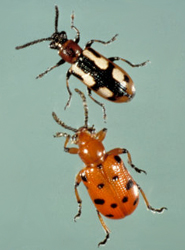 Practicing good sanitation in and around the asparagus planting will reduce overwintering sites for the adults and decrease the number of adults that survive the winter. Prompt, thorough, and clean-cut harvest, i.e., removal of all spears, including those too slender to eat, helps prevent the establishment of larvae in the spring. Handpicking beetles can be an effective control method to reduce populations for a small number of plants. On large plantings, or in the presence of high beetle populations, spraying with botanical or synthetic insecticides may be required.

Japanese beetles, cutworms, and aphids are other potentially serious pests of asparagus.

Site selection, disease-resistant variety selection, and proper soil preparation are the most important tools available to the home gardener to manage diseases of asparagus.

Asparagus rust (Puccinia asparagi) is another potentially devastating disease of asparagus. Look for light green oval lesions on the shoots. The lesions eventually become tan and then black, forming protruding blisters later in the season. Good sanitation, removal of infested ferns, and mowing at the end of the season will help reduce disease inoculum. Planting practices that promote rapid drying of foliage during the day will also reduce disease incidence.