Blueberries are native to North America, and the delicious fruit has been harvested in the wild for centuries. However, growing blueberry plants in gardens and on farms is a relatively recent occurrence, since breeding and propagation of blueberry plants did not begin until early in the 20th century.

Highbush blueberries belong to the same family of plants as cranberries, rhododendrons, and azaleas. They have limited adaptation to the cold winter temperatures of northern New England but may grow satisfactorily on warmer, protected sites where the winter temperatures do not fall below -25 degrees F.

Selecting and Preparing a Planting Site

Choose a planting site with full sunlight and protection from strong winds. Avoid low areas that drain poorly or are prone to early frosts. Blueberries prefer a well-drained, sandy loam soil, rich in organic matter. Heavy clay soils should be avoided, but may be made more suitable for blueberries with the addition of organic matter such as peat moss, rotted or aged sawdust, and/or compost. All perennial weeds should be eliminated from the site before planting. If necessary, grow cover crops such as buckwheat, rye, or oats on the site and plow them under for one to two seasons before planting blueberries to eliminate the weeds. Planting cover crops will also add valuable organic matter to the soil.

Have your soil tested to determine its pH and fertility status. Unlike many other garden crops, blueberries require relatively acid soil for good growth. The soil pH should be within the range of 4.5 to 5.2. Soils with a higher pH may require additions of finely ground sulfur or aluminum sulfate to lower the pH. It requires approximately 1.2 pounds of ground sulfur, or 7.2 pounds of aluminum sulfate, per 100 square feet to lower the pH of a loam soil one half of a pH unit (e.g. 5.0 to 4.5). Sandy soils require only half these amounts to accomplish the same pH change. Follow the recommendations of your soil test results. Soil tests are available through your University of Maine Cooperative Extension County Office.

Because of Maine’s cold winter temperatures and short growing season, you should select blueberry varieties that are described as very hardy and that ripen early or midseason (Table 1). It is usually best to plant more than one variety. Although some blueberries are self-fruitful, cross-pollination among different varieties will improve fruit set and fruit size. In addition, using two or more varieties that ripen at different times will lengthen the harvest season.

Plant blueberries in the early spring. Healthy two- or three-year-old plants from a reputable nursery generally perform best. Younger plants, such as one-year-old rooted cuttings, tend to grow very slowly for the first two years and take longer to bear large crops of fruit. Plants older than three years are more expensive and the additional cost is usually not justified by earlier production.

Space the plants five to seven feet apart in rows eight to ten feet apart. Dig a planting hole about two times the diameter of the plant root ball. Blend the removed soil with premoistened peat moss, compost, or rotted sawdust in a 1:1 ratio. Set the plants slightly deeper than they were in the nursery and fill the hole with the soil mixture. Do not place any fertilizer in the planting hole. Water the plants thoroughly immediately after planting. Prune out any dead, weak, or broken branches.

After planting, apply a four- to a six-inch layer of mulch around the base of the plants to conserve soil moisture and reduce weed growth. Coarse sawdust, woodchips, shavings, bark, pine needles, or composted leaves can be used as mulching materials. Make sure the mulch is free of weed seeds. The soil should be moist before the mulch is applied. A new layer of mulch should be applied when the old layer starts to break down.

Three to four weeks after planting, apply two ounces of a balanced fertilizer (e.g. 10-10-10) or one ounce of ammonium sulfate around each plant. Organic equivalents, such as bloodmeal or composted manure, may also be used. Apply the fertilizer in a circle 15 to 18 inches from the base of the plant. Use the same amount the year after planting. Each year following, increase the amount of fertilizer according to Table 2. Fertilizer can be applied once in the early spring or, for best results, split the application, and apply one half of the recommended rate in the early spring and the other half four to six weeks later. Blueberry plants generally do not require high amounts of fertilizer. Over-fertilization could lead to excessive tender growth and increase the potential for winter injury.

The plants should be watered regularly throughout the growing season. A blueberry planting should receive one to two inches of water per week. 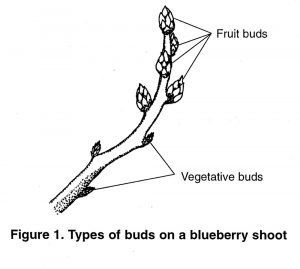 Blueberry bushes should be pruned every year to produce high yields of good quality fruit. Prune the plants when they are fully dormant during the late winter or early spring (January through March). For the first two years after planting, simply remove any dead branches and all weak, spindly growth. For plants that have been established for three years or more, follow these steps: 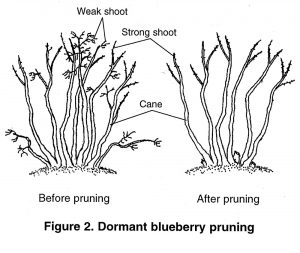 Fruit should begin to ripen in mid to late July and peak production generally occurs from early to mid-August. The fruit is borne on clusters of five to eight berries that ripen in succession over a period of several weeks. Pick the berries only when they are fully ripe, generally one to three days after they turn blue. Be sure there is no tinge of red color on the fruit before harvesting.

Although blueberries are not bothered by many pest problems, it is wise to become familiar with the different blueberry pests, their life cycles, and the damage they cause. The key to good pest management is prevention. Keep your planting free of weeds. Weeds compete with blueberries for nutrients and water, and may also harbor insects and diseases.

The most common insect problem in blueberries is the blueberry maggot. This is the larva of a small fly that feeds inside the developing fruit. It can be managed with appropriate insecticide sprays applied when the fruit starts to color — or with baited traps.

The most common disease problem for blueberries is mummy berry. This is a fungus that causes the fruit to shrivel and turn hard. It may be managed with fungicides applied in the early spring, or by vigilant removal of all the infested fruit (“mummies”) from the planting every year to prevent new infections.

Birds are typically the most serious pests of blueberries. Covering the plants with netting is the most effective control. Plastic or cloth netting is available through garden supply dealers. It is best to use a post and wire frame to support the netting over the plants. This will provide the best protection of the fruit and prolong the usable life of the netting. Drape the netting over the frame just as the first berries begin to turn blue. Be sure the edge of the netting is weighted or staked to the ground to prevent birds from getting under. Remove the netting as soon as all harvesting is complete, and store it in a cool, dry place. This will prolong its useful life.

For information regarding the identification and management of insect and disease pests, contact your University of Maine Cooperative Extension county office.