Rhizoctonia disease of potato often referred to as black scurf, is caused by the fungus Rhizoctonia solani Kühn. The disease is found in most potato-producing areas of the world.

It was reported in Maine in 1913 by Morse and Shapovalo in the Maine Agricultural Station Bulletin #230, “The Rhizoctonia Disease of Potatoes.” This bulletin presents a very good explanation of the disease symptoms and control.

The importance of the Rhizoctonia disease complex of potatoes has long been debated. It is now considered a major cause of crop losses in Maine and potato-producing areas.

There are two phases of the disease: the stem and stolon phase and the tuber phase. The former usually occurs early in the growing season in the form of lesions or nipping off of the growing tips of sprouts, stems or stolons. This can occur throughout the growing season.

The pathogen overwinters as sclerotia and mycelium on infected tubers, in plant residue, or in infested soils. High soil moisture, cool temperatures, high soil fertility and a neutral to acid soil (pH of 7 or less) favor development of the disease. A whitish mold can be formed on stems just above the soil line. This mold is the sexual stage of the fungus. Its role in the disease complex is not well known. When it is observed, stem lesions are often severe. 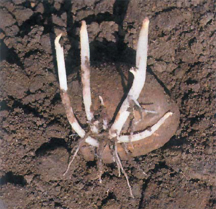 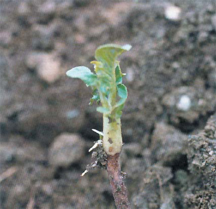 The symptoms of the disease are found on both above- and below-ground portions of the plant. Sprouts are often attacked before emergence. The growing tip may be killed or have reddish- to dark-brown cankers. Damage at this stage results in skips or delayed emergence and is expressed as poor and uneven stands.

Potato plants affected at this stage are characterized by a lack of vigor because much of their energy has been used to produce secondary or tertiary sprouts before a plant emerges. Sometimes, a heavily infested seed will not produce an above-ground plant. Instead, it will produce a stolon with several small tubers. This symptom is referred to as “no top” and can be confused with the same symptom caused by physiologically old seed that has been desprouted.

Stolons and roots, like sprouts, can be killed by the pathogen. The root system is reduced when this occurs. The number, shape, and size of tubers produced are also affected when the roots and stolons are attacked.

Early in the disease development, the stolons, roots, and stems have reddish-brown to brown lesions. As the stem lesions mature, they become cankers that are rough, brown and can have craters, cracks or both. If the cankers girdle the stem, they will interfere with the normal movement of water and carbohydrates within the plant. Often stunting or rosetting of the pant will develop. A leaf curl, which can be confused with symptoms of the Potato Leaf Roll Virus, has been reported in severely infected plants.

The interference of carbohydrate movement may also cause the formation of aerial tubers in the leaf axils of stems and the formation of many small, misshapen tubers. These affected plants are more erect and frequently are more difficult to kill with vine desiccants. This symptom can be observed after vine kill when individual plants are standing erect in an open field where most of the plants are dead.

Tubers are affected in many ways by this pathogen. The main symptom observed is the black sclerotia on the surface, thus the name black scurf. These sclerotia are not easily removed. They do not affect the interior of the tuber. In severe cases, many small, misshapen tubers form in a tight cluster next to the stem.

Other tuber symptoms include necrosis in the stem end, russeting, cracking, knobbiness, infected lenticels, and malformed tubers. Both phases of this disease result in the reduction of marketable yield. Seed tubers infested with sclerotia and mycelium are major sources of inoculum for future crops. 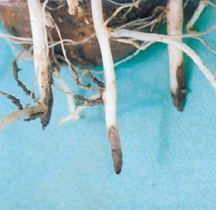 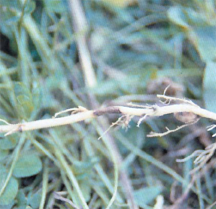 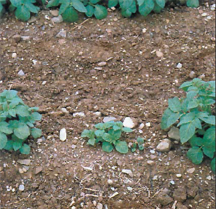 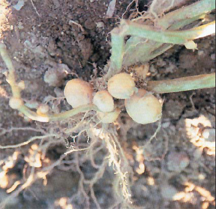 Small tubers formed in a tight cluster next to the stem. 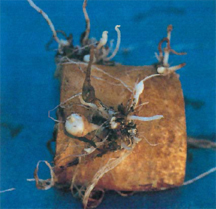 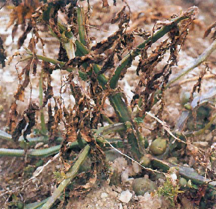 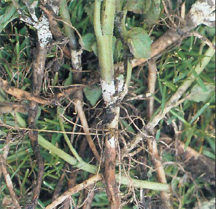 Currently, there is no completely effective control of this disease, but there are practices that will reduce the severity of it. The causal organism lives in soil on organic matter and has a wide host range. To date, no variety has been found with immunity to the sprout nipping and stem lesion phase. Some varieties show varying degrees of resistance to the formation of sclerotia on tubers.

Plant certified seed free of sclerotia. If more than 20 sclerotia are visible on one side of washed tubers, consider using a different seed source. Tuber inoculum is more important than the soil inoculum as the primary cause of disease. Seed growers should plant only sclerotia-free seed.

Avoid planting in cold, wet soil because it reduces the rate of sprout growth and is optimum for the disease to occur. Cover seed with no more than two inches of soil to promote rapid emergence and less chance for infection of sprouts and stems. A level of resistance to Rhizoctonia infection is imparted to an emerging plant with light interception. Therefore, the faster a plant emerges, the less chance there is for infection to occur.

Practice good rotation and, at a minimum, avoid two consecutive seasons of potatoes on the same land. This reduces both the incidence and severity of the disease. Rhizoctonia does not compete exceptionally well with other microbes in the soil. Increasing the rate of crop residue decomposition and the amount of organic matter in the soil decreases the growth rate of Rhizoctonia.

Residue decomposition releases carbon dioxide, which reduces the competitive ability of Rhizoctonia. Since Rhizoctonia is not an effective cellulose decomposer, soil populations are greatly reduced by competing microflora and less disease is observed with good rotation. As soils become devoid of organic matter, Rhizoctonia becomes a competitor and flourishes. Planting potatoes in low organic matter soils with high Rhizoctonia populations encourages the growth of the pathogen and an increase in disease. Different soils and different crops incorporated into the soil have varying effects on Rhizoctonia growth and development.

Potatoes should be harvested as soon as the skin is set so minimal bruising will occur. The percent of tuber coverage with sclerotia increases as the interval between vine kill and harvest is lengthened. Vine removal or burning reduces the amount of fungus overwintering and thus the amount of inoculum available to infect future potato crops. Do not dump infested tubers on future potato fields. They can become sources of inoculum. Chisel plowing has been shown to reduce the incidence and severity of the disease.