The annual weed, hairy nightshade, belongs to the same genus as potato — Solanum — and is therefore susceptible to many of the same insect and disease pests. Its potential to harbor pests of concern to potato producers, along with its propensity to populate potato field headlands, makes it an increasingly significant weed. Moreover, most management practices have established only fair control of this weed.

Hairy nightshade, Solanum sarrachoides, is the most widespread of the five nightshade species in North America. It is a common weed of disturbed habitats such as roadsides, rights-of-way, grazed rangeland, flowerbeds, vegetable gardens, and cultivated fields. Its occurrence in Maine was relatively unnoticed until 2004. The nightshades, as a family, are of concern in grain crops due to growth and harvest interference, and in livestock grazing due to the potential for poisoning caused by high alkaloid concentrations in their seeds. Since the turn of the new century, hairy nightshade has become an increasingly important pest in western United States potato production areas, where it is now a priority weed issue.

Hairy nightshade is an annual weed species, surviving only one season. Belonging to the Solanaceous family, hairy nightshade has an appearance similar to that of potato and tomato. Leaves are alternate and egg-shaped, and stems are generally light green, and round to angular in shape. Both leaves and stems are distinctly covered in glandular hairs. Flowers of the hairy nightshade are white with five petals. Berries are typically light to dark green, even when mature. 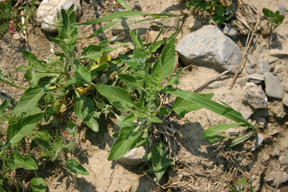 Propagation results from the production of true seed that may be dispersed by rodents, birds, livestock, and mechanical disturbance (i.e., typical farming practices such as spraying, cultivation, and tillage). This weed can produce an immense amount of seed, with references citing tens of thousands per plant.1

Germination of hairy nightshade often occurs throughout a growing season. Temperature ranges for germination of this weed are 66°F to 102°F, with the optimum temperature between 80°F and 91°F. Germination is also greatly affected by soil moisture, and significant decreases in germination occur as soils become drier.

Hairy nightshade is well adapted to a broad range of pH levels, ranging from a pH of 4 to a pH of 9. Maximum emergence of this weed occurs at about 2cm below the surface and decreases to its limit of approximately 8cm below the soil line.1

Observations of the weed in Maine since its initial observation in 2004 suggest that it is a relatively new weed to the region, most likely establishing here before 2004, but at densities low enough to go undetected.2,3 Typical populations around the potato-growing areas in which it is occurring suggest that it’s a weak competitor, substantial populations only occur within the 6 to 12 feet of cultivated headlands outside of potato fields. However, at several index sites, the fields in which hairy nightshade was first discovered, the weed has been observed within the field, and at densities likely to cause interference with the potato crop.4

The potential repercussions of hairy nightshade occurring in our potato production area are different than those associated with most weeds. Most of the weeds common to our production area are controlled on the basis of resource competition since the weeds are competing with the potatoes for resources such as nutrients, water, and sunlight. Hairy nightshade, however, poses a dual threat to potato production: its close relation to potato means that it can successfully harbor many of the same insect and disease pests that potato does. The occurrence of potato late blight, potato virus Y, potato virus A, potato leaf-roll virus, and the hosting of green peach aphid and Colorado potato beetle have all been documented on hairy nightshade by researchers from around North America.

Potato late blight, Phytophthora infestans, was detected by the University of Maine Cooperative Extension at several fields in the Aroostook County potato production area on hairy nightshade in the 2004 cropping season. Hairy nightshade poses a threat as a potential source of inoculum for late blight. There are several scenarios in which hairy nightshade could be a key component in late blight spread. Fields in rotation may harbor this weed and may act as intermediate infection points and inoculum sources for adjacent potato fields. Headlands of potato fields, which are typically disturbed through tillage and cultivation, appear to be the most compatible areas for hairy nightshade to emerge and propagate with little competition. These headlands, since they are not part of the potato production area of the field, may receive little or no application of late blight fungicides throughout a growing season. This may lead to a situation in which there is late blight-susceptible foliage, provided by the hairy nightshade, directly adjacent to a potato field. It is suspected by UMaine researchers that hairy nightshade, being an annual, does not pose a threat in serving as an overwintering source for potato late blight inoculum.

Management of hairy nightshade has been difficult since it germinates over an extended period of time. Dramatic increases in its seed bank arise from its typical late emergence, which occurs after weed control measures have been completed.

Selection of herbicides for use in accordance with specific rotation crops may also be implicated in population increases of this weed. For instance, herbicides selected for broadleaf rotation crops such as canola and broccoli may have fair to poor efficacy against hairy nightshade, allowing for seed bank buildup. Pre-emergence applications of herbicides labeled for potato have shown only fair control of hairy nightshade. Post-emergence applications have generally yielded better results. The general sentiment regarding chemical control of hairy nightshade is that it may be best to apply herbicides when a field is in rotation; specifically to small grains.

Cultural practices such as tillage and cultivation may affect hairy nightshade germination and seed production. Comparisons of mold board and chisel plowing indicate that seed densities of this annual weed increase more rapidly with chisel plowing than with mold board plowing. This is most likely because of chisel plowing’s tendency to move the weed seed table closer to the soil line.5

Mechanical control of emerged hairy nightshade in the headlands of potato fields may be accomplished by disking or mowing. Mowing may help prevent seed production, reducing the seed bank. Disking does the same but has the added benefit of killing and burying the live tissue that serves as an infection source for potato late blight.

The future of hairy nightshade and its effects upon Maine’s potato producing areas is relatively unknown. The current focus of research and education efforts is to limit its spread, evaluate control tactics, and determine the various impacts the weed has upon our local production. Growers need to be vigilant in their scouting as early detection of this weed on their farm will allow them to manage their crops accordingly.