Many farmers and gardeners in Maine saw late blight on their potatoes and tomatoes for the first time in 2009 and experienced firsthand the amount and speed of crop destruction that it can cause. Introduction and widespread distribution of the late blight pathogen into Maine occurred during late June and July when potato and tomato plants were growing rapidly. Then extended periods of rainy and humid weather hit Maine, completing the disease triangle of pathogen, host, and environment. The results were devastating to the tomato and potato crops in many areas.

Few plant diseases in history can rival the widespread misery and despair that potato and tomato late blight can cause. Between 1845 and 1860 one million people died in Ireland alone as a direct consequence of famine, and one and a half million emigrated from Ireland. The “hungry forties” in England and other parts of Europe were also a result of potato late blight.

Late blight is caused by Phytophthora infestans, a fungus-like organism. This pathogen is an obligate parasite, which means that it can only survive on a host: it cannot live in soil or dead plant debris. This organism will not survive long in soil or away from association with a living host.

How do I recognize late blight?

Late blight lesions can occur on all aboveground plant parts of tomatoes and potatoes. Leaf lesions first appear as fast-growing, irregularly shaped, pale to dark‑green water‑soaked spots. These usually appear at the tips of the leaves or on actively growing tissue. The lesions enlarge rapidly and form brown to purplish‑black areas of dead tissue with indefinite borders. A yellowish‑green halo will usually surround these lesions. In cool, wet weather or other humid conditions, a ring or surface of white fungal growth may appear at the edge of the lesions on the underside of the leaves. Lesions are often covered with a glistening white growth of fungus. In cool, wet weather, late blight may move rapidly from leaves to petioles and stems, and infect an entire field in only a few days. In dry weather, the water‑soaked halo disappears from the lesions and the dead tissue becomes brown and dry. 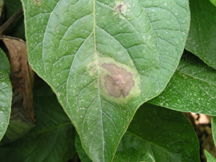 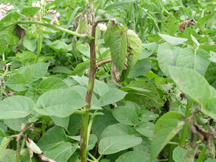 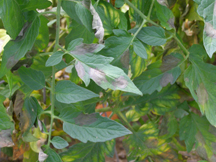 Tomato fruit can also succumb to late blight. Fruit can be affected from green stage through the ripening. Late blight-infected fruit starts as water-soaked areas and then darken and enlarge. These eventfully become brown and may have a leathery appearance.

Does late blight affect plants other than potatoes and tomatoes?

Late blight can infect some nightshades, petunia, many wild relatives of potatoes, and some ornamental plants, many of which are closely related to potatoes. However, while these plants can be affected, the risk of an epidemic on them is low.

If your garden area is free from plant debris, and your compost pile is free from living plants, last year’s infected tomatoes and potatoes will not affect this year’s garden. While you should rotate vegetable planting areas from year to year, the pathogen that causes late blight does not overwinter in the soil under our conditions.

A new growing season is coming. What do I do about potato and tomato late blight?

Don’t plant any saved potato tubers. Growers should plant certified seed free of late blight, and eliminate cull piles and volunteer potatoes. The addition of a seed treatment effective in reducing late blight should be considered.

There are no truly resistant varieties but there are some varieties that tolerate late blight better than others. Two white-fleshed varieties with late-blight tolerance are Kennebec and Sebago.

Plant tomatoes from seed, or use locally grown tomato seedlings

Starting your tomatoes from seed will ensure that you start with disease-free plants, as the pathogen that causes late blight won’t survive in true seed.

If you buy seedlings, know your source. Buying locally grown seedlings drastically reduces the possibility that late blight could be introduced from another area. Late blight will not survive on stakes, trellises, or cages from an infected field. See Cornell’s Performance of Tomatoes (all Solanum lycopersicum unless noted) (Hybrids, Open Pollinated and Heirlooms) for Late Blight (LB) and Early Blight (EB). – T. A. Zitter, Department of Plant Pathology Cornell University, March 2010 (PDF) for the response of different tomato varieties.

Home gardeners should contact their county University of Maine Cooperative Extension office to get a diagnosis. With a proper diagnosis, the appropriate response will be suggested. However, once late blight reaches a high proportion in the field, fungicides will not control it and the field will quite likely reach 100 percent infection. Under some conditions, plant removal or chemically killing portions or an entire planting is recommended as a control measure for late blight.