The disease, potato mop-top, is caused by the virus, potato mop-top virus (PMTV). PMTV is in the viral genus Pomovirus and is a Furovirus (fungus-transmitted, rod-shaped virus). PMTV was first reported in Britain in 1966 and subsequently discovered in cooler areas of Europe, in the Andes of South America, and in Asia. PMTV was reported in Canada in 1991-92 and in the U.S. in 2002.

While PMTV has only been known since 1966, it is transmitted by powdery scab, a disease with a longer, world-wide history. Powdery scab was first discovered in Germany in 1841, was found throughout Europe by 1855, and is believed to have spread from South America, where it was eventually found in 1891. It was first discovered in New Brunswick in 1913, and later that year in Maine. Powdery scab was traced to potatoes imported from Ireland in 1912. During that time, USDA researchers presumed that Maine’s outbreaks were fairly recent and derived from New Brunswick. As a result of the presence of the disease, Maine was quarantined, but the quarantine was lifted when powdery scab was recognized in a number of states.

PMTV is vectored by the pathogen that causes powdery scab disease in potatoes, Spongospora subterranea f. sp. subterranea, which is present through-out the world. PMTV is not naturally transmissible by aphids or other vectors, but it may be artificially transmitted to some hosts by grafting. PMTV is retained in S. subterranea spore balls. The degree of transmission through seed tubers is variable, and in the absence of powdery scab, it is thought that PMTV may be “self-curing” after three generations. That is, in the absence of the vector, plants may become free of the virus after three generations. Movement of the virus within host plants appears to be local or through the xylem but requires movement factor proteins for cell-to-cell movement. In host plants, PMTV has been found in leaves and in cytoplasm.

Powdery scab develops from S. subterranea only if conditions are favorable. S. subterranea prefers poorly drained soil and can be infectious across a pH range from 4.7 to 7.6. While it flourishes in soil temperatures less than 68 degrees F, the range for infection is between 52 and 75 degrees, with an optimal infection temperature of 60. Powdery scab is most severe when there is more than 15 percent moisture. High soil moisture early in the season with a gradual drying out is thought to encourage the development of powdery scab.

Soil can be infested with S. subterranea without powdery scab occurring if the environmental conditions required for disease development are not met. Powdery scab can occur without PMTV being transmitted. The mop-top virus can survive in this pathogen from 10 to 18 years after previous potato crops. The distribution of infested soil or infected tubers can serve to disseminate the PMTV vector.

Powdery scab and PMTV are generally associated with cool and wet soils, regions, and seasons. Wet soil conditions are particularly favorable to disease development during early tuber initiation when potatoes are most susceptible to powdery scab. Precipitation at this stage is a good predictor of PMTV incidence.

PMTV, being associated with powdery scab, seldom occurs in areas with less than 30 inches of rain per year, increasing thereafter to a high likelihood of occurrence in areas above 45 inches of rain per year. Powdery scab, and therefore PMTV, may occur in warmer, drier areas that are irrigated. Higher soil organic matter may increase infection if it improves moisture retention, or decrease infection if it improves soil structure and drainage. Soil compaction generally increases infection by impeding drainage.

Tuber symptoms are called “spraing.” Spraing describes the rust-brown discoloration, in the form of arcs or rings and flecks, that appears with internal rust-colored spots on tubers. There may be single or multiple concentric arcs, which extend to the skin surface in some cases. This type of symptom is also shared with the tobacco rattle virus (TRV), which causes corky ringspot of potatoes, a nematode-vectored disease. TRV is frequently grouped with PMTV in European countries for regulatory efforts, as the tuber symptoms appear similar. The infection normally remains concealed in the flesh of the tuber, but sometimes reveals its presence on the surface. Spraing, which in reality is an attempt to repel a virus infection, can on occasion, develop to the stage where the infected site falls out like a plug. In some cases, tubers may be deformed (constricted and bent). Tubers grown from PMTV-infected seed may not be infected with PMTV, and tubers infected with PMTV may not show symptoms. Not all stems produced by a PMTV-infected tuber may become infected.

Emergence from infected seed can be delayed and uneven. Spraing appearance and severity differs with variety, hill position, and environmental conditions. Symptoms at harvest are more common in tubers closer to the soil surface, presumably because temperatures there are more variable. Symptoms are seldom centered on a powdery scab lesion. Usually, few symptoms are present at and just after harvest, but expression increases with further storage. Cutting tubers at harvest may stimulate spraing development. Storage temperature and fluctuation are important in symptom expression. More symptoms occur at storage temperatures of 46 to 57 degrees F than at 37 to 39 degrees F. Initial storage at 64 degrees for two weeks, followed by storage at 41 to 55 degrees, induces symptoms. Tuber symptoms tend not to develop with constant 72 to 77 degree or 41 to 55 degree temperatures. Symptom development after a storage regime of one week at 64 degrees and two weeks at 46 degrees is considered to be a reasonable indication of the final amount of spraing. Repeated cycles increase symptom development and are used as a screening technique. The degree of tuber infection is not a direct indication of infection and spore production in the root system. Yield may or may not be affected. The primary source of loss is a decrease in potato quality because of internal symptoms.

A number of plant families are susceptible to infection by powdery scab, although only potato and black nightshade (Solanum nigrum) are known to produce long-lived resting spores. The pathogen can infect a limited number of other plant species but does not form spore balls on these other plant species.

There is no good control for this disease. Apart from varietal selection and certification programs designed to detect or flush out viruses, control of PMTV is generally directed at its vector, Spongospora subterranea f. sp. subterranea—the organism that causes powdery scab. Using clean seed and minimizing the spread of soil and other forms of contamination restricts the spread of the pathogen. Infection may be reduced, in some cases, by improving drainage, reducing irrigation during early tuber development, and delaying planting until soils are warmer or drier. Seed treatments may help reduce the spread of the pathogen from infected seed. Soil treatments may reduce numbers of viable spores. No maximum survival time has been determined for powdery scab spores. Some reductions in powdery scab have been reported in rotations with brassicas and datura (a weed). While the powdery scab organism and PMTV are reported to persist in soil for more than a decade, longer rotations will reduce the severity of scab, and therefore reduce the transmission of PMTV. 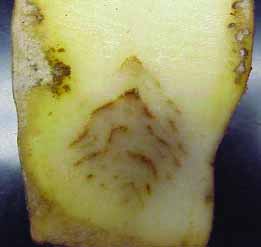 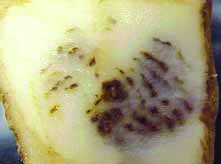 Spraing describes the rust-brown discoloration, in the form of arcs or rings and flecks, that appears with internal rust-colored spots on tubers.

The University of Maine is an EEO/AA employer, and does not discriminate on the grounds of race, color, religion, sex, sexual orientation, transgender status, gender expression, national origin, citizenship status, age, disability, genetic information or veteran’s status in employment, education, and all other programs and activities. The following person has been designated to handle inquiries regarding non-discrimination policies: Director of Equal Opportunity, 101 North Stevens Hall, University of Maine, Orono, ME 04469-5754, 207.581.1226, TTY 711 (Maine Relay System).