Streptomyces scabies is a saprophyte that can survive for long periods on decaying soil organic matter in the absence of hosts. Susceptibility to S. scabies increases from about pH 5.2 to an optimum of between 6.0 and 7.5. The pathogens can tolerate a wide temperature range, but the optimum range for infecting tubers is between 70 and 75°F.

The pathogens enter through wounds, lenticels, or directly through the skin of young developing tubers and stimulate the growth of corky tissue. Lesions expand as the tubers expand. The pathogen produces spores in the lesions.

Increased populations of the pathogens can occur with repeated plantings of susceptible crops. The addition of manure may increase scab severity by providing a substrate for the organism, by increasing soil pH, or by being contaminated from animals fed scabby potatoes. Rotation with nonhosts will reduce but not eliminate the pathogen. Streptomyces spp. can survive in the soil as saprophytes. Infected seed serves to distribute the pathogen. Neither the pathogens nor the disease develops on tubers in storage.

Potato scab lesions on tubers can be quite variable but generally appear as rough, corky lesions, which may range from small and raised to deeply pitted. Initially, infections appear as small tan to reddish-brown spots on the tuber surface. Pitted scab can be as deep as one-half inch into the tuber. Tubers with russetted scab can have large areas superficially covered with corky tissue. 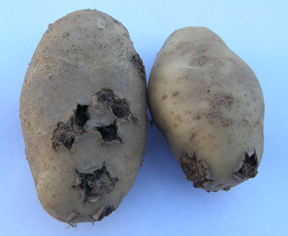 Tubers with deep-pitted scab symptoms. Photo by Steven B. Johnson. 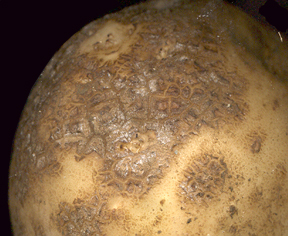 Infections can also occur on the stems, stolons, or roots. Russetted varieties tend to be less affected than smooth-skinned varieties. Susceptibility varies considerably, but even the most resistant varieties may have significant amounts of disease in some years. 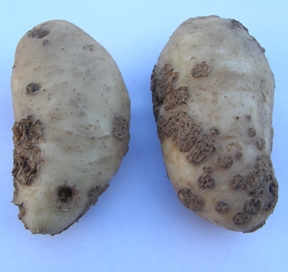 Tubers with scab symptoms. Photo by Steven B. Johnson. 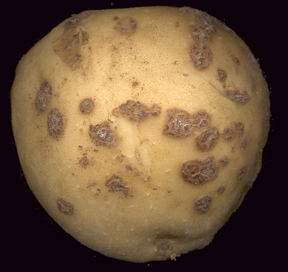 Chemical controls, short of soil fumigation, are not particularly effective. Planting certified seed with no scab lesions is the most effective means of control. Treatment with mancozeb has been suggested for seed with some scab contamination.

Amend the soil to increase the acidity. Use acidifying fertilizers; use gypsum rather than lime.

Varieties with some resistance to scab include Nooksack, Russet Burbank, Superior, and Dark Red Norland. Several of the fingerling type varieties also have some resistance. Yukon Gold, Kennebec, Katahdin, Norwis, Shepody, Russet Norkotah, and Defender are some of the more scab-susceptible lines.