Potato wart or potato canker is a disease caused by the soil-borne chytrid fungus Synchytrium endobioticum. It is a serious disease that affects cultivated potatoes, tomatoes, and a number of wild Solanum species. Potato wart was once the most serious disease of potato before the spread of the pathogen and subsequent disease was controlled by quarantines. The wart problem is compounded by the fact that the fungus has developed numerous strains, known as pathotypes. About 20 pathotypes occur around the world, including four known in Newfoundland. Potatoes that are resistant to one pathotype may be susceptible to another. Although resistant potato plants do yield disease-free crops of tubers, the problem of contaminated soil remains. The disease still poses a serious threat to potato production because the spores of the fungus can remain viable in the soil for many years.

Potato wart was first described in Hungary in 1896 and was subsequently discovered in most European countries except Portugal, where it was eradicated. There is speculation that the potato wart-infected tubers were inadvertently introduced to Europe with breeding material after the 1840-50 potato blight disaster. Early in the 1900s, the disease was reported in Newfoundland. Potato wart has also been reported in Algeria, Bolivia, Bhutan, Chile, China, Falkland Islands, India, Lebanon, Mexico, Nepal, Peru, South Africa, Tunisia, Uruguay and New Zealand’s South Island. Wart was reported in some eastern states of the US, where it was contained and subsequently eradicated.

Synchytrium endobioticum does not produce hyphae, but sporangia containing anywhere from 200–300 motile zoospores are produced. Overwintering sporangia reside in warts. With moisture and temperatures above 45°F, hundreds of swimming zoospores are released into the soil. The zoospores possess a single flagellum that enables them to move in soil water to reach the host. The swimming spore, which is about 1/50 the size of the resting spore, eventually reaches susceptible potato tissue. Once a suitable host cell is encountered, the zoospore will shed its tail and penetrate the cell, thus perpetuating the disease cycle. The penetrated host cell swells as the fungus develops and forms summer sporangia. The summer sporangium is short lived but produces and releases zoospores, which can infect other cells. The infection and release cycle may be repeated as long as conditions are suitable. Host cells adjacent to the infected cells also enlarge and proliferate, leading to the cauliflower-like appearance. Under certain conditions, the zoospores may fuse in pairs to form zygotes. A thick-walled structure called the winter sporangium is formed. These mature winter sporangia are resting spores and are released into the soil from rotting warts. Potato wart resting spores can remain viable for more than 40 years. The presence of abundant soil water is key to the development of the disease. While potato variety plays a role, the severity of the disease is related to the soil temperature and moisture during tuber development, with cool, moist conditions being favorable for disease development.

The disease appears in new areas when the fungus is transported there. The main means of spread is by infected seed tubers that may have incipient warts or infested soil attached to tubers. It can also be spread by movement of contaminated materials including the soil itself, implements used in potato cultivation, footwear worn when working potato plots, hooves of animals tethered on infested soil, or by wind passing over dried infested soil. The sporangia can survive digestion by animals, and therefore can be spread by manure from animals fed on diseased potatoes.

Potato wart appears on all underground parts of the potato except the roots. Buds on stems, stolons, and tubers are the centers of infection and abnormal growth activity leading to wart formation. A typical wart is roughly spherical, and white when underground but black when decaying. It is usually not a solid structure. A wart may be as small as a pin and easily overlooked, or as large as a fist. Warts can range from small protuberances to large, intricately branched systems. They are soft and pulpy and can be cut more easily than a tuber. Morphologically, a wart consists of distorted, proliferated branches and leaves grown together into a mass of tissue resembling the head of cauliflower. A developing wart may become exposed at or above the soil line where it turns green. As the warts become older, whether above or below ground, they darken and decay. It is not uncommon for the entire tuber to be replaced by the warty proliferation. Warts that develop on potatoes in storage may be the same color as the tuber. 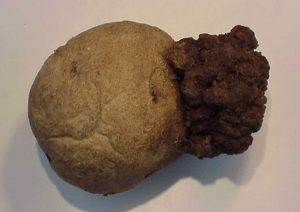 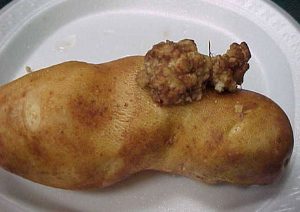 Above-ground symptoms are not usually apparent, although there may be a reduction in plant vigor. In a severe infestation, the tip of the stolon becomes infected and develops a gall instead of a tuber. More than one wart can occur on an individual tuber. In severe cases, the entire tuber is affected. When infected early, tubers can become so distorted and spongy that they are almost unrecognizable. Warts on stolons are similar in appearance to those on tubers. The yield of saleable potatoes from a severely affected crop can be less than the actual weight of seed potatoes planted.