Potato leak is caused by several species of the soil-borne fungus-like organism, or oomycete, Pythium, with P. ultimum being the primary pathogen. This pathogen has a wide host range, attacking many crops and weeds. It is widely distributed in soils and water and it survives on debris.

The disease is observed in storage shortly after harvest. Tuber wounds sustained during harvest and handling provide infection sites for the pathogen. Hot temperatures and wet soil conditions during harvest favor the pathogen. Affected tubers exhibit extremely wet breakdown in which clear fluid literally leaks out of the tuber, hence the name.

Recently, in parts of the US, potato leak has been found in the field before harvest where the pathogen has entered through the lenticels. This has not been seen in Maine.

Pythium produces sexual structures called oospores as a survival mechanism between host crops. These thick-walled spores can remain dormant, but viable, in the soil for many years. The disease begins when Pythium enters tubers through wounds, most typically during harvest, but wounds made during planting or post-harvest handling operations can also provide entry for the pathogen. The disease is halted below 50ºF, and the pathogen grows rapidly when temperatures are above 77ºF. When tuber pulp temperatures are greater than 65°F, potato leak symptoms can manifest. With pulp temperatures higher than 65°F, symptoms can become even more pronounced. Infected potato tubers can exhibit leak in as few as 36 hours under these high pulp temperatures. Pythium doesn’t transfer from tuber to tuber well in storage, but bacteria and other secondary rotting organisms can follow the pathogen and cause extensive losses.

Potato leak is most problematic in wet areas of a field, particularly when tuber pulp temperatures are high at harvest.

Potato leak has brown, water-soaked lesions around wounds on the tuber. The disease progresses quickly, with dark brown to light black watery rotted areas appearing inside the tuber. In the early stages, a distinct boundary between healthy and diseased tissue may be evident. Advanced symptoms include a hollowed-out shell. The slightest pressure on the tuber causes clear to slightly brownish liquid to leak out. 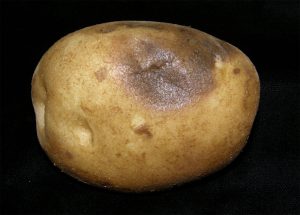 Tuber with external leak symptoms. Photo by Steven B. Johnson 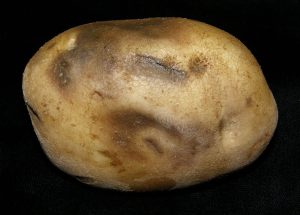 Tuber with leak symptoms at damaged area. Photo by Steven B. Johnson 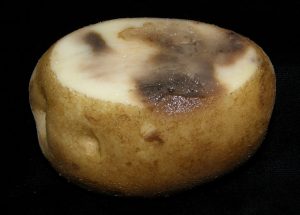 Tuber with internal leak symptons. Photo by Steven B. Johnson

Potato leak can cause significant losses. In Maine, most potato-leak-related losses occur in storage, but losses in transport can occur if the potatoes are shipped soon after harvest.

Crop rotation, while always a good idea, will reduce, but not eliminate, the potato leak pathogen.

All photos by the author, Steven B. Johnson.