Black dot of potato is caused by the fungus Colletotrichum coccodes. While considered to be a weak potato pathogen, it has a wide host range, occurring on other members of the Solanaceae family, as well as some plants outside the nightshade family. Black dot is a common, but minor, disease in potatoes, often occurring in combination with other foliar or tuber diseases. The pathogen can infect the tubers, stolons, roots, and stems of the potato. Black dot is becoming an increasingly important issue in washed tablestock potatoes. While most often seen on tubers, it can affect above-ground and below-ground parts of the potato plant.

Colletotrichum coccodes survives between growing seasons as sclerotia — hard, dark, dormant bodies formed by the fungus. Sclerotia are about 1/50 of an inch in diameter and are formed in infected plant debris and soil, on infected potato tubers, and in overwintering debris of susceptible solanaceous crops and weeds. Sclerotia develop into acervuli, which are asexual fruiting bodies. When infected plant debris is between 45°F and 95°F, acervuli give rise to spores that can cause new infections. Spores can be carried by air currents. In the presence of free moisture, spores landing on susceptible plant tissue may germinate and penetrate tissue directly through the epidermis or through wounds such as those caused by insect feeding or mechanical injury. Infections generally occur at temperatures above 68°F.

Soil-borne inocula serve as a major source of pathogen. Contaminated seed tubers bring the pathogen into a field, and continual cropping of potatoes in the field increases the pathogen population. Infections from seed- or soil-borne inocula may occur early in the season, but the characteristic ‘black dot’ sclerotia symptoms on stems rarely appear until the end of the growing season, often after senescence or plant stress.

Above-ground symptoms are not common in Maine. The wilt associated with black dot is indistinguishable from other wilts. Severe rotting of roots, shoots, and stolons can occur.

Tuber symptoms appear as a brown to gray discoloration on the tuber periderm. Often, a short length of the infected stolon will still be attached to the tuber. The infection tends to initiate from the stolon or stolon attachment area of the tuber and grow across the tuber surface. Sclerotia are formed in the tuber blemish, giving it a “black dot” appearance. Tuber symptoms are not generally present at harvest but develop in storage, usually within the first two months of storage.

Thinner-skinned potato varieties are more susceptible to tuber blemish symptoms than are thicker-skinned varieties. Lengthening the period between vine kill and harvest increases the opportunity for C. coccodes infection. 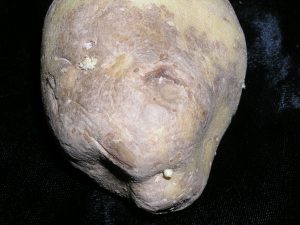 Black dot growing from the stem end of the tuber. Photo by Steven B. Johnson 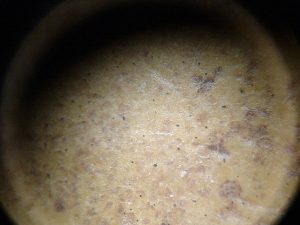 Black microsclerotia on tuber surface. Photo by Steven B. Johnson 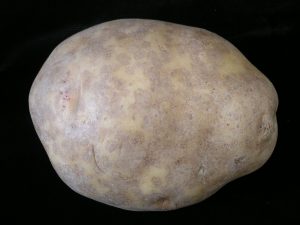 Black dot on tuber surface. Photo by Steven B. Johnson

Most of the control strategies involve reduction of soil-borne inocula. Rotations of more than three years with nonhosts will appreciably reduce the levels of soil-borne inocula. Purchasing and planting clean seed from a well-rotated field with minimal black dot symptoms will limit the introduction of the pathogen into fields. Limiting the time between vine kill and harvest will limit exposure to the pathogen at a vulnerable time. Managing the potato storage to limit condensation on the tuber surface will slow the spread and progress of the pathogen. Presently, there are no commercial potato varieties with resistance to black dot.

All photos by the author, Steven B. Johnson