Dickeya dianthicola and Pectobacterium parmentieri are two of several species of bacteria that cause blackleg disease of potato. Blackleg disease can cause significant economic losses for potato growers.

Dickeya, first reported as a potato pathogen in the Netherlands in the early 1970s, was later reported in Denmark, Finland, France, Hungary, Poland, Slovenia, Spain, and Switzerland. Dickeya spp. (formerly Pectobacterium chrysanthemi, Erwinia chrysanthemi) has emerged as an aggressive potato pathogen worldwide. These bacteria cause wilts and soft rots of many plants, and are responsible for wilting and tuber rot of potato. All potato varieties are susceptible to these pathogens, with some varieties expressing more dramatic symptoms. 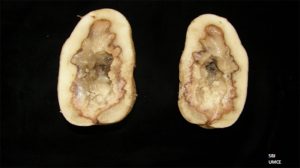 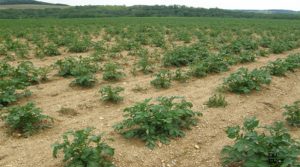 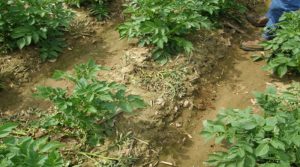 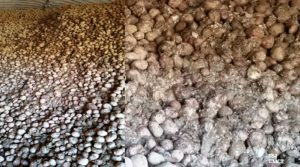 Dickeya dianthicola was first identified in Maine during 2014 and has been confirmed in Maine potato seed since then. It is likely that the pathogen was present before 2014, but probably not for as long as it has been present in Europe. The Dickeya situation in Maine follows that of Europe, with field losses confirmed as Dickeya dianthicola continuing to occur.

As seed-transmitted pathogens, Dickeya dianthicola and Pectobacterium parmentieri can increase during multiplication of seed stocks, particularly where no effort has been made to purge the diseased seed stock. The pathogens can be latent in plant material and may be multiplied while escaping notice. Dickeya dianthicola epidemics are particularly troubling, as they can initiate from very low inoculum levels and spread quickly and aggressively.

Both Dickeya dianthicola and Pectobacterium parmentierican cause typical blackleg symptoms of dark brown to black stem decay. Disease development is rapid, often affecting the entire plant and resulting in death. Dickeya dianthicola has a tendency to rot from the inside, often showing internal necrosis. Pectobacterium parmentieri, on the other hand, has a tendency to rot the cortical tissue on the outside of stems.

Dense canopies, warm conditions, and long periods of leaf wetness or irrigation favor the development of blackleg. In dry growing conditions, stem rot may not be readily expressed despite the presence of the pathogens.

Both Dickeya spp. and Pectobacterium spp. can reduce emergence and adversely affect plant health and plant stand. Seed-piece breakdown and nonemergence is a field symptom of Dickeya dianthicola. In cases of delayed emergence, some affected plants can be stunted. Wilting and rapid death can occur shortly after emergence. Under severe Dickeya dianthicola infection, stand losses can be severe.

Infected seed pieces can break down in the field and not emerge, or they can emerge and produce weak, unthrifty plants with wilting foliage. Often, the infected foliage is lighter in color than healthy foliage.

Both pathogens produce pectinolytic enzymes, which are the major cause of rotting potato tubers. Dickeya dianthicola produces creamy, tan to yellow tuber rot that can be granular. The foul odor associated with tuber breakdowns is owing to secondary invaders. Pectobacterium parmentieri has caused storage loss in Maine. 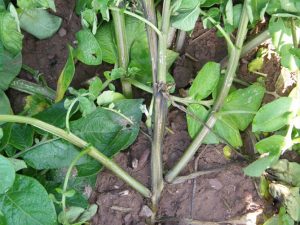 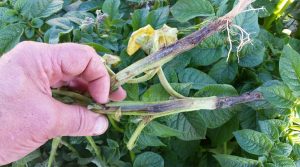 Potato seed tubers harboring Dickeya dianthicola or Pectobacterium parmentieri are a confirmed source of these pathogens. At this point, there is no evidence that either of the pathogens overwinter in the soil in Maine. The reported length of survival time in the soil without a host is from 1 week to 6 months, depending on climate. Longer survival is possible on an unharvested infected tuber. The bacteria can survive in surface water or on the roots of some weeds.

Potato tuber lenticels open under wet soil conditions, thereby providing enhanced infection courts. The spread of these pathogens appears to occur below-ground rather than above-ground. Saturated soil conditions, irrigation, and soil water movement spread these bacteria. Warm conditions favor the development of Dickeya dianthicola and Pectobacterium parmentieri. Dickeya dianthicola can cause potatoes to wilt at any point in the growing season.

Potatoes rotted by Dickeya dianthicola and Pectobacterium parmentieri contaminate harvesting and handling equipment. The infested equipment can transfer the pathogens to a previously uncontaminated lot.

Integrating a disease management strategy throughout the entire potato planting, growing, and harvesting cycle is the key to mitigating losses from Dickeya dianthicola and Pectobacterium parmentieri:

Tubers harboring Dickeya or Pectobacterium may show no evidence of disease going into storage, and may not decay in storage. However, bacteria on asymptomatic tubers may survive and are likely to cause and spread disease the next year if such tubers are planted.

The University of Maine is an EEO/AA employer, and does not discriminate on the grounds of race, color, religion, sex, sexual orientation, transgender status, gender expression, national origin, citizenship status, age, disability, genetic information or veteran’s status in employment, education, and all other programs and activities. The following person has been designated to handle inquiries regarding non-discrimination policies: Director of Equal Opportunity, 101 North Stevens Hall, University of Maine, Orono, ME 04469-5754, 207.581.1226, TTY 711 (Maine Relay System).