Fiddleheads from ostrich ferns are an iconic spring edible in Maine. Native Americans were the first to eat them, and their popularity continues to this day. Fiddleheads are so named because of the similarity in shape to the curled scroll of a violin. Fiddleheads are also known as crosiers or croziers, after the crook-shaped pastoral staff of a bishop. In the Passamaquoddy and Maliseet languages, the word for fiddlehead is “mahsus”; in Penobscot, they are “máhsosi.”

Fiddleheads are important to Maine’s economy, with pickers, retailers, and woodland owners earning extra income from them each spring. Fiddleheads are also an important part of Maine’s culture and heritage. The double-curve motif that Wabanaki people sometimes use to decorate artwork bears a strong resemblance to a fiddlehead. Generations of Maine people have made fiddlehead harvesting a rite of spring. It’s important to know which fern fiddlehead to pick and how much to pick so that this valuable resource can be enjoyed for generations to come.

Ostrich ferns are a perennial that grows in a clump called a crown. Ostrich ferns can produce two kinds of fronds:

The ferns that emerge from fiddleheads in the spring die back to the ground each fall. Fertile fronds, which are not present on all crowns, emerge green, turn brown as the season progresses, and can remain standing for a year after emerging.

Fiddleheads can be established by spores, but grow more quickly from underground stems called rhizomes. In a favorable site, ostrich ferns can spread to cover acres of ground. Ostrich ferns grow primarily along stream and river floodplains in part shade, under the canopy of trees such as red and silver maples and brown ash.

It is important to properly identify ostrich ferns. Bracken ferns, for example, have been shown to cause cancer in rats under laboratory conditions1 and can cause other problems in livestock. Not enough is known about other ferns to recommend eating them.

There are three ways to identify ostrich fern fiddleheads in the spring:

In contrast, bracken fern fiddleheads are fuzzy, lack the brown paper-like covering and do not have a U-shaped groove on the inside of the stem.

Later in the season, fully grown ostrich ferns have other identifying features. With the help of a field guide, you can then identify ostrich ferns for a future harvest. 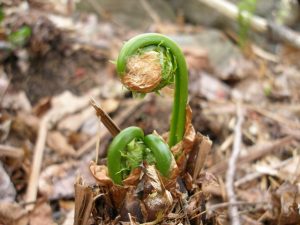 Look for a deep, “U”-shaped groove on the inside of the fiddlehead stem, as well as brown, papery scales covering newly emerging fiddleheads. Photo by David Fuller. (Click on the image to enlarge.) 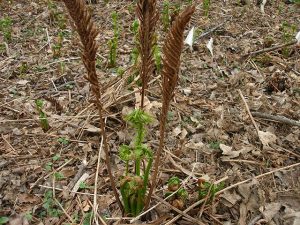 The previous year’s dark brown, spore-bearing fronds will have a distinctive shape resembling a feather and a groove on the inside of each stem. Photo by David Fuller. (Click on the image to enlarge.)

Fiddleheads emerge in the spring, starting in late April in southern Maine, and appearing in mid to late May in far northern Maine. They grow rapidly, up to several inches a day under optimum conditions, so the season in a given location is quite short.

Fiddleheads are harvested in the spring as they emerge from the fern crown. They are best harvested at about two to six inches tall when a portion of the tasty stem can be harvested, but while the fiddlehead is still tightly curled.

Fiddleheads should only be harvested from healthy crowns that can sustain picking. Such crowns will have at least four fiddleheads, rather than one or two. The presence of only one or two fiddleheads in a crown indicates low fern vigor or a newly established fern.

Research conducted by the University of Maine suggests that picking all of the emerged fiddleheads on a crown every year over a series of years results in the decline and often death of the fern.

Picking no more than one-half of the emerged fiddleheads from each crown, with no follow-up harvest of later-emerging fiddleheads in the same season, appears to be sustainable.

When picking fiddleheads, make sure to harvest them into clean containers. Use potable water when cleaning the fiddleheads, not water from streams or rivers. Refrigerate your harvest as soon as possible to maintain freshness. For more information on cooking fiddleheads, please refer to UMaine Extension’s fact sheet, Bulletin #4198, Facts on Fiddleheads.

Fresh fiddleheads can be marketed in many ways, including farmers markets, restaurants, roadside stands, supermarkets, and shipping by mail. Better prices can be charged for fiddleheads that have been cleaned to remove their papery coverings. Consider including cooking directions when marketing directly to the consumer.

The Centers for Disease Control (CDC) has investigated a number of outbreaks of food-borne illness associated with fiddleheads. The implicated ferns were eaten either raw or lightly cooked (sautéed, parboiled, or microwaved), which was what caused a food-borne illness outbreak in British Columbia in 1990. Although a toxin has not been identified in the fiddleheads of the ostrich fern, the findings of this investigation suggest that you should cook fiddleheads thoroughly before eating (boil them for at least 15 minutes).