What are European fire ants?

European fire ants (also known as European red ants, Myrmica rubra) are very small red ants. The workers are about 3/16 inch long (as long as this line: __ ) and the queens are a little larger. These ants are only distantly related to the “true” fire ants (Solenopsis species) found in the southern U.S. and Latin America. 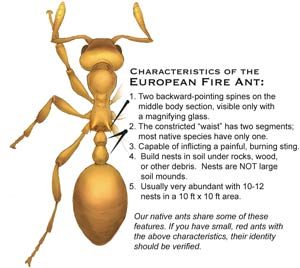 Characteristics of the European Fire Ant
(Full descriptive copy from this graphic, below)

Adult ants tending larvae and pupae in a nest.

Why are they a problem?

European fire ants are a nuisance pest for people and a potential threat to the environment. They aggressively defend their territory and readily sting humans, pets and livestock that have the misfortune to move slowly or rest within the ants’ large foraging areas.

The severity of the reaction to the European fire ant sting varies from one individual to another, and with the location of the sting. Usually, a sting results in an inflamed red area from one to four inches in diameter, sometimes with a raised white area in the center. The sting causes an initial burning sensation and the affected area can remain sore for just a few hours, or a day or more.

Where this insect has established nests, homeowners have reported that they are unable to use their yards and gardens because of repeated stings by the ants.

If European fire ants move into new places, they may threaten native species of ants. In Europe, it is believed that competition with other native ants prevents the European fire ant from becoming a serious problem. But North America’s native ants did not co-evolve with this insect, and may not be able to defend their food and nesting resources against it. European fire ants could displace them if allowed to spread uncontrolled. Many other insects become displaced also.

Where are European fire ants in Maine?

The European fire ant has become established in many communities along the Maine coast. Populations have been confirmed in Cumberland, Hancock, Kennebec, Knox, Waldo, Washington, and York counties.

The date of the ant’s arrival is not certain. We have confirmed that European fire ants were established in two locations in Maine before the 1950s. Population densities and the number of infestation sites have increased considerably over the past decade. As of 2002, their presence was confirmed in more than 20 locations along Maine’s coast.

Since this ant is native to cold regions of Europe and Asia, it is unlikely that climate alone would prevent its spread into other areas of the state.

Where do European fire ants live?

European fire ants live in decaying logs or soil, under rocks and human debris, and even in thick clumps of grass or under leaves.

Their nests vary in size, from a few hundred to ten thousand workers. Nests usually have multiple queens that lay eggs.

The habitats in which these ants are found varies in different parts of their native range, from conifer forests in Russia to pasture edges in England.

However, in Maine, this ant appears to take advantage of multiple habitats, including lawns, old fields, scrub/shrub, and deciduous forests. The ants do not nest in houses and do not make large mounds.

How do European fire ants move to new places?

European fire ants move in two ways. First, people move ants from one location to another, sometimes across long distances. Since European fire ants develop their colonies in soil and similar materials, they can be moved in potted plants and mulch from nurseries, and in soil moved to or from building sites. And, since egg-laying queens move with the individuals forming new colonies, the new nests have all the components to establish a viable population in their new site.

At least one colony of European fire ants was moved from a coastal Maine nursery to a landscape located 20 miles inland, and that colony has persisted through several winters. It is likely that infested containerized plants brought from Europe to plant in gardens of coastal Maine estates are responsible for some of the original infestations in the early half of the 20th century.

Second, in a process called “colony budding,” a group of ants takes a queen and moves away from their original colony to establish a new nest in a nearby site. In this way, infestations spread outward over time.

Mating flights and colony founding by new winged queens, common in other ant species, does not appear to be a frequent mechanism of spread for these ants in their invasive range.

How can European fire ants be managed? Many homeowners, business owners, and public land managers currently rely on insecticides to curb this pest. Since populations seem to resurge after such treatment, this strategy appears to provide only short-term control. We are currently researching the efficacy of a number of “least toxic” strategies for these ants, including insect growth regulators, boric acid baits, and biological controls. See Bulletin #2551, European Fire Ant: Management for Homeowners for more information.

What should I do if I suspect I have European fire ants in my yard?

To send an ant for identification, wrap it in a tissue and place in a small vial with a tight lid. Include the information below and send it to Dr. Eleanor Groden, The University of Maine, 5722 Deering Hall, Room 306, Orono, ME 04469-5722.

This publication was made possible by:

Characteristics of the European Fire Ant:

Our native ants share some of these features. If you have small, red ants with the above characteristics, their identity should be verified.