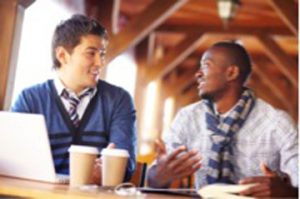 Since 1990 Maine, like most areas of the United States, has seen an increase in primary and secondary refugees locating in our communities. According to Welcoming America, this decade’s number of immigrants to the U.S. is unmatched since the early 1900’s. Catholic Charities Maine reports that every year more than 250 primary refugees, 200 asylum seekers, and other immigrant groups arrive in Maine from war torn counties. Immigrants arrive with aspirations to be self sufficient and active members of the community; however, many factors including cultural differences contribute to a climate that is ripe for misunderstanding. This white paper presents findings from a 2013-2014 research project exploring how to strengthen a community’s capacity for cross-cultural conversations with newly-arrived refugees in Portland, Maine.

Annually, Maine accounts for less than half of one percent of the U.S.’s 70,000 incoming refugees (U.S. Department of State, Bureau of Population, Refugees, and Migration, 2014). Every year approximately 200-350 primary refugees and 50 or so secondary refugees[1] enter Maine, a state that, according to a 2012 U.S. Census estimate, is 95% white English speakers with only 3% of the population foreign born. Primary refugees arrive in Maine directly from a country of asylum and are considered “newly arrived” for up to one year after their arrival in Maine. A secondary migrant is a person who entered the United States as a refugee, was settled in one state, and then chose to relocate to another state. Recently, increasing numbers of New Mainers are arriving from Iraq, Afghanistan, Somalia, and Sudan. Refugees in Maine and across the nation are often locating in towns and cities without a recent history of refugee immigration.

When refugees enter the U.S. they embark on a 90 day resettlement process that assists refugees in becoming self-sufficient community members. Resettlement is a partnership between the refugee, the community, Office of the United Nations High Commissioner for Refugees, and the voluntary resettlement agencies.

UMaine IRB approved the research, Refugee Perspectives: Using Refugees’ Voices to Improve Programs, that utilized Participatory Development methods to understand (1) what the refugees’ histories with feedback were in their countries of origin and are now in the U.S., (2) how they would like to be asked their opinions, and (3) their recommendations for future improvements in the resettlement program with an eye toward strengthening a community’s capacity for cross-cultural conversations.

The study used focus groups to collect data; the investigators collaborated with refugees regarding focus group construct, question formation, recruitment, and participation benefits. Collaboration with refugees before the focus groups heightened investigator awareness that routine meeting methodologies and processes, to include feedback, were rooted in western concepts and constructs. The research became a microcosm of a larger question of how we, native English speakers and American-born citizens, could provide an environment for New Mainers to feel comfortable in sharing their opinions and ideas and, concurrently, provide a platform for us to receive relevant information as we provide programs for New Mainers.

Using a process similar to “regular” focus groups, the refugee project advisors and participants helped us understand refugees’ reticence when sharing opinions or ideas, i.e., providing feedback. Refugees shared experiences from their countries of origin where sometimes severe punishment was the consequence of open and honest sharing of ideas. This frame of reference helped us understand the differences between U.S. concepts of safety, anonymity, confidentiality, and right versus wrong answers.

Newly arrived refugees were invited to participate in the research study because we acknowledged that they are the experts on what it is like to be a refugee. In addition to asking for ideas to shape future refugee programs, we also wanted to understand how refugees think Maine organizations and institutions can use their opinions.

Participants were required to have been in the United States for at least 90 days and to have completed resettlement, to be able to reflect on that experience. They were recruited by RIS using flyers translated by refugees to Arabic and Somali and by refugee-to-refugee word of mouth.

Four focus groups were held between December 2013 and April 2014. Thirty-four people participated from six different countries: three East African1 and three Middle Eastern2. Twenty-one of the 34 were from Iraq. Three-quarters of participants had been in Maine a year or less; 62% had been here for less than six months.

Each 90-minute focus group, with four to 16 participants, responded to seven questions. To assure anonymity, only first names were used. Rather than audio- or videotaping, responses were written in English on flip charts for all to see. Permission was received for one investigator to simultaneously record responses on a laptop. Arabic, Somali, and Persian interpreters were used. To model Participatory Development and promote safety, each session was hosted at CCMaine to provide a familiar location.

Research consent forms, available in Arabic, Somali, and English, did not need to be signed. Session guidelines stressed confidentiality, that different opinions were okay, and that there were no right or wrong answers.

There was no common understanding of the word “feedback” among the participants. Sharing opinions and comments was not allowed, “did not exist” or was punishable (except if it was positive) in their countries of origin. New Mainers are seeking security, hoping to reverse this deep-seated lack of trust that they had experienced. When asked, “How can organizations in the U.S. help refugees feel safe to share their ideas and opinions about the organization?” they replied, “Welcome us.” “Trust us; we want to trust you.” “We need to be secure.” “We need a safe place to live and have education for our children and learn how to speak English so we can work. We need to be in relationship with you.”

A common perception shared by newly arrived refugees is that being ignored, not listened to, or being told what to do and how to do it is being perpetuated in this country. “People ask (about my needs or experiences), but don’t listen.” This experience, reminiscent of their pasts, then leads to a fear and a lack of trust, especially when people feel that speaking their truth will compromise their security. One participant gave the example that if one of their requirements is a safe haven, a place to live, and they are moved to substandard housing and speak of bedbugs or other pests, and are ignored or told that it is all there is for them, they may feel they will be deported if they complain further.

No audio or video record of the focus groups exists to illustrate the climate in the room. The researchers observed typical group dynamics where the sessions were reserved at the beginning with more lively conversation as the questions deepened. One difference was that the lively, full-group, multi-minute discussions were in Arabic. These animated, non-English conversations, when summarized by interpreters and other participants, were focused on basic human rights and their futures.

In conclusion, we hope these findings, supported by other scholarly work, serve as a catalyst for strengthened cross-cultural conversations. Here are some simple practices that will begin to “make a difference” and engage New Americans in ways that are refugee-community-friendly:

Is This Just Ink on Paper?

Newly arrived refugees were asked to trust and share their opinions and ideas with researchers about a system that can intimately affect their immediate and long-term futures and that of future refugees. This research brought to light the debated question in Participatory Development — Can quality of life be improved when one entity (institutions/agencies) has greater power than the other (refugees)?

The people in each focus group voiced the question of whether this research will impact their future and said it more simply and with compelling passion, “Will this make any difference … or is it just ink on paper?”

Many Americans may forget that freedom of speech is a basic human right and take for granted the ability to share our opinions. Many refugees, by definition, have not had those same experiences.

This project demonstrated that refugees see ‘feedback’ as a basic human right regarding freedom of expression. Many refugees stated they left their homes because they were silenced. By believing and trusting that refugees are the experts on their condition and needs, organizations can improve their effectiveness.

The authors were humbled by the frank expression of experiences, opinions, and ideas shared and often animatedly discussed by newly-arrived refugees during this study. Four official and many unofficial interpreters helped us hear these 34 New Mainers’ voices.