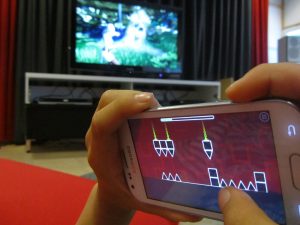 Many Maine parents, providers, and educators are concerned about the amount of television and the type of programming to which children are being exposed. Young children under the age of two spend, on average, two hours every day watching TV or other screen media. The American Academy of Pediatrics advises that children under age two watch no television. Studies show that too much television viewing can have negative affects: children may have attention difficulties, they may have delays in language and develop smaller vocabularies, they may have more violent and aggressive play and behavior, and they are more likely to be obese.

The Parents as Teachers National Center says that young children need to “explore, move, manipulate, smell, touch and repeat as they learn.” Research tells us that watching television or sitting in front of a screen does not increase attention, promote social skills, or foster creative play. Children should engage in the activities they need to help them develop their bodies and brains instead of watching television.

Children over the age of eight spend on average more than seven hours a day consuming entertainment media. This can include DVDs, the Internet, and video games, using the phone, texting, or doing combinations of these and multitasking! It is important for children to play, read, do homework without distraction, and have in person conversations with other children and adults. These experiences are important for healthy social, brain, and emotional development,. Children who watch too much TV or are absorbed by screen time have less time for interactions and for free play, which are both important for healthy development.

Language skills are best developed through reading and interactions with others in conversation and play. Think of it like a tennis match, where one person serves the ball, and the other returns it. Children learn language when adults or others interact with them, returning their expressions and responding to noises and questions. Excessive television watching can impede this development. The television and computer do not talk back in a genuine way.

Childhood obesity is a national problem, and results from the Youth Risk Behavior Survey show that over 10% of Maine’s youth are obese. Among young children under 5, those rates may be closer to 40%. Inactivity plays a huge role in weight gain, and television watching consumes only a few more calories than sleeping. Even active video games where children stand and move do burn some calories, but not as many as playing the actual games like tennis or bowling. Although interactive video games burn minimal calories, parents should encourage playing the actual games, like going outside to play tennis or run. In order to burn calories with video games, you have to play as if you were really playing the real thing, and you have to try very hard. For example, playing tennis burns 8.1 calories per minute. Playing a video tennis game like Wii burns about 5/3 calories per minute.

Children who watch more television don’t get as much physical activity and don’t have time to explore new activities in the same way as children who spend less time in front of a screen.

Eating too much junk food and watching too much television are two major causes for obesity. And when children sit in front of the TV, they are more likely to snack and also to see advertisements for food products.

According to J. Van Evra, author of Television and Child Development, young children are particularly vulnerable to the influence of commercial advertising. They do not have the capacity to evaluate it critically, and as a result parents are pressured to buy products such as cereal and toys. Children who watch TV consume more soft drinks and snacks, which are heavily advertised on television.

What Are Children Watching?

Violence in the media, television programming, video games and movies are a growing concern. According to Carla Kalin, M. S., statistics indicate that the typical American child will be exposed to 12,000 violent acts on television a year. The American Psychological Association Help Center reveals that children’s TV programming alone contains about 20 violent acts an hour.

Children are imitators and those who watch violent shows are more likely to display aggressive behavior. They are more likely to “strike out at playmates, argue, and disobey authority” according to the American Psychological Association Help Center. The Parents as Teachers National Center suggests that violent television programming teaches children that violence is an acceptable way to solve problems.

According to the Parents as Teachers National Center, the toddler and preschool years are an important time for emotional development, as well as a time when fears increase, and many children cannot distinguish reality from fantasy. Watching a violent act on TV may be very disturbing to a toddler. The American Psychological Association Help Center suggests that there are three types of harmful effects associated with viewing violence. They are:

The only way to know the impact of television or other programs on your child is to talk with them about what they see. The Parents as Teachers National Center notes that children who watch shows with violent content have more anxiety about the world around them. You can reduce this anxiety by reducing or eliminating exposure to violent programs and games. Some children will have anxiety because of overhearing programs on television, so it’s important to check in with them about where their fears might be coming from.

Is All Television or Media Bad for Kids?

Programs for infants can be harmful, and research suggests that children under 2 who watch programs designed to “teach” or help with “brain development” learn less than children who spend time playing and interacting with other children or adults. This is also true for toddlers, where each additional hour of TV has been found to relate to decreased classroom engagement and a higher body mass index.

Some television watching or screen time with parent discretion is beneficial for school age children. Parent discretion means helping your child make a wise choice about the content of a program. You can use the rating system (see details below), see if it is age appropriate or if it has educational benefit. Some programs for children can be educational and promote prosocial behavior. When parents watch the programs with children and talk about them, helping them to think about what they’ve been watching, the effects of TV are less negative. There are ways to watch TV effectively with your child to support moderate use that can stimulate a child’s education and creativity. Some ideas are:

Being willing to take small risks is an important part of development, especially in social situations. TV can be a distraction from necessary risk taking and can interfere with trying new things or meeting new people and developing social relationships.

What You Can Do

How can you guide your child’s television viewing? The government, in cooperation with the television industry, has implemented a rating system for television programming. This system is to help guide parents and assist them in establishing guidelines for their children’s TV viewing. However, the American Psychological Association Help Center reminds us that television networks rate their own programs, unlike the motion picture association.

In 1996, the Telecommunications Act was passed in an attempt to help parents restrict the viewing habits of their children. A device inside of the television called the “v-chip” can be programmed from a remote control. All new TVs made after 2000 were required by law to have the v-chip, but a 2004 study revealed that only 15% of parents actually use the v-chip. Instructions for using the v-chip are included with your television instruction manual.

Even with the rating system and the v-chip in place, parents still need to take an active interest in what their children are watching on television. The American Academy of Pediatrics started the Media Matters campaign to inform parents about types of media and kids.

Maine Caregivers: How To Avoid Too Much Screen Time (YouTube video)

Here are some suggestions from the organizations Zero to Three and the American Academy of Pediatrics.

Ten Things Toddlers Can Do Besides Watch TV

Interaction, reading, and play activities are important to a child’s brain development and learning. These types of activities are preferred to passively watching television. They matter in the healthy development of social, emotional, and intellectual skills. Here are some ideas from the Parents as Teachers National Center for activities to do with your child instead of watching TV:

Families and screen time — a summary

For many children, over 30% of their time will be spent in front of a TV and/or computer. Fortunately, most parents pay attention to what children are watching, talk with them about it, and place some limits on screen time. Infants do not need screen time at all, young children should be exposed to as little as possible, and all screen time should be a shared experience with adults, who can talk with children about what they see.

Having family movie nights can be lots of fun when everyone is interested in the movie, and these should be special occasions. These hours in front of the screen add up, and mean that less time has been spent interacting, talking, and playing imaginative games.
The most entertaining experiences are in real conversations, story telling, sharing, and laughter. Spend as much time as you can with these activities, and save the TV for a rainy day.

Family Education Network (2010). Watch TV Along with Your Child. Retrieved from http://life.familyeducation.com/television/toddler/53399.html?detoured=1