Bulletin #4356, Children and Brain Development: What We Know About How Children Learn 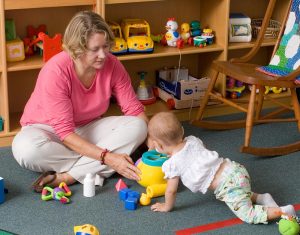 Like constructing a house, brains are built upon a strong foundation. This starts before birth, and is very important during the first three years of life. Brain cells are “raw” materials — much like lumber is a raw material in building a house, and a child’s experiences and interactions help build the structure, put in the wiring, and paint the walls. Heredity (nature) determines the basic number of “neurons” (brain nerve cells) children are born with, and their initial arrangement.

At birth, a baby’s brain contains 100 billion neurons, roughly as many nerve cells as there are stars in the Milky Way, and almost all the neurons the brain will ever have. The brain starts forming prenatally, about three weeks after conception. Before birth, the brain produces trillions more neurons and “synapses” (connections between the brain cells) than it needs. During the first years of life, the brain undergoes a series of extraordinary changes.

In the brain, the neurons are there at birth, as well as some synapses. As the neurons mature, more and more synapses are made. At birth, the number of synapses per neuron is 2,500, but by age two or three, it’s about 15,000 per neuron. The brain eliminates connections that are seldom or never used, which is a normal part of brain development.

“Windows of opportunity” are sensitive periods in children’s lives when specific types of learning take place. For instance, scientists have determined that the neurons for vision begin sending messages back and forth rapidly at 2 to 4 months of age, peaking in intensity at 8 months. It is no coincidence that babies begin to take notice of the world during this period.

Scientists believe that language is acquired most easily during the first ten years of life. During these years, the circuits in children’s brains become wired for how their own language sounds. An infant’s repeated exposure to words clearly helps her brain build the neural connections that will enable her to learn more words later on. Language can be learned a multitude of ways, like casual conversation, songs, rhymes, reading, music, story telling and much more. Early stimulation sets the stage for how children will learn and interact with others throughout life. A child’s experiences, good or bad, influence the wiring of his brain and the connection in his nervous system. Loving interactions with caring adults strongly stimulate a child’s brain, causing synapses to grow and existing connections to get stronger. Connections that are used become permanent. If a child receives little stimulation early on, the synapses will not develop, and the brain will make fewer connections.

Stress can become toxic when a child has frequent or prolonged experiences like abuse, neglect or poverty without adult support. When adults are present to support a child’s experiences and help the child’s stress levels come down, stressors may be tolerable. Examples of tolerable stress include loss of a loved one, illness or injury, or poverty when a caring adult helps the child adapt. Some stresses are also thought of as positive stress, such as when there is a small amount of fear or sadness, or everyday challenges. In experiences of positive stress, the system can return to a calm state in a relatively short period of time. When children are faced with physical or emotional stress or trauma, the hormone cortisol is released when the brain sends a signal from the hypothalamus to the adrenal cortex, which is a gland above the kidney. High levels of cortisol can cause brain cells to die and reduces the connections between the cells in certain areas of the brain, harming the vital brain circuits. In other words, the wiring of the house can be severely damaged or miswired if a child is exposed to repeated and longtime stress with out the assistance of a caring adult. Babies with strong, positive emotional bonds to their caregivers show consistently lower levels of cortisol in their brains.

The Brain in Brief

The brain is part of the central nervous system, and plays a decisive role in controlling many bodily functions, including both voluntary activities (such as walking or speaking) and involuntary ones (such as breathing or blinking).

The brain has two hemispheres, and each hemisphere has four lobes. Each of these lobes has numerous folds. These folds do not all mature at the same time. The chemicals that foster brain development are released in waves; as a result, different areas of the brain evolve in a predictable sequence. The timing of these developmental changes explains, in part, why there are “prime times” for certain kinds of learning and development.

Different parts of the brain control different kinds of functions. Most of the activities that we think of as “brain work,” like thinking, planning or remembering, are handled by the cerebral cortex, the uppermost, ridged portion of the brain. Other parts of the brain also play a role in memory and learning, including the thalamus, hippocampus, amygdala and basal forebrain. The hypothalamus and amygdala, as well as other parts of the brain, are also important in reacting to stress and controlling emotions. The basic building blocks of the brain are specialized nerve cells that make up the central nervous system: neurons. The nerve cells proliferate before birth. In fact, a fetus’ brain produces roughly twice as many neurons as it will eventually need — a safety margin that gives newborns the best possible chance of coming into the world with healthy brains. Most of the excess neurons are shed in utero. At birth, an infant has roughly 100 billion brain cells.

Every neuron has an axon (usually only one). The axon is an “output” fiber that sends impulses to other neurons. Each neuron also has many dendrites — short, hair-like “input” fibers that receive impulses from other neurons. In this way, neurons are perfectly constructed to form connections.

As a child grows, the number of neurons remains relatively stable, but each cell grows, becoming bigger and heavier. The proliferation of dendrites accounts for some of this growth. The dendrites branch out, forming “dendrite trees” that can receive signals from many other neurons.

At birth, the human brain is in a remarkably unfinished state. Most of its 100 billion neurons are not yet connected in networks. Forming and reinforcing these connections are the key tasks of early brain development. Connections among neurons are formed as the growing child experiences the surrounding world and forms attachments to parents, family members and other caregivers.

In the first decade of life, a child’s brain forms trillions of connections or synapses. Axons connect to dendrites, and chemicals called neurotransmitters help send messages (called “impulses”) across the resulting synapses. Each individual neuron may be connected to as many as 15,000 other neurons, forming a network of neural pathways that is immensely complex. This elaborate network is sometimes referred to as the brain’s “wiring” or “circuitry.” As the neurons mature, more and more synapses are made. At birth, the number of synapses per neuron is 2,500, but by age two or three, it’s about 15,000 synapses per neuron. This is like going from 100 to 600 friends on Facebook, and each of those friends in turn, is connected to 600 more people! The neural network expands exponentially. If they are not used repeatedly, or often enough, they are eliminated. In this way, experience plays a crucial role in “wiring” a young child’s brain. Brain development does not stop after early childhood, but it is the foundation upon which the brain continues developing. Early childhood is the time to build either a strong and supportive, or fragile and unreliable foundation. These early years are very important in the development that continues in childhood, adolescence, and adulthood.

Research on early brain development and school readiness suggests the following guidelines for the care of young children:

Gopnic, A., Meltzoff, A., Kuhl, P. (1999). The Scientist in the Crib: What Early Learning Tells Us About the Mind, New York, NY: HarperCollins Publishers.