Witches’ broom of blueberries is a fungal disease that is considered to be a minor problem in highbush and lowbush blueberries in most regions but is quite prevalent in Maine. Blueberry plantings can become heavily infected when they are in close proximity to balsam fir (Abies balsamea), which is the alternate host of this fungus. Having fir trees close by to act as an alternate host is necessary for the fungus to complete its life cycle. Christmas tree growers are therefore strongly discouraged from raising blueberries on the same property to avoid encouraging this disease.

The witches’ broom fungus, Pucciniastrum goeppertianum produces three fungal fruiting structures that produce different spores, depending on which host it is infecting. Spermagonia and aecia fruiting structures are found on firs, and telia are formed on blueberries and some other Vaccinium spp. In the spring and early summer, aeciospores are produced on balsam fir needles and are carried by wind to susceptible blueberry plants. The fungus then infects blueberry plants systemically. Although infected with the disease, plants do not show symptoms in the first year of infection. The following year, symptoms may easily be seen in the late summer and fall.  Telia develop in the fall to overwinter on the swollen shoots of the infected blueberry plants. The next spring, the telispores germinate and produce basidopsores that are carried by wind from the blueberry plants to balsam fir trees, where they infect the current year’s needles.

Highbush blueberries (V. corymbosum) are most susceptible; lowbush blueberry (V. angustifolium), and other Vaccinium spp., including:

Infected blueberry plants have broom-like masses of swollen, spongy shoots with shortened internodes and leaves that are smaller than normal. Symptomatic shoots have a reddish yellow color and turn brown and shiny throughout the growing season. As the season progresses, the brooms become dried out and cracked. They will appear dead the following spring.

Balsam fir trees that are infected can experience stunted growth with yellowish-green colored needles. When the spores develop, they appear as small round orange-yellow blisters, occurring mostly on the undersides of the needles. 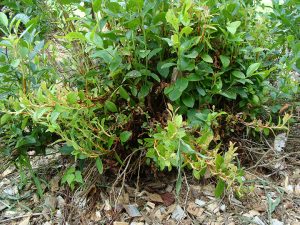 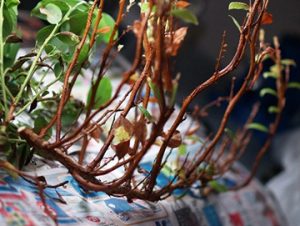 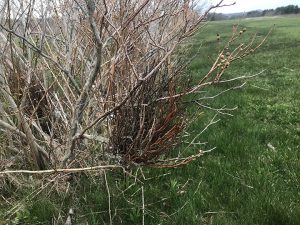 At this time, there are no effective fungicides for managing witches’ broom.