GroupWorks: Getting things done in groups 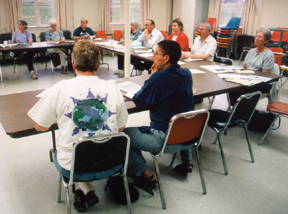 What you will learn:

When was the last time you felt good helping your group decide something meaningful? Was it a simple vote, or was there good discussion beforehand? Did people understand what was being decided? Did you look at more than one possible way to solve the problem or move ahead with an opportunity? Did everyone have a chance to talk? Did you talk about the obvious issues as well as those that are sometimes “undiscussable” in your group? Was there a sense of celebration when you finally made the decision?

Did you know that the word debate comes from the French “to beat”? Even “discussion” comes from a root word meaning “to break things up.” In contrast, the word dialogue has a meaning more like “. . . a free flow of meaning among all participants.”1

Box 1 illustrates some of the differences between debate and dialogue.

Groups that aim for dialogue in making decisions believe they have heard more than facts. They have a greater understanding about the meaning of the facts, experiences and feelings shared in the process of making a decision.

Can we draw it?

Groups who make decisions on a regular basis are able to draw the process they use. A flow chart of how decisions are made is useful as a reminder to new as well as experienced members of your group. Some decisions may come in simple votes, and some are made after being studied by a committee that makes recommendations. With fairly complex issues, your group may want to consider the process outlined below, which is summarized in Chart 1.

Can we frame it?

Groups often begin by clarifying the problem or opportunity around which decisions need to be made. Framing the issue is often the first step in the process. If all members of a group come to understand the issue in the same way, there is a better chance that a common vision of a solution or course of action will emerge.

How will we decide?

Eventually, a group will make a decision. Often they’ll choose by voting, in which some will “win” and others may “lose.” But if the decision is truly important, the group may want to use “community consensus.” (See Box 2) It is important to say which form of decision-making your group will use early on in the process so that people know something about how much time and energy the process will take. Deciding how to decide is an important step in the process.

Can we picture success?

Given the newly framed issue, you might acknowledge the group’s history core beliefs. (What are we proudest about? What do we want to carry forward in this decision?) These beliefs or values might suggest what the group would see as a picture of success in resolving the present issue. Listing some of the criteria for success will give the group something against which to measure alternative solutions.

After framing an issue and envisioning success, effective groups involve everyone in thinking about all the possible alternatives for addressing the issue. Be creative and list as many solutions or approaches as possible. It’s time for thinking “outside the box,” not limited by the past or present problems, or worries about money.

After listing and discussing the consequences, ask the members of the group which alternatives they are ready to release and which they want to keep.

Through continued conversation about the alternatives, the group may be able to narrow the choices to two or three, with the advantages and disadvantages of each. Individuals will want to share what they think and what they feel about the alternatives. Eventually, you’ll be ready to make a choice. If you’ve already decided on a majority decision, then a vote is in order. If you have opted for a community consensus decision, you will test solutions until there is agreement to move ahead. In this style of decision-making, not everyone will agree, for consensus does not require unanimous support. Work until no one feels so strongly that they would stand in the way of the group moving forward. When your group has made a decision, write it down. Make it part of the record so the actual terms of the agreement can be revisited as needed.

Do it, and check in about it

The process isn’t really complete until the group goes ahead with the decision and observes the actual results, the positive outcomes and the not-so-positive outcomes. Effective groups revisit their big decisions from time to time and ask them-selves “what did we learn from that?” or “what meaning should we take forward about that?”

Who should be involved in decision-making? Well, it depends . . .

Sometimes decisions are made at different levels in a group or organization. We might have experienced being in a group where a leader has decided something and announced it to everyone else. We may feel quite differently about our support for that decision than a case where we worked through community consensus. In general, according to David Straus, the greater the level of involvement by members of a group or organization, the greater the level of ownership or support for a decision. (See Chart 2.) Decisions made by consensus often result in a higher level of support than decisions made by majority vote, where some participants may feel like they “lost.”

So, should you involve everyone? The answer is based on how important it is to have a decision that has strong support. It has to do with how much time you feel you can invest and the extent to which involving everyone is best for the long term relationships that keep a group or organization healthy.

You might have heard about or read a book called Getting to Yes. Its authors bring years of experience from the field of mediation, which aims at mutually agreed-upon solutions to a problem or dispute, and negotiation, in which parties work out compromises to disputes. Roger Fisher and William Ury suggest four principles that help in any dialogue leading to group decisions:2

Putting each of these ideas into practice reinforces the belief that groups can build skills to make better decisions. Your group might add these to a list of ground rules that it uses to guide its work together. Some additional ground rules are noted in Box 4.

Will a facilitator help?

We have outlined a process that results in decisions that people feel part of and will support. We have suggested some conditions for effective dialogue that lead to good decisions, including some hallmarks for consensus decisions. Using these approaches will lead to generally better decisions, healthier groups and healthier organizations. For more help with meetings and groups, check out our other our GroupWorks fact sheets and the resources noted in the footnotes and below. (See Box 3)

Kelsey, Dee and Pam Plumb. Great Meetings! How to Facilitate like a Pro. Portland, ME: Hanson Park Press, 1997.

Box 1: A comparison of dialogue and debate

Ingrid Bens identifies the following ingredients of a consensus process:

Box 3: Personal and group pointers for good dialogue and decision-making

Rick Ross, a consultant to businesses and organizations, suggests the following practices for improving decision-making.

Ground rules help assure that behavior in the group is aligned with getting the work done AND maintaining good relations. Here are some ground rules that have proven useful:

Each group can discuss what ground rules will be useful. Once a group agrees on ground rules, it is often helpful to post them at each meeting. When ground rules are visible, any group member can reflect on them and gently remind others if they are not being followed.