In Maine, millions of wreaths are made each year. These wreaths are usually made from balsam fir tips. Balsam fir is used because it is plentiful in Maine and also an easy material to make wreaths with. The demand for balsam fir wreaths has risen throughout the years, which has resulted in an increased demand for balsam fir tips. In fact, some wreath producers purchase tips from other locations, including Canada, because of a shortage of tip harvesters.

The end portion of a balsam fir branch is called a “tip.” Tip lengths range from 12 to 20 inches. This tip may be broken into two or three pieces. These pieces are placed together to form a tip bunch and wired onto a ring to make a wreath.

Tips can be harvested only during late fall, after needles are “set.” At this time, the balsam fir tree stops growing and stays dormant until spring. Balsam fir tips would lose their needles in a very short time if harvested before this stage. So, it’s very important for the tip harvester to know when this change has occurred. Some tip harvesters have ruined many stacks of tips because they unknowingly gathered tips before this change.

The exact time of “setting” varies, depending on the particular area’s climate and the growing year. Experienced tip pickers may know when tips can be harvested in your area. The approximate time to begin harvesting tips varies across the state. However, the Maine Christmas Tree Association’s standards indicate that balsam fir brush should be collected after November 1 and a minimum of three consecutive 20-degree-F (or colder) nights. The tipping season usually lasts until mid-December, but there must be enough time for making and shipping wreaths before the holiday season.

Tips may be harvested from private or corporate-owned forests. Tip harvesters must receive permission to use private land. Many corporations issue permits for use of their land, and permit fees range from one to hundreds of dollars.

To avoid possible fines when transporting tips, make sure that you have written permission to harvest or a bill of sale from the landowner where you harvested.*

Balsam fir has dark green, blunt-ended needles that are about one inch long. Spruce looks similar to balsam fir, but has shorter needles with pointed ends. This makes the needles “prickly” to the touch. Hemlock may also be mistaken for balsam fir, but it can be identified by its short, blunt needles and by two white stripes on the needle’s underside. 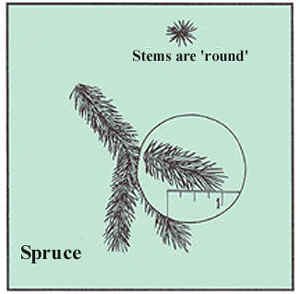 Figure 2: Spruce has sharp-pointed needles that are 1/3 to 2/3 inches long. 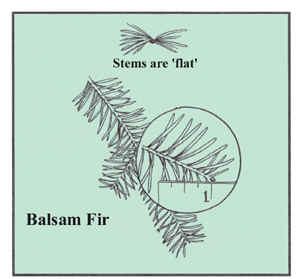 Figure 3: Balsam Fir has dark green, blunt-ended needles that are about one inch long. 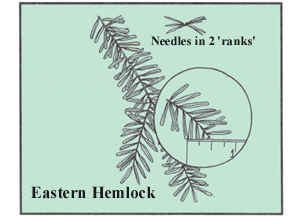 Figure 4: Eastern Hemlock has flat, blunt needles that are about 1/3 to 2/3 inches long (two white stripes are on the underside). 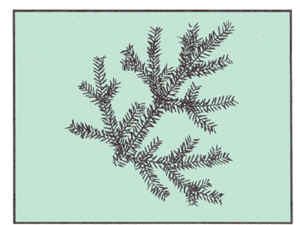 Figure 5: A high quality tip has needles on all sides of the stems, no needles missing and a sufficient amount of stems. 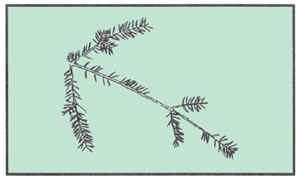 Many wreath producers are very selective when buying tips, because tip quality largely determines the quality of the finished wreath. Tips should be “rounded” (needles on all sides of the tips’ stems). The needles should be a dark green color, not yellow or brown. The tips shouldn’t have any signs of disease or insect damage.

Harvesting Tips From a Tree

Tips are usually harvested from the mid section of the tree (which generally has the best quality tips) rather than from the top or the bottom. The top part of a fir tree often includes branches with long stems, while the bottom branches usually have needles on only one side. Both are unsuitable for top-quality wreaths.

To harvest tips from a tree, the tip gatherer grasps the branch firmly between thumb and forefinger and snaps it off with a quick downward motion. Generally, 12 to 20 inches of the branch is harvested. The last major set of stems of a fir branch should remain on the tree. This allows the lateral branches to grow back fully in about three years. Using a long-handled tool like loppers or pruners will enable harvesters to reach quality tips out of reach. 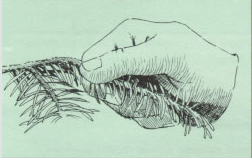 Figure 7: Step 1—Grasp the branch firmly between the thumb and forefinger. 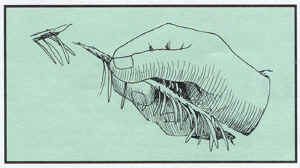 Figure 8: Step 2—Snap the branch with a quick downward motion.

Once the tips are removed from the tree, they are gathered together. One common tip gathering method is to stack the balsam fir tips into a “stick.” The tip harvester first cuts down a small conifer tree (four to six feet tall), then strips the tree of all branches except for the last set (located at the bottom end of the tree). These remaining branches are cut four to eight inches in length. The tip gathers use these sticks to transport their tips.

The tips are harvested and stacked onto a stick. The tip gatherer slides each tip down the stick until it rests on the stick’s bottom stems. The tips are stacked in alternate directions until the stick with tips weighs approximately 40 to 75 pounds. Twine may be attached to both ends of this stack to make it easier to carry.

Another tip stacking method is to collect the tips into a bundle. Stack tips onto two strings that lie perpendicular (cross-wise) to one another, then compress the tips by kneeling on them. The strings are brought up around the tips and tied together. Each bundle generally weighs 20 to 30 pounds. Some tip harvesters prefer this stacking method because the bundles are easier to handle. 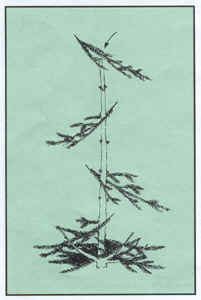 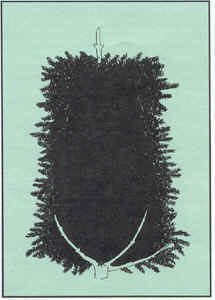 Individuals can sell the tips to local buyers (usually a wreath wholesaler or retailer), who provide tip specifications (required tip length, quality and stacking method). These tips are sold according to their weight.

Be sure to locate a buyer before tipping season begins. Also, stay in communication with your buyer to avoid getting stuck with excess tips at the end of the season.

Illustrations by Mark A. McCollough