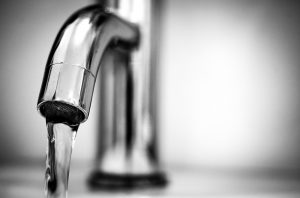 In recent years, pollutants have contaminated a number of Maine urban and rural wells. The pollutants include: nitrate from septic systems, fertilizer and livestock wastes; pesticides from farm fields; industrial chemicals from old landfills; and gasoline from underground storage tanks. Many people no longer take their drinking water for granted. Instead of assuming tap water is safe, many homeowners are taking steps to keep water quality in check. This publication examines the risks posed by small concentrations of toxic chemicals sometimes found in drinking water.

Water is never just pure hydrogen and oxygen. Water naturally contains minerals and microorganisms from the rocks, soil and air with which it comes into contact. Human activities add many more substances to water. Some contaminants—such as bacteria—come from the waste products of people and animals. Others—such as gasoline and industrial solvents—are synthetic chemicals, made and used for special purposes. Still other materials occur naturally (such as nitrate and salt), but human activities can greatly increase contaminant concentrations. Which of the many potential drinking water contaminants should you be concerned about? Some natural substances found in groundwater (iron and sulfur for example) can give water an unpleasant color or odor without making it unsafe. Radium is a radioactive substance that occurs naturally in some groundwater. Lifetime exposure to radium in drinking water slightly increases the risk of bone cancer. Recent studies show that lead released into water from pipes or solder can also represent a long-term health threat.

Although most microorganisms in water are harmless, some can cause problems. Health officials point out that the clearest health threat associated with drinking water comes from bacterial contamination. Bacteria from human or livestock wastes can cause serious health problems, such as dysentery, hepatitis and typhoid fever.

Nitrate levels in Maine’s groundwater have been rising in many areas. Common sources of nitrate include septic systems, livestock wastes and the use of nitrogen fertilizer on farm fields and lawns. High nitrate levels in drinking water can cause health problems for infants.

Public health officials understand the effects of bacteria, nitrate and some minerals. But the effects of a new and different type of contaminant—synthetic chemicals—are not so clear. These are the chemicals with the tongue-twisting names—trichloroethylene and carbon tetrachloride, toluene and ethylene dibromide. Unlike substances such as bacteria or lead, these chemicals are unfamiliar to most people. Public concern over drinking water quality often focuses on chemical contaminants.

Agricultural pesticides are one example. Pesticides have been found in a number of private wells in Maine.

Volatile organic chemicals, or VOCs, are another example. These compounds are used for a remarkable array of household and industrial purposes. For example, volatile organic chemicals are used in cleaning the grease off a bearing, keeping the refrigerator cold, dry-cleaning sweaters and decaffeinating your morning cup of coffee. VOCs have been detected in wells nationwide, in urban and rural areas, in public water systems and private wells.

No one would argue that the presence of these chemicals in drinking water is beneficial to your health. Some of the chemicals even have been shown to cause cancer and other health problems in laboratory animals and in people exposed to high concentrations in the workplace. Less certain, however, is the exact nature of the health risk posed by long-term exposure to small concentrations of the chemicals found in drinking water.

Some Causes of Well Water Contamination

Residents of rural Maine generally rely on private wells for their drinking water. Private well water contamination can occur anywhere, but some areas are more vulnerable than others. A great deal depends on the particular combination of land uses and natural features. In most cases, soil serves as an adequate filter. Water seeps slowly through tiny pore spaces in soil, allowing time for contaminants to break down into less harmful substances. However, under some conditions this filter does not work:

Some substances adsorb, or stick, to soil particles and remain in the upper soil layers; other substances do not. Also, some substances, such as aldicarb and nitrate, are highly soluble in water and readily move down through the soil with water.

Sizing up the Risks

Risk assessment is the scientific process of estimating the threat that environmental contaminants pose to human health. Scientists generally base risk assessments on toxicity studies performed on laboratory animals, and on data from human exposure in the workplace where a chemical is made or used.

Using such studies to estimate potential health threats to people exposed over many years to low levels of chemicals in drinking water is a procedure full of uncertainties. Uncertainties stem from incomplete data and the difficulty of comparing health effects on laboratory animals to those on humans living in a complex environment. The risk assessment for a chemical usually does not take into account all chemicals people are exposed to in water, food and air. Although risk assessment is an imperfect science, it does offer a “Richter scale” for toxic substances that allows us to compare the health threats of different chemicals.

The U.S. Environmental Protection Agency (EPA) has assessed the risk of a number of pesticides and volatile organic chemicals sometimes found in drinking water. Tetrachloroethylene, a common volatile organic chemical, is an example. It is used in dry cleaning solvents, metal degreasers, textile dyes, aerosols, household pesticides and many other common products. Experts suspect it can cause cancer and liver and kidney damage in humans. The EPA estimates that one part per billion tetrachloroethylene in drinking water could lead to one or two additional cases of cancer in a population of one million people who drink such water for a 70-year lifetime.

How risky is that? In light of current cancer rates, the risk does not seem particularly high. In a population of one million people, approximately 200,000 will die of cancer. Compared to this, low levels of tetrachloroethylene in the drinking water of a million people theoretically could cause one or two additional cases of cancer over a 70-year period. Statistically, that is an extremely small risk.

Chemicals, such as volatile organic compounds and pesticides, detected in Maine groundwater or drinking water usually occur at concentrations that present very little risk. Unfamiliarity with the chemicals and fear of cancer can, however, make the risk appear greater.

Looked at another way, estimated drinking water risks are generally far smaller than many accidental causes of death. The average American faces a one-in-a-million risk of death every day from a car accident, every six days from an ordinary fall and every 13 days from fire.

Compared to that, a person who drinks water contaminated with low levels of a chemical such as tetrachloroethylene every day faces an estimated one-in-a-million cancer risk every 70 years.

The average person is exposed daily to a variety of chemicals in food, air and common household products. Frequently, a chemical in drinking water represents only a small part of a person’s normal daily exposure to that chemical. This is particularly true for volatile organic chemicals, because they are so widely used.

Benzene is a good example. It is a common industrial chemical, produced by distilling coal and crude oil. Benzene has been linked to leukemia in humans exposed to high levels in the workplace. Benzene is a major component of gasoline. Like any volatile chemical, benzene disperses readily into the air and is a common air pollutant in urban areas. Benzene also occurs naturally in many foods such as nuts, dairy products, fruits and vegetables.

How does a person’s exposure to benzene in water compare to a person’s total daily exposure to the chemical? The National Academy of Sciences estimates that an average urban dweller is exposed every day to 850 micrograms of benzene from food and the air. Compared with this, Maine’s groundwater standard for benzene is 0.5 micrograms per liter of water. (One microgram per liter is the same as one part per billion). If water is contaminated at a level 10 times higher than the standard, and you drink about a quart per day, the water would contribute less than one percent of your daily benzene intake. Benzene may be an extreme case. But in general, drinking water contaminants often are one small additional dose in an environment where exposure to chemicals is commonplace.

Although risk assessment can estimate the degree of risk a chemical presents, it can’t tell you whether or not the risk is acceptable. That can only be determined by balancing the risk with its expected benefits.

People routinely accept some risks because the benefits are clear. For example, approximately 50,000 people die every year in car accidents, and many thousands of others are seriously injured. The immunization shots that we take to protect ourselves against diseases such as diphtheria and tetanus lead to serious complications and even death in some people. Yet people normally don’t hesitate to drive or to have their children immunized, because they see the benefits of cars and immunization. Drinking water contamination presents a more complicated picture. Oven cleaners, furniture polishes, paint and paint thinners, gasoline, the paper and ink used in this publication and countless other products contain chemicals that can turn up in drinking water if the products are not manufactured, used and disposed of properly. Every time you dry-clean clothes, put gas in the car or buy commercially grown fruits and vegetables,you make use of products and services that use potentially hazardous substances.

An important question in balancing risks and benefits is whether the people experiencing the risk also experience the benefits? Obviously, no one personally chooses the risk of drinking contaminated water. Nearly everyone, however, willingly uses and benefits from the products that can contaminate drinking water.

Putting the Risks into Perspective

Discussion of drinking water contamination always involves uncertainty. Scientists are only now beginning to study the potential health effects of the combinations of chemicals sometimes found in drinking water.

Obviously, contamination of drinking water, even at very low levels, should not be taken lightly. At the same time, the risks should not be exaggerated.

Good information exists on the most frequently detected contaminants, and contaminant levels in Maine have usually been low. These factors suggest that the risks presented by drinking water contaminants are, with isolated exceptions, no greater than more familiar, everyday risks.

Because of the tremendous volume of chemicals used in modern society, contamination of some drinking water is probably unavoidable. As a result, public agencies are using the risk management process to set limits on the toxic substances most likely to contaminate drinking water. Risk management tries to balance the scientific assessment of health effects with social costs and benefits.

Risk management cannot guarantee risk-free drinking water. It can, however, help to ensure that in a society where toxic substances are everywhere, risks are kept as small as possible.

Reprinted and adapted from Drinking Water Contamination: Understanding the Risks. University of Wisconsin Extension publication G3339. This material is based on work supported by the U. S. Department of Agriculture, Extension Service, under special project number 90-EWQI-1-9231.