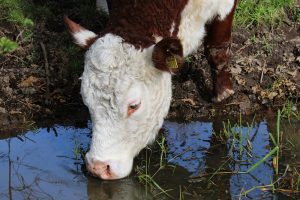 Nitrogen is an essential part of our environment. It makes up 78 percent of the air we breathe and is the most important nutrient for plant growth. But excessive levels of nitrogen — in the form of nitrate — have been found in some Maine groundwater.

Groundwater is a major source of drinking water in many areas of Maine. Nitrate-contaminated well water, consumed along with certain feeds that are high in nitrate, can pose health hazards to domestic animals. This publication examines the connections between nitrate in groundwater and livestock and poultry health. It also suggests how to avoid nitrate problems, and what to do if you think you have a problem.

Sources of Nitrate in Soil and Water

Plants need nitrogen to make amino acids and proteins — essential ingredients for plant growth. Plants can use nitrogen only after it is converted to ammonium (NH4+) or nitrate (NO3–). Plants readily use ammonium, but nitrate is the more “available” form on nitrogen for plants because it is water soluble and plant roots easily take it up.

Aided by beneficial soil bacteria, some plants use or “fix” nitrogen directly from the atmosphere. Other plants use only the nitrogen released from organic matter in the soil. Microorganisms in the soil convert the nitrogen locked up in crop residues, human, and animal wastes or compost to ammonium. Ammonium can also come from inorganic fertilizers. A specific group of microorganisms convert ammonium to nitrate.

When the soil contains more nitrate than plants can use, the excess can leach through the soil into groundwater. Low levels of nitrate have probably leached into groundwater, even from native forests and grasslands that existed before people inhabited Maine. Human activities, however, can greatly add to the “natural” level of nitrate in the soil and increase the potential for nitrate leaching. Excess nitrogen fertilizer can significantly increase nitrate leaching into groundwater. On irrigated, sandy soils, where nitrate is easily leached below the root zone, the application of fertilizer even at optimum rates will probably still contribute to higher nitrate levels in groundwater. Localized sources of nitrate leaching include septic tank leachfields, livestock holding areas, some manure storage facilities, and drainage juice from silos.

While some plants naturally contain potentially harmful levels of nitrate, water rarely does. Nitrate-contaminated water is generally a health hazard to animals only when it adds to the high nitrate concentrations already present in some feeds.

Nitrate in itself is not very poisonous, but it becomes poisonous when it changes to nitrite (NO2–) in an animal’s digestive system. Nitrite than enters the bloodstream reacts with hemoglobin — the red, oxygen-carrying pigment of the blood — to form methemoglobin, which is not able to carry oxygen to the body’s tissue. If too much hemoglobin changes to methemoglobin, the animal will begin to show signs of a lack of oxygen: low tolerance to exercise, lack of coordination, labored breathing, blue coloring of mucous membranes, rapid heartbeat, abdominal pain and vomiting, blood discolored chocolate-brown, and abortions.

Nitrate poisoning is most likely in ruminants, such as cows or sheep. Microorganisms in the first stomach (rumen) of these animals change nitrate to nitrite. If the rumen is working properly and the animal receives adequate energy and minerals in its diet, the potentially poisonous nitrite is quickly converted to ammonium, and later used in protein-building.

However, if cows or sheep consume too much nitrate too quickly, nitrite will accumulate faster than it can be converted into proteins, and build to poisonous levels.

Other animals, such as swine and poultry, have no rumen to help digest roughage and convert nitrate to nitrite. In these animals, most of the nitrate is not converted to nitrite but passes unchanged from the intestines into the bloodstream and is eventually eliminated in the urine. Researchers have reported problems when excess nitrate was fed to young swine and poultry in experiments, but the grains and concentrates these animals normally consume are generally low in nitrate.

However, non-ruminant animals are very poor at converting poisonous nitrite to ammonium. If nitrate is reduced to nitrite before it is fed to the animal, poisoning is much more likely. Nitrite is rarely a significant part of the non-ruminant diet. It is formed in water only at very low levels. However, studies by University of Wisconsin researchers show that increasing vitamin A in the diet of young poultry can prevent nitrate or nitrite poisoning.

Horses are single-stomached animals, but their large cecum acts much like a rumen in digesting roughages and converting nitrate to nitrite. Therefore, horses are more susceptible to nitrate poisoning than are swine and poultry.

There are two kinds of nitrate poisoning — acute and chronic. While it is relatively easy to determine a fatal nitrate dose, it is very difficult to determine a dose that produces chronic, non-fatal symptoms — or to prove that such symptoms are from nitrate poisoning. Many general symptoms, such as poor appetite, poor growth and even abortions, are often blamed solely on nitrate. But they may be caused or worsened by disease, poor nutrition and poor management. For example, poor performance on a ration low in energy or lack in essential minerals is apt to be worse if nitrate is also present. No one has yet identified a symptom or chemical diagnosis that specifically points to chronic nitrate poisoning. Chronic problems caused simply by nitrate are probably rare.

What to Do If You Suspect a Nitrate Problem

If you suspect unusually high nitrate concentrations in your well water, you can send samples to a laboratory for analysis.1 The well should be tested for both bacteria and nitrate because high bacterial counts are often found in water with high nitrate levels. If the water contains coliform bacteria, it is not suitable for human consumption or food preparation, including use in a milkhouse.

It is relatively easy to obtain a good water sample, but remember that the amount of nitrate in well water can vary, depending on groundwater movement, infiltration of rainfall and the source of the nitrate contamination. A single sample and analysis can lead to a false sense of concern or security.

Most laboratories will report the nitrate content of water as parts per million (ppm) of either nitrate (NO3) or nitrate-nitrogen (NO3-N). (To convert NO3-N to NO3, multiply by 4.4. To convert NO3 to NO3-N, multiply by 0.23.)

What to Do If Well Water Is High in Nitrate

What can you do if your water contains nitrate at a concentration that makes it risky for livestock use? First, give your animals low-nitrate feeds. Most plants store nitrate in their roots, stems and leaves; animals eating plants invariably consume some nitrate. Plants differ, however, in how much nitrate they store. Legumes (alfalfa, red clover, etc.) are lowest in nitrate, while corn, sorghum and sudangrass store the most. The cereal crops (oats, barley, rye and wheat) fall in between. Weeds commonly found in corn, grain and hay fields generally store high amounts of nitrate.

Nitrate concentrates mostly in the stalk, with less in the leaves and virtually none in seeds or grain. Stalk concentrations are highest in the part closest to the soil and are higher in young plants. Under poor growing conditions (drought, damage from frost, hail or herbicides, shortage of other nutrients), nitrate will temporarily increase because plants lose some of their ability to convert nitrate into amino acids and proteins. Different feeding methods also change nitrate concentrations in feed. Hay or hay crop silage generally contains little nitrate because forage grasses and legumes are naturally low in nitrate. Green feeding or pasturing on forages high in nitrate presents the greatest danger of nitrate poisoning.

Nitrate in groundwater cannot be removed by filtering, softening, boiling or by letting the water stand. For home use, nitrate can be diluted or removed by distillation, reverse osmosis or deionization, but these procedures are too expensive to be practical for livestock water supplies.

Beyond feeding low-nitrate feeds, the best solution is to eliminate the source of increased nitrate concentrations in the drinking water. If the contamination is local, such as seepage from a livestock holding area or a septic tank, you might be able to solve the problem by establishing good drainage away from the well and adequately sealing it. But area sources, such as from heavy use of nitrogen fertilizer in areas of sandy soils, can’t be solved by an individual. If the source cannot be located or controlled, and if nitrate concentrations are consistently high enough to be dangerous, the only solution is to relocate your well.

NOTE: If animals show signs of nitrate poisoning, call your veterinarian. A veterinarian can determine if nitrate is the problem and, if necessary, administer the antidote, a two percent methylene blue solution given intravenously.

1 Water samples can be analyzed at private laboratories or at the Maine Health and Environmental Testing Laboratory.