Bulletin #8048, Play and the School-Age Child 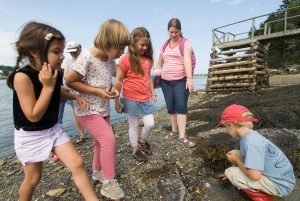 Liar, liar, pants on fire!” “Cross my heart and hope to die.” “Finders keepers, losers weepers.” “Made you look! Made you look! Give your mother a dirty look!” These stories, myths, songs, tricks and riddles have deep, ancient roots.

For centuries, children’s games and activities have included pulling wagons, playing with balls and tops, riding hobbyhorses, juggling, dressing as grown-ups, playing tug-of-war, holding pretend weddings, rolling hoops, and playing marbles or jacks. Children anywhere today might “invent” blindman’s bluff. Nearly everyone has played “hide and seek” where one is “It.”

Games and activities belong to children, and are part of a deep child culture that links children together throughout the world. It is an independent culture that only children control. Rhymes and games change over time and place, but their purposes remain remarkably constant: fun and fairness.

Play appears to be only idle fun, but the purpose of play is actually about learning fairness, following rules, respecting oral contracts and taking action against wrongdoers — things that help children develop a sense of ethical and moral behavior. First learning to follow rules, then later creating rules, are the most important parts of play.

Here are some suggestions on how to foster play that leads to greater understanding in children.

Fairness is Most Important

Parents can observe that while play appears to be only idle fun, play is actually about following rules, respecting oral contracts, taking action against wrongdoers and, most importantly, is a primary way to learn fairness and justice. Children’s interactions over “rules” build the groundwork for ethical thinking and behavior.

These things are not the concern of preschool-age children. Preschoolers may appear to play by rules, but in fact have little understanding of what rules mean. Around the age of 7, children being to play with some understanding of rules, and by ages 10 or 11 discover that games can change because new rules can be invented.

Observe your children and you may find they accept new rules only if the rules foster the two main features of games: fun and fairness. Once rules are changed, you may observe that children demand stricter-than-ever adherence to newly invented rules. This is because changing rules makes games more complex, and games cannot continue if new rules are not respected by all. Not surprisingly, failure to follow rules means being unjust and unfair, a major source of conflict among children.

Desire for respect is strong enough that during play most school-age children treat others as they themselves want to be treated. In addition, play helps teach not only justice and fairness, but gender identity, social power, rebellion against injustice and social rights. Children learn a surprisingly meaningful set of adult ideals and values through play. One of the most surprising findings from child-development research is that children’s basic notions of morality appear to stem less from parental discipline or lessons taught in Sunday school, and more from social interactions with peers in the natural course of play.

A recent study suggests 8-year-olds learn moral reasoning best by actively puzzling through problems with other 8-year-olds, rather than working out problems under adult guidance. This finding does not suggest children have no need of adult guidance, but rather that adult guidance is not the only way to foster moral development in children.

Through play, children learn that rules do not all come from adult authority, but can come from within, as well as from peer group consensus. By obeying self-made rules, children begin to learn how to make ethical and moral decisions. Importantly, through play children learn to incorporate the sense of morality, the underlying values of reciprocity and fairness.

How Children Play at Different Ages

Seven-year-olds are learning the importance of following rules. They like table and card games with simple sets of rules. Most can handle losing a little better than a year earlier because they have learned if they lose they can keep playing until they finally win. Many 7-year-olds still prefer playing alone and are not as adventurous as they will be in future years, making them less likely to create game rules.

In contrast, typical 8-year-olds no longer like playing alone and are generally far more active than are 7. While they enjoy models, dolls, chemistry sets, cameras and reading, they begin to enjoy both informal and organized sports and games like baseball, Parcheesi, checkers, or Monopoly, and their interest may reach near passion. Children this age readily go out of bounds with games like hide-and-seek or Rover, that include running, jumping, chasing and tree climbing. These games have rules for both play and social behavior that must be precisely followed and, at this age, rules are rarely changed. Failure to follow rules means being unjust and unfair, a major source of conflict among children.

Nine-year-olds continue what was learned at 8. They play hard and endlessly. By 9, individual play interests become very strong, making it difficult to predict what might be favorite activities. Many begin to focus on what has become most enjoyable, for example, organized or informal sports, reading, computers, building or the more competitive table games. By this age, previous experiences have led to enough confidence to begin altering games and activities by changing or altering rules.

By age 10 or 11, play becomes paramount, even while many show signs of being on the verge of more mature interests. They may call the play of younger children “babyish,” then turn around and enjoy the play themselves. Children this age frequently wander far from home in search of play opportunities, viewing school and chores as interruptions to the more important life of play.

For many, interests in clubs of all kinds becomes strong. They enthusiastically make up clubs and club rules of their own, demanding high standards from members that include following rules of membership and  belonging.  By 10 or 11, most children eagerly invent new rules to make play more exciting, and demand that new rules be understood and followed to the letter by all.

By 12, many children become rather calm and even-tempered in interactions with family, school and each other. While some view this as a calm before the storm of adolescence, the period suggests that many children have achieved a new level of comfort and security with themselves, even if temporary. They continue to narrow and focus their interests, but the expansiveness of earlier play disappears, even though their enthusiasm remains.

Typical 12-year-olds appear to have grown light-years beyond what might have been expected only a year earlier. Ratings of themselves and their places in the world take on a “valuative” tone. Many admit that even without peer influences they sometimes do things they believe are wrong. Many express having a heavy conscience that often bothers them, but at the same time are more likely than earlier ages to want to figure what is right and wrong for themselves.

Interactions with peers continue to grow in importance, physical changes begin, and adult  interests begin to replace the games and activities that were still strong at 11. Importantly, most 12-year-olds depend less on what parents say than they might have a year earlier.

Many may now accept some responsibility for having done wrong, reasoning simply that others will not like them if they do not do so. This represents a big step in moral development. Ethical and moral behavior become a conscious focus for children of this age.

The intense play of school-age children influences them to consciously think about fairness and justice, rules, contracts and sanctions in the wider world, as well as their potential contributions to it. Over time, childhood play will hopefully develop into adult playfulness, a quality that will, in turn, greatly enhance the ability to raise happy, healthy, morally responsible children.