Adults become active in late March to mid-April and are found mating and feeding on the bark of terminal leaders. Eggs are laid from mid-April through June in the bark of the previous year’s leader. Upon hatching, grubs start tunneling downward under the bark. As they progress, the grubs gather in a feeding ring which effectively girdles the leader. Typically, the top 1-1/2 to 2 feet of the main stem is killed, although severe attack may result in the loss of 2 to 3 years of growth. Weevils usually do not attack trees less than 4 to 5 years old, or less than 3 feet tall.  Infested trees exhibit a wilting and browning leader, usually by July. Weeviled trees eventually develop two leaders and a bushy appearance, thus reducing the value of ornamental trees.  Trees are rarely killed by the weevils.

Mature grubs bore slightly into the woody stem where they form fibrous chip cells in which they pupate. By mid-July, some weevils have matured to the adult stage and emerge from weevil-infested leaders. These new adults feed on the new shoots from late September to early October in upper 1/3 of the crown. Usually by November, all weevils have entered the ground litter, often at the base of host trees, to over-winter. 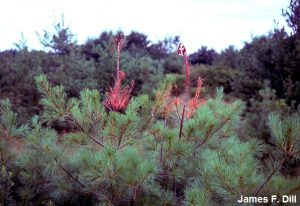 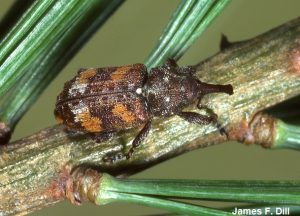 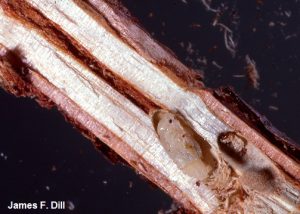 At low infestation levels, prompt removal and burning of infested leaders before the weevils emerge reduces the chance of population buildup. Prune infested leaders at a point below the tunneling grubs, at least including some green bark at the base of injury. Immediately burn cut leaders to destroy the larvae and pupae. Wilting leaders may be detected in June and July, but be sure to prune by mid-July to prevent emergence of adults.

Pruning infested leaders early in the season before completion of new shoot growth promotes establishment of a new dominant branch and correction of the stem form. Early pruning also prevents the grubs from penetrating the node of the first whorl of branches, reducing the amount of weevil-induced damage.

One alternative for preventive pruning is to avoid planting white pine or spruce in areas of high weevil hazard. In addition, bear in mind that heavy clay soils and densely sodded fields might increase the chance of weevil attack.

Close spacing of trees in a plantation stimulates height growth and natural pruning of weevil-attacked trees. In addition, the physical characteristics of bark in dense or overtopped stands reduces the likelihood of adult weevil attack and subsequent brood development.

Partial shade helps protect the leaders from weevil attack by encouraging less preferred bark thickness and bark temperature. Overtopping hardwoods or other conifer species help protect young pine and spruce when in the greatest need of protection. Overtopping tree density should provide 45% to 50% shade until the young trees are released when 16 to 18 feet high. However, the disadvantages of partial shade, reduced rate of growth and whipping injury, must be kept in mind.

Placing tanglefoot or other sticky substances on the wrapped leader, or wrapping tape with the sticky side out around the leader, may also prevent infestation. Never place sticky materials directly on the tree, as injury may result. During egg-laying season, a nylon stocking can be secured over the leader as a barrier to the female white pine weevil.

Corrective pruning of injured tops should remove all but a single, dominant shoot at the topmost healthy whorl. This promotes healing, resumption of vertical growth and straightening of stem form. Corrective pruning may be postponed until the year after weevil injury to ensure that at least one lateral branch survives ice and snow damage or repeated weevil attacks the following year.

Special thanks to the Maine Forest Service for much of the content of this publication.