The adult tick has eight legs as compared to six of an insect.  Ticks can feed on a variety of animals including birds, amphibians, reptiles, and mammals.  Tick encounters have been increasing recently due to more people getting out and enjoying nature, more landscaping favorable to tick habitat being incorporated into public areas, and the influx and spread of the deer tick.  Because ticks are efficient feeders and tenacious once attached, there is potential for transmitting disease.  With the increasing incidence of Lyme disease, Mainers should be in the habit of doing tick checks after frequenting tick territory. To remove an attached tick, grasp the tick close to the point of attachment and exert a slow and steady pull.  The tick will eventually disengage. Disinfect the bite site.

As ticks go through their life stages (larva, nymph, and adult), they usually change hosts. The larval (these have six legs) ticks will attach to small animals and be dispersed by them. Nymphs will climb up higher plants to latch onto larger hosts.  Adult ticks can perch on plants for months waiting for a host to come by. Ticks may also seek out prey by detecting heat and carbon dioxide emanating from a potential host. Adult female ticks can feed from several days up to a month.

On humans, ticks can migrate to the hairline, the area behind the ears, or the armpits. Although they can attach anywhere on dogs, they commonly attach to the ear, shoulder, and upper leg areas. It takes five to six hours for a tick to become firmly attached and up to ten days for it to become fully engorged with blood. The female needs a blood meal in order to lay eggs. Ticks have been known to survive for one year without a blood meal.

The deer tick or blacklegged tick (Ixodes scapularis) is a small tick, mostly inhabiting southern and central Maine. It is capable of transmitting Lyme disease. The early signs of the disease can be a rash and flu-like symptoms. Untreated cases may lead to arthritic conditions and possible neurological problems. Two factors to keep in mind are, not all deer ticks carry the Lyme disease causing spirochete (bacterium) and, a tick must remain attached to the host for at least 24 hours in order to infect the host. For more information on deer ticks and Lyme Disease, refer to the Public Health Fact Sheet entitled: “Lyme Disease in Maine,” available from the Pest Management Unit, Forest and Insect Disease Lab, and the Bureau of Health. 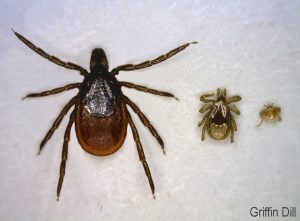 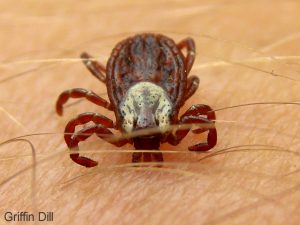 The American dog tick or wood tick (Dermacenter variabilis ) is larger than the deer tick and the unengorged female has a whitish shield on its back. This tick readily attaches itself to humans and is one of the most commonly encountered ticks in Maine. The highest populations of the wood tick are found in southern Maine.

Some wood ticks outside of Maine may carry the organism that causes Rocky Mountain spotted fever, a serious disease that can be transmitted to humans. The symptoms of Rocky Mountain spotted fever are headache, fever, and aching muscles two to 14 days after an encounter with a tick. Two to three days after the fever starts, a rash develops on the wrists and ankles, spreading to the palms, soles, and trunk of the body. Wood ticks are most likely to be found in open areas with tall grass or brush. Adults are first noticed in late April and remain abundant through June. Numbers seem to decline sharply after that, but some occur all summer.

The brown dog tick (Rhipicephalus sanguineus) is rarely found in Maine. It is transported here from areas south of Massachusetts on pets and occasionally on clothes. Although this species is not likely to feed on humans, it has been found in homes- even on beds. Dogs are the brown tick’s most common host and source of blood meals. This is why the tick is most often found in kennels and pet beds. Rats and mice may also be intermittent hosts. This tick does not overwinter in Maine.

Ticks can be controlled only on a very limited basis. The most important consideration is the use of personal preventive measures such as wearing a hat and light-colored, full-length garments that are tight around the wrist, ankle, and neck. Tucking pant legs into socks is also helpful. Treat exposed areas of skin with a repellent. A permethrin-based repellent is available for treating clothes. Adults should check themselves and children immediately after visiting a tick-infested area. If possible, avoid such areas.

Keep brush and grass around your home cut short. Keep stray dogs out. Keep pets out of tick infested areas. Repellent pet collars may help keep pets tick free. Infested pets can be freed of ticks with an insecticide available from pet shops.

Outside, pet shelters and areas around the home may be treated with carbaryl, deltamethrin, bifenthrin, cyfluthrin, or permethrin. Do not allow pets in the treated area until it has been dry for 24 hours.