That familiar buzzing in your ear, when you are trying to sleep on a summer’s night or that uncomfortable bite? Mosquito! These annoying insects are widely distributed and known by all. Although there are over 40 species in Maine, less than half are considered biting pests of humans. However, one of the most common complaints from people enjoying the outdoors during the spring and summer months is the annoyance caused by the often enormous populations of these small, slender, long-legged flies, the bites they inflict and, for some, the almost intolerable itching from the bite. Both males and females will use flower nectar for food, but it is only the females that feed on blood to obtain the required protein needed to produce and lay eggs. In this biting process the females can act as vectors of parasites and disease organisms, such as malaria, yellow fever, and various forms of viral encephalitis, and spreading them from one host to another. For example, heartworm, a disease of dogs caused by filarial worms, is transmitted by mosquitoes and is now established throughout most of New England. In the past, mosquito-carried diseases have not usually been considered a problem in Maine. Recently, however, concern has been expressed regarding the increased incidence in the Northeast of arboviruses (viruses carried by insects, ticks, and other closely related organisms) such as Eastern Equine Encephalitis (EEE), which was quite severe in 2009. 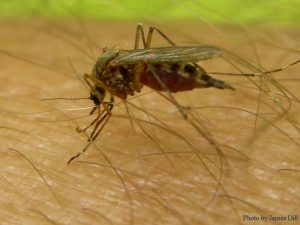 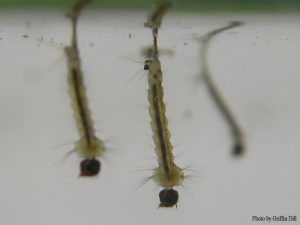 In 1999, another form of encephalitis known as the West Nile Virus (WNV) was detected in the eastern US in New York City. This virus, which is deadly to the American crow and its relatives, is also a serious problem for horses and humans. By 2003, the virus had spread across the continental US and caused several hundred human deaths. Most people contracting the disease develop a mild case of “West Nile Fever” that resembles a mild cold or flu. Maine, although having had many dead, WNV-positive birds, has not yet had a human case. As a result of increasing concerns of mosquito-borne viruses, a monitoring system has been developed for Maine mosquito species, which may serve as vectors, especially of WNV and EEE.

In Maine, most of the nuisance biting mosquitoes can be broadly placed in three groups based on their breeding sites or where they are likely to cause the greatest problem: urban, woodland or salt marsh. A few additional species breed in more remote areas in small stagnant ponds, bogs or swampy spots. Most mosquito vectors of encephalitis viruses are species that feed primarily on reservoir bird hosts, but will definitely bite humans or other mammals if the opportunity is presented. A list of potential vector species, which can be found in Maine, would include, but are not be limited to: Aedes vexans, Coquillettidia perturbans, Culex pipiens, C. restuans, C. salinarius, Culiseta melanura, Ochlerotatus japonicus, O. triseriatus and O. sollicitans.

Often species from other locations are accidentally introduced into areas. One such introduced species, the Japanese rock pool mosquito Ochlerotatus japonicus, was first found in Maine in 2000. This mosquito has spread rapidly throughout the Northeast after it was probably brought into the Mid-Atlantic States a few years ago in some old tires that were to be recycled. This species may breed in tire dumps and discarded containers in urban areas and is also an effective arboviral vector. 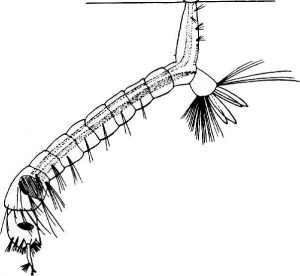 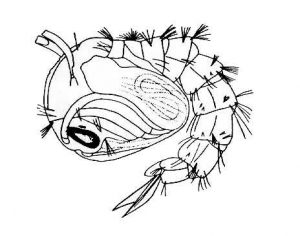 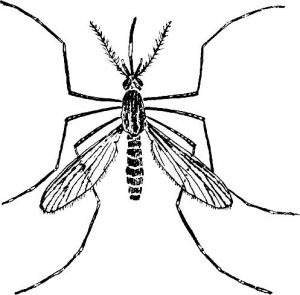 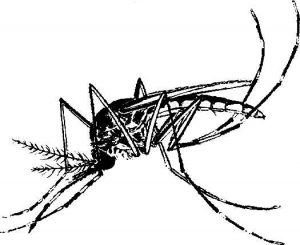 All mosquitoes pass through four developmental stages: egg, larva, pupa, and adult. Eggs are laid either in or near water or in moist depressions that will fill with water during the spring or in flood times. All larvae and pupae require water to develop to adults. Larvae may be predaceous or feed on organic debris and most need to be near the water surface to breathe. Depending on the species, the winter may be spent (overwinter) in any stage. One generation per year is the rule for the majority of Maine species except for salt marsh species or others in wet seasons. Adult mosquitoes may persist for many weeks or even several months, but the populations of all except salt marsh species usually start to decrease during hot and dry weather conditions later in the summer. Adults move around in short flights and may on rare occasions move long distances of up to a few miles. Mosquitoes are usually the most active in the evening or on overcast days. During the day, they remain resting on vegetation, taking flight only when disturbed by a suitable host. June is generally considered the month for woodland mosquitoes except in wet years when the season may be prolonged. Mosquitoes that appear briefly in the fall or spring and occasionally during the winter are females of overwintering species. The distribution and seasonality of Maine species is currently being studied.

The majority of our Maine mosquito species fall into this category and most overwinter as eggs or larvae with only a single brood or hatch each year. In extremely wet seasons, more than one brood can occur. Some develop from shallow ponds, swamp pools, and ditches. Others develop from temporary pools of water resulting from melting snow. Other breeding sites include rock pools, flood plain pools, and even tree holes. Contrary to popular belief, most mosquitoes will not breed in lakes or streams. Eggs normally begin to hatch in April or May. The tiny hatching larvae, which are also known as “wrigglers” or “wiggle tails,” are aquatic and undergo a few molts prior to pupation in May or June. Their rate of development increases as the temperature rises. Emergence of the adults usually occurs in late May or early June in central Maine. Females mate, seek blood, and deposit their eggs from a few days up to a few weeks after emerging, depending on the species. Eggs of most species remain dormant until the following spring except in unusually wet years.

Unlike the woodland mosquitoes, the salt-marsh mosquitoes (Aedes cantator and A. sollicitans) produce many generations per year and fly much longer distances, up to twenty miles or more from the coast, in their search for food. These species breed only in saline pools in or near salt marshes. Eggs occur in and about depressions and hatch upon being submerged as a result of flooding due to heavy rainfall or high tides. As a rule, the frequency of high-run tides determines the frequency of generations, one generation of mosquitoes per high-run tide. With each generation, the numbers of individuals increase greatly. In some seasons, there may be two high-run tides each month with a new generation of mosquitoes with each one. A third more southern salt-marsh mosquito, Aedes taeniorhynchus, probably occurs in southwestern Maine as well.

Most mosquitoes can be found at one time or another in urban areas, but there is a special group of mosquitoes whose habits tend to bring them into urban settings with greater frequency. These are the mosquitoes that breed in water that has collected in an assortment of containers from tin cans and tires to birdbaths and dumpsters. These species also frequently feed on birds and a variety of mammals and can transmit arboviruses to humans. This group includes two of the more common WNV vectors, Culex pipiens and C. restuans as well as the suspected vector C. salinarus, and tree hole mosquitoes such as Aedes hendersoni and A. triseriatus. Ochlerotatus japonicus would also be included in this group.