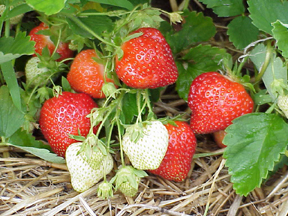 Strawberries are the most widely grown small fruit crop in Maine, and nearly all of the fruit is sold fresh through “pick-your-own” markets. Therefore, farmers must be very sensitive to the concerns of customers regarding the use of pesticides. However, there are several pests of strawberries which typically must be controlled with pesticide sprays in order to obtain a profitable crop. In 1992, the University of Maine Cooperative Extension initiated an integrated pest management program for strawberries, in hopes that pesticide applications could be reduced while crop quality could be maintained or improved.

The production system most commonly used in New England is the matted row. Plants are set out in the spring with about 18 inches between crowns and about four feet between rows. Flowers are removed during the planting year. Runner plants are allowed to root between the plants to form a row approximately two feet wide. Narrow plant rows are preferred to maximize fruit quality and ease of harvest. The plants are mulched in mid-November to provide winter protection. Oat straw and sawdust are the mulching materials of choice. Mulch is usually removed in early April. Frost protection is critical for strawberry flowers in the spring and is typically accomplished through irrigation. Harvest typically begins about the third week of June in Maine and continues for three to four weeks. Renovation of the plantings begins immediately after the harvest season is complete. The beds are mowed off, thinned and fertilizer is applied. Weed control, irrigation and supplemental fertilization are carried out throughout the remainder of the growing season.

Strawberry beds are usually kept for three to five harvest years before being plowed down and replanted. Pest control has largely been accomplished through pesticides applied according to the stage of growth of the plants (e.g. prebloom, petal fall) with little or no regard to actual pest populations in a field.

During the spring and summer from 1992 to 1994, strawberry fields on volunteer farms were regularly monitored by field scouts for major arthropod and disease pests, including strawberry clipper, Anthonomus signatus; tarnished plant bug, Lygus lineolaris; two-spotted spider mites, Tetranychus urticae; and gray mold, Botrytis cineria. Growers received scouting reports giving pest populations and management recommendations based on action thresholds adapted from research in New York, Nova Scotia and Massachusetts. Growers whose farms were not monitored were educated in monitoring techniques and kept abreast of local pest situations and management recommendations through a prerecorded phone message, a weekly Strawberry IPM Newsletter and a series of fact sheets.

In 1993 a survey was sent out to participating farmers in the fall in order to evaluate the effect of this program on pest management. Growers whose fields were monitored reported reducing pesticide use while achieving satisfactory pest control. In 1993, 83% of growers who used the phone message and received the newsletter reported that the program stimulated them to adopt IPM techniques for their fields. However, 33% of these growers found that these techniques allowed them to modify their pesticide applications, most often significantly reducing them. All of the farmers who responded to our post-season survey found the strawberry IPM program informative and helpful, and wanted the program to continue.

Future educational efforts in Maine strawberry IPM will emphasize alternative management strategies for major pest problems in addition to the pest monitoring and economic threshold information presently taught. Crop rotations and cultivation will be emphasized to supplement or replace herbicides, and biological control agents for insect and disease pests will be tested demonstrated.

Strawberries are a unique and valuable crop in Maine. Because of its “pick-your-own” market, this crop serves as an ambassador of sorts between farmers and the public by bringing people to the farm to see and talk with those for whom farming is a livelihood. Utilizing IPM on these farms will demonstrate to the public that farmers are making an effort to protect and sustain the environment, while still producing a high-quality product for their customers.

For a General Definition of Integrated Pest Management: