A survey was sent to farmers in March of 2021 requesting participation in a statewide survey about wages, pay, and benefits for farmers and employees. The survey was developed through a collaboration between the Maine Vegetable and. Small Fruit Growers Association and University of Maine Cooperative Extension. It was distributed through mailing lists of these two groups as well as other agricultural service provider agencies and grower associations. No similar report detailing Maine farmworker compensation exists, and the results of this survey are an initial snapshot. Although the turnaround was fast, with the survey closed just 1 month after it was released, we hope that the findings will be helpful for farmers and annual data from many more farms will be collected in future years. 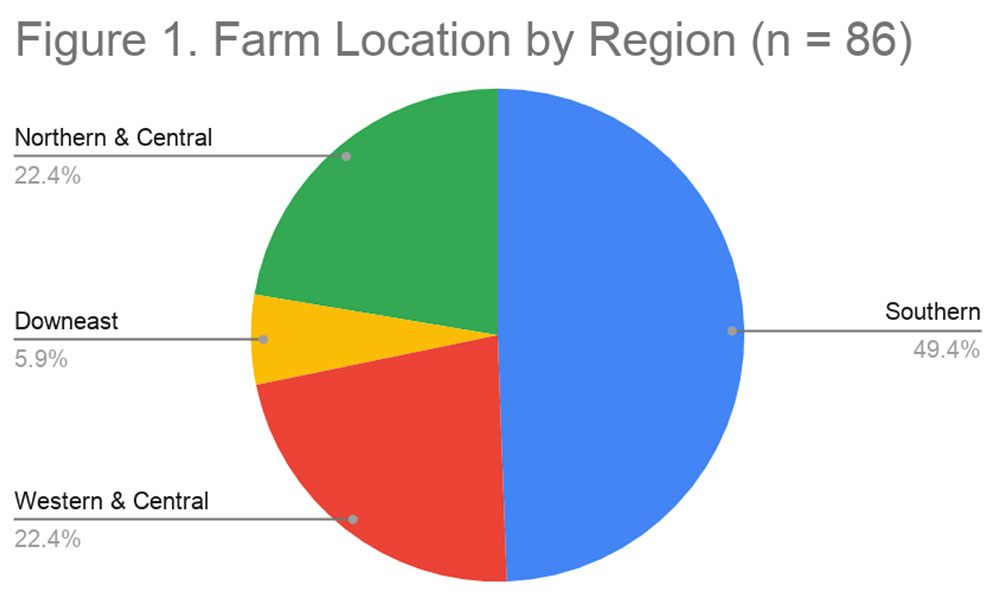 Production Type and Acres of Production

The greatest number of responses came from vegetable and small fruit producers (n = 41, 47.7% Figure 2). Detail of production type for the response of “other” was not provided. 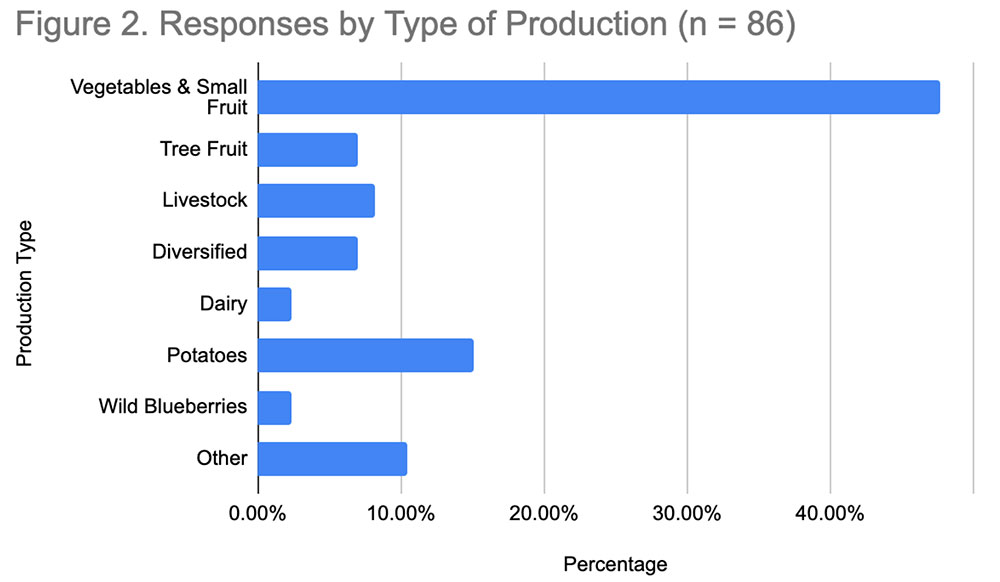 Acres in production (excluding woodlot) ranged from less than 2 acres to over two hundred acres, see Table 1. Nearly 20% of responses (19.8%) were from farms with 21-80 acres in production.

Farmers were asked how much income they received annually from the farm. Nine farm income categories were provided ranging from less than $10,000 to over $80,000. 11% of respondents (n = 9) chose not to answer. Figure 3 illustrates the farm owner incomes. 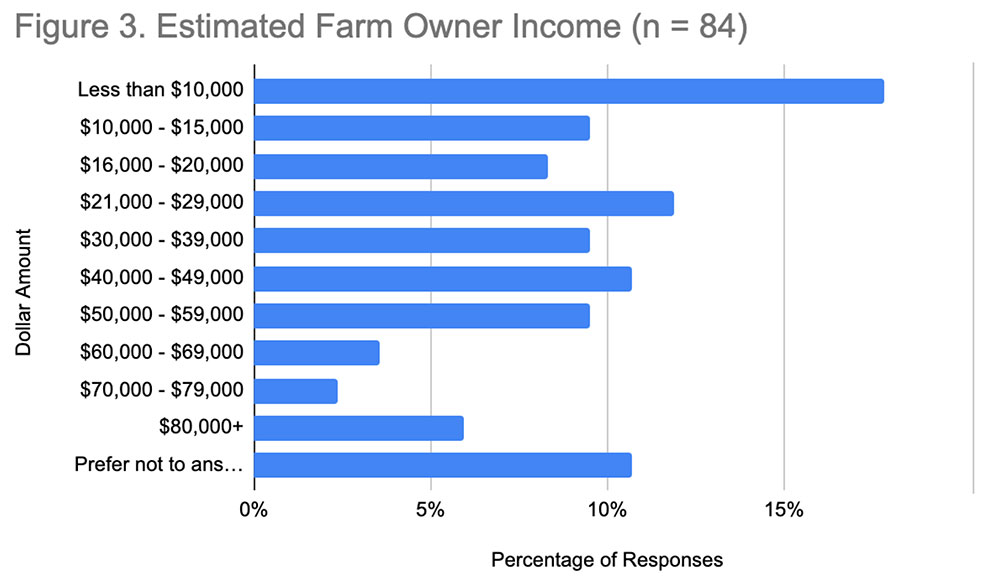 Number and Type of Employees

Multiple survey questions asked about the number and types of employees on the farm.

Unpaid Family Labor. Another question asked farmers “do you rely on any unpaid labor from family members to operate your farm?” 40.1% (n=34) responded “yes.” Of these responses, the number of hours of unpaid labor provided by family members is illustrated in Figure 4. 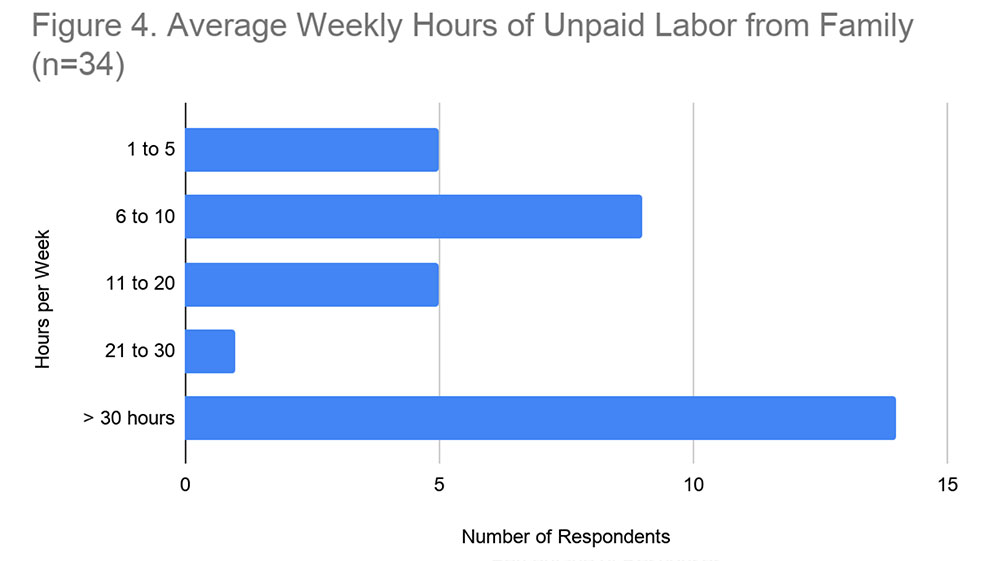 Paid Employees. Farmers were asked, “How many people do you employ at the peak of your season and year-round? (Please do not include yourself or any owners.)” Response categories were provided. Nearly half of respondents (n = 40, 47%) have no year-round employees. These figures include all types of employees. Figure 5 illustrates the number of employees at both peak and year-round. 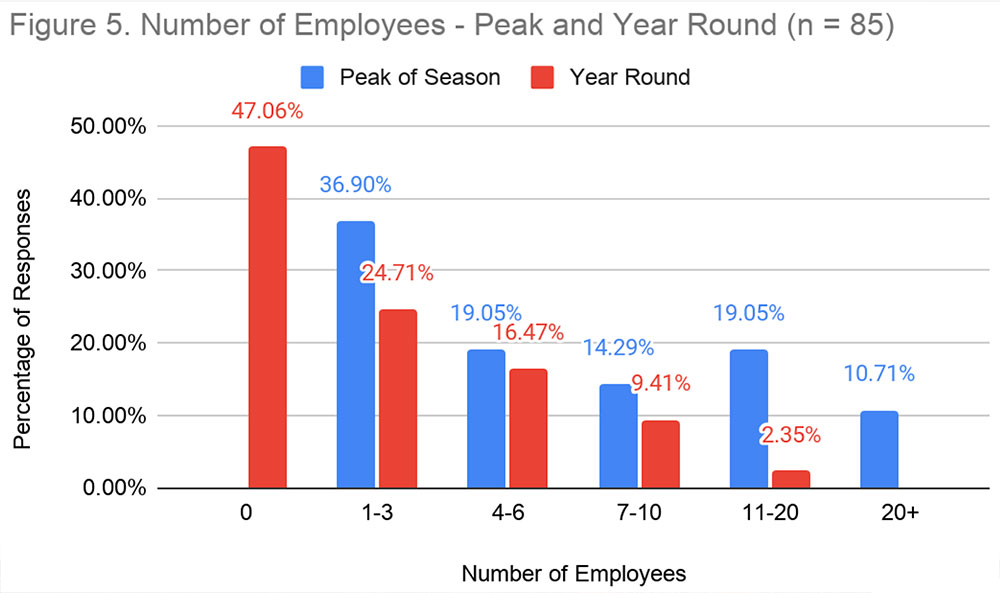 The two tables in this section summarize hourly and salary (if applicable) pay in both 2020 and 2021 as reported by farmers about their farms in the March survey. Averages, highest and lowest dollar amounts (range), and the number of responses under each category are reported.

Table 3 is a summary of the pay rates by geographic region. Due to lower responses in each region and to ensure farm anonymity, only information for “Hourly Farm Laborer” is reported by region. The regions were defined as Downeast (Hancock and Washington counties), North Central (Aroostook, Somerset, Penobscot, Piscataquis counties), Southern (York, Cumberland, Androscoggin, Sagadahoc, Knox, Lincoln counties), and Western Central (Kennebec, Oxford, Franklin, Waldo counties).

There were enough responses from potato producers (n=13) to create a separate potato-specific compensation table in Table 5.

The survey included the question “Do you provide housing as part of the compensation package for any of your employees? (Please do not include H2A workers, apprentices, or interns here.)”  Excluding H2A workers, apprentices, or interns, 11.63% of respondents (n=10) provide housing for employees as part of their compensation package.

A follow-up question asked, “Do you provide free room and board for apprentices or interns?”

9.6% (n=8) of respondents offer free room and board for apprentices or interns.

The survey included questions about PTO, types of benefits, and bonuses.

Respondents were provided with choices: sick, vacation, holidays, flexible PTO to answer the question  “Please tell us about any paid time off (PTO) you offer – How do you determine when this is appropriate to offer?”

Figure 6 illustrates the types of PTO that are offered by the 61 respondents who do offer PTO. Of those offering PTO, 95% offer paid sick leave, 85% offer paid vacation, 71% offer paid holidays, and 89% offer flexible paid time off for their seasonal employees.

For year-round employees, 86% are offered paid sick time, 70% receive paid vacation, 77% have paid holidays, and 86% are given flexible time off. 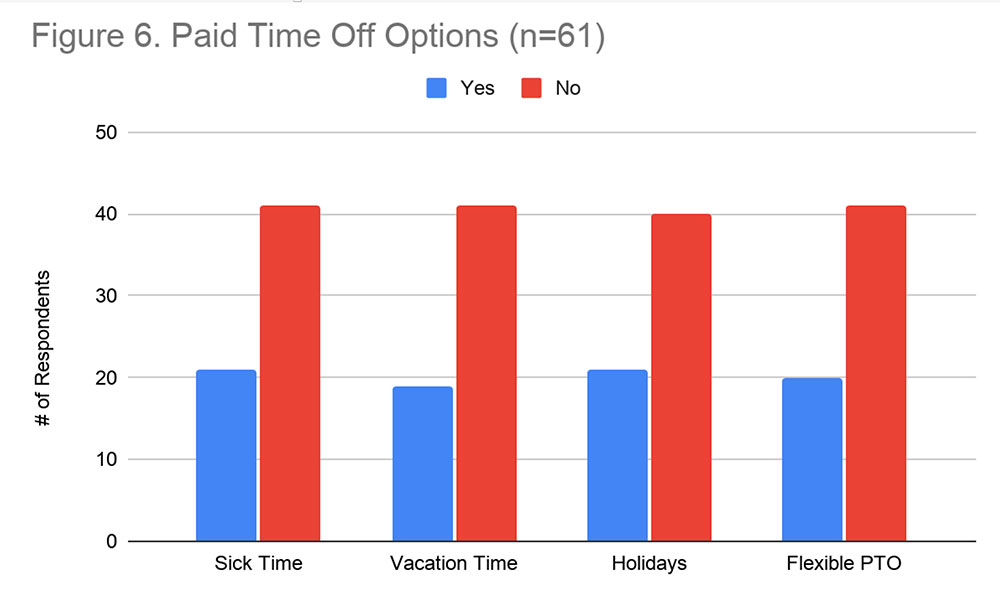 There was a wide variation in how farm owners approach determining paid time off (PTO) policies for employees.

Sick Time (n=61). 34% offer sick time. Some have no prerequisites or waiting period, while others reserve paid sick leave for managers or long-term employees only. Most allow employees to accrue time, ranging from 2-18 days per season.

Vacation Time (n=61). 32% offer vacation time. This benefit generally required long-term employment. Some required it not be taken during the busiest part of the season.

Flexible Paid Time Off (n=61). 33% offer some form of flexible paid time off. Thirteen farms (19%) offered flexible time off, which included vacation time in some cases. A majority of respondents allow employees to accrue this time from the day they begin work, and some offer this to full-time employees only. Each described a policy they have come up with and some said that they include this in their employee handbook.

Other Benefits (n=61). Thirteen farms (19%) report offering health insurance to year-round employees with nine (15%) also offering retirement accounts such as a 401k or IRA. Many farms reported offering free farm products and or discounts to their employees.

Raises (n=86).  48.8% (n=41) reported offering raises during the season, while 51.2% (n=43) do not. Of those offering raises, they ranged from .25/hour to $2.00/hour with 28% of respondents offering .50/hour raises, while 35% offer raises of $1.00/hour. Raises are based on performance, competency laid out in the employee manual, and generally evaluated mid-season or some other regular interval. A typical response was “When an employee is working faster, taking initiative and contributing to the farm without being asked.”

Bonuses (n=86). 55% (n = 45) reported offering bonuses, which are primarily based on quality of work, tenure at the farm, and whether the farm is having a particularly successful season. Many also mentioned Christmas bonuses for year-round staff.

The 2021 Maine Farm Worker Compensation Survey was created in response to numerous, unsolicited comments from farm operators throughout the state, concerned and uncertain about how their worker wage rates compared to other farms in their areas.

The data from the survey is a snapshot of the current farm worker compensation practices on Maine farms. While the respondents represented a wide diversity of regions and production types, the majority of respondents were vegetable and small fruit producers (49.4%) from Southern Maine (47.7%). There was a fairly even and wide representation of acreages farmed and farm owner incomes.

The data in the worker compensation tables will assist farm managers to make informed decisions about pay rates and benefits to offer based on comparable positions within their regions and production types. Through the review of this data, we hope that farmers will be more confident and competitive in setting their wage rates, and better able to attract and retain a reliable workforce during this time of a tight labor market.