September 1, 1915 Joseph Henry Bodwell started his new job as county agent for Piscataquis County. Dr. Leon Merrill, Dean of the College of Agriculture and Director of the Agricultural Extension Service for the State of Maine told him, “You will start out by hiring a horse and wagon and making calls on farmers to get acquainted… Establish an office and I will come up to visit you when you get settled.”

Some farmers in the county did not think this young man from college would have anything helpful to teach them about farming and made Joe’s first weeks on the job very difficult.

Frank Merrill was the most vocal about his lack of respect for this new county agent. Frank was the Pomona Grange Master and farmed 50 acres of potatoes, a herd of Holstein cattle and Percheron draft horses.

One day, Joe arrived at Frank’s farm a day that fellow farmers were helping fill his silo. He asked if he could have 10 minutes time to have Frank show him the beautiful field of potatoes and then would spend the rest of the afternoon helping to fill the silo.

Joe was very familiar with tuber diseases and had noticed a few hills having rhizoctonia. He predicted that one of the affected hills would only have 30 worthless little potatoes, and Frank anxious to prove Joe wrong, dug up the hill and found a bunch of small, unsaleable potatoes. Joe pointed out another hill and said Frank would find six or eight good potatoes and no small ones. As it was Joe was proven right again, and the chiding ceased as Frank led the group of farmers back to work filling the silo. 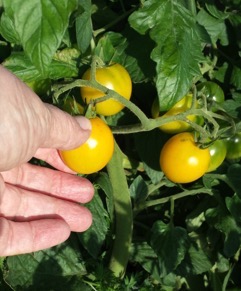 The One TomatoTMProject has reached the 5thanniversary to encourage people to grow at least one tomato in their garden. Yes, you heard us – we’re excited over one tomato! Of course, the plants produce much more than one tomato, but we celebrate the difference that one edible tomato makes.

Once again, the Piscataquis County Extension Association purchased 400 cherry tomato seedlings that were distributed throughout the county at various events along with information on how to grow them in containers. As in past years, at the end of the season we will ask recipients how their tomatoes did.

Last year we gave out three different varieties of cherry tomatoes: Sungold, Jasper and Esterina. 2017 was a very good tomato year and with the disease resistant varieties folks had great success averaging over $10 worth of cherry tomatoes from their plants. The most productive was Esterina, a sweet, yellow tomato. In 2018 Ellis Greenhouse in Hudson grew four varieties for the project. We added Sunrise Sauce a small, paste type tomato.

The Sedomocha School Garden began in 2013 as part of a Food Corps initiative to provide outdoor classroom space. Through the years the Piscataquis County Extension Executive Committee has provided financial assistance and physical labor grow the garden from 3 to 7 raised beds, install a rainwater catchment and drip irrigation system, and protect plants from roving wildlife.

Since 2015, Trisha Smith, UMaine Extension Horticulture Aide, has coordinated activities in the Sedomocha School Garden with David Murray and his second-grade class. This spring, all Sedomocha second-graders had the opportunity to participate in starting “Three Sisters” (corn, pumpkins, beans) crops, and planting, growing and eating lettuce.

Participants in the Piscataquis Passport Project tend summer crops, sample fresh vegetables straight from the garden, take some of their harvest home, or deliver to the Sedomocha kitchen for use in the summer meals program. Second graders start the school year in August harvesting late summer vegetables to sample and share with the cafeteria. Later in the fall, students harvest pumpkins, clean up the garden for winter and plant garlic. Gardening is an important way for kids to make connections with soil and food.

Pat Jones and Karen Maas planned and planted the landscape at the renovated Central Hall. The plantings include herbaceous and woody perennials as well as annuals.

Preliminary planning for landscaping at Central Hall began in 2015. Easy maintenance and color co-ordination were the primary considerations. The MG volunteers decided on perennials in pink shades that die back to the ground and can simply be cut back. Plants came from MG volunteer gardens, Rockwall Gardens, and Sprague’s Nursery.

They carefully selected trees and shrubs to complement the color and scale of the lawn and flowerbeds. They planted a dogwood tree near the entrance and requested the town of

Dover-Foxcroft replace an ailing street tree with an ornamental crabapple. The lawn is a work in progress. Many people have complemented the MGVs on their great work. 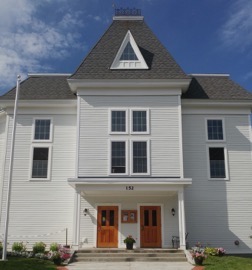 The eighth annual Maple Mania hosted by the Maine Maple Syrup Producers Association with the assistance of UMaine Extension, kicked off in Greenville in June with a trade show at the Barley Family Center in Greenville. Almost 100 producers from across the maple production region had the opportunity to check out the latest in maple technology, renew friendships, and tour the Moosehead Lake area. 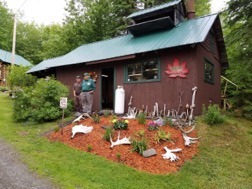 Bus tours of local sugarhouses included locations in Shirley, Beaver Cove and Blanchard as well as three operations on the Golden Road. Participants also had the opportunity to take a cruise of Moosehead Lake aboard the Katahdin.

Visiting with vendors, touring sugaring operations and enjoying the Greenville area was followed by a morning of learning with nine technical sessions options on Saturday morning. As usual, participants enjoyed good friends, a beautiful location and great learning!

Over twenty Sheep, Goat and Camelid keepers from the area attended the Keeping Small Ruminants Healthy meeting sponsored by the Piscataquis County Extension Executive Committee featuring Caterina Ruksznis DVM, who has experience caring for small ruminants in the practice where she works in Vermont.

Dr. Ruksznis was joined by Dr. Beth McEvoy & Dr. Karen Murphy at the Foxcroft Vet Clinic Barn in Dover-Foxcroft where the participants learned what they can do to prevent disease in their animals through lecture and hands-on live demonstrations. Topics included what is normal for their animal, vaccination schedule, deworming, nutrition, foot care, and basic veterinary care. 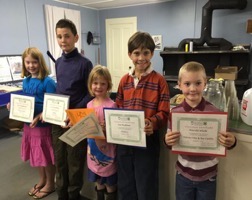 The towns listed below are where 4-H clubs, teams or groups meet, but youth from anywhere are welcome to participate if they are willing to travel. 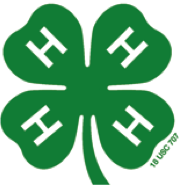 The Super Science 4-H Club from Piscataquis County has placed second in the statewide Envirothon for the past two years. Teams from all over the state participate in field events that tests what the youth know about wildlife, forestry, aquatics and soils. This is part of the STEM (science, technology, engineering and math) education with a focus on environmental stewardship. 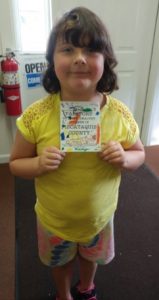 The Piscataquis Passport Project taps in to the spirit of community and cooperation central to UMaine Extension. In its second year, the Piscataquis Passport Project encourages kids and their families to access healthy food and activities in the Dover-Foxcroft area in the summertime. Youth age 5 to 18 got their Passports marked at locations such as Sedomocha School cafeteria for Free Summer Meals (breakfast and lunch), the Sedomocha School Garden, free community meals, Dover Cove Farmers’ Market, Thompson Free Library and Mayo Regional Hospital.

Piscataquis Passports were used to claim $5 in Veggie Vouchers at each of up to 6 visits to Dover Cove Farmers’ Market. Participants could choose to purchase fresh fruits and vegetables right away, or save for later in the season. Piscataquis County Extension Association, Piscataquis Healthy Food for All, and Farm in the Woods fund Veggie Vouchers.

Funded by the USDA National Institute for Food and Agriculture, the Rural Youth Futures project seeks to understand the goals and aspirations of middle and high-school youth in two traditionally forest-dependent communities of Piscataquis County, Maine and Coos County, Oregon.

The project aims to find out more about the connections between local communities, youth aspirations for the future, and the local economy. This information will help communities better engage the next generation of workers and entrepreneurs as residents and leaders, develop more targeted education and training opportunities, and attract more early-career people to relocate or return to rural places. The project runs from September 2017 through August 2020.

Dr. Colt Knight, UMaine Extension Livestock Specialist demonstrated how to smoke chicken at the 2017 Piscataquis County Extension Annual Meeting. The thirty plus attendees were able to taste the resulting chicken. It was delicious. 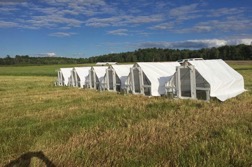 Following the meal, a short annual meeting was held and then Dr. Knight talked about the research project at the Witter Center where six different breeds of broilers were kept in chicken tractors. Feed and gain were recorded weekly and rate of gain for the different breeds calculated.