Ever wonder how to preserve all those great garden vegetables? Laurie Bowen, UMaine Extension 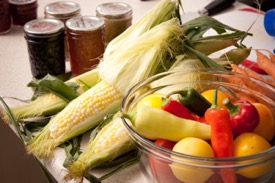 Community Education Assistant offers hands-on food preservation workshops to teach the basics of canning and freezing, including how to use water bath canners to preserve pickles, jam, and vegetables. There has been a strong interest in this topic with almost 50 people learning more about food preservation and food safety. 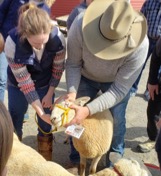 Building awareness of disease and learning screening techniques for sheep, goats, alpacas, and other small ruminants was the focus of the 2nd Annual Keeping Small Ruminants Healthy Clinic in April at the Foxcroft Large Animal Veterinary Associates (FLAVA) Clinic, in Dover-Foxcroft.

Sponsored by University of Maine Cooperative Extension and FLAVA, topics included what diseases are common in small ruminants and what screening techniques farmers can do to assess the health of their animals. Catarina Ruksznis DVM, FLAVA large-animal veterinarian lead the discussion on disease awareness in small ruminants and gave an overview of screening tests available. Colt Knight PhD, UMaine Extension Livestock Specialist, demonstrated and certified attendees in FAMACHA technique as a diagnostic tool that measures the parasite load in small ruminants.

Participants were encouraged to bring fecal samples from their animals so they could learn how to prepare the samples and use a microscope to assess parasite load in their animals. Beth McEvoy, Brian Blanchard, and Karen Murphy assisted with the hands-on activities. A special thanks to Wendy Russell and Dieter Bayerdorffer from Widdershins for providing the animals for the demonstrations.  Also, a special thanks to the chair and table rustlers George McEvoy, Bruce Tibbetts, Anette Moulton, and Trisha Smith.

With the goal of increasing the number of households that grow food gardens, consume food produced in their garden and recognize the UMaine Extension as a source of garden information, Piscataquis county adopted the One TomatoTM project. After five years 1,794 tomato seedlings have been distributed in Piscataquis County and it is estimated that over $14,700 worth of cherry tomatoes were grown and consumed by participants. 400 more plants were distributed in 2019.

19% of those receiving the tomato seedling had never gardened before and for 25% of the participants, this was their first contact with UMaine Extension. In addition to meeting the initial goals by having people start a garden and consume homegrown produce, this project has encouraged volunteers to become more involved in funding of the county office, distribution of the seedlings and review of the project impacts through the years. 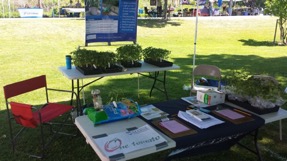 What started out to be a project to encourage county residents to grow their own food, by starting a garden with one tomato seedling, has also turned into a method of also introducing people to UMaine Extension’s garden resources including our publications, website, Facebook page, and e-newsletters.

This project has also been a way to encourage county executive committee members to get involved in funding, distribution of plants and review of the impacts of the project through the years. The county executive committee members have real ownership of the program and have come to expect the project to be done every year. Master Gardener Volunteers were able to contribute time to a program that enabled them to go into the food cupboards to work with people of different financial means.

One TomatoTM project is more than a give-away program since seedling recipients are asked to give feedback on how their tomatoes grew during the season. It is getting citizens more involved in giving feedback on vegetable varieties and a start in being involved in a citizen science project. Seedling recipients will stop Extension staff in the store or other places to comment on how well their plants are doing and how pleased they are to be able to have fresh tomatoes just outside their door.

In 2018, the project team members got a little too ambitious with five varieties. The harvest survey ended being too long for many participants. In 2017, three varieties were used and fewer varieties resulted in a 30% response rate for the harvest survey compared to a 22% return rate in 2018. 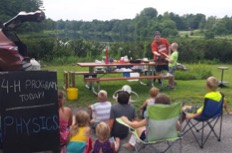 The ‘Piscataquis Passport to Summer Fun’ project began in 2017 to incentivize participation in the free summer meal program held at the SeDoMoCha school in Dover-Foxcroft. The collaborative effort led by Healthy Piscataquis (now Piscataquis Regional Food Center) and UMaine Cooperative Extension has since evolved into an even larger program focused on motivating kids and their families to engage with various community agencies, events and learning opportunities that support positive youth development and aim to reduce potential food insecurity and summer learning loss.

Youth ages 5-18 are enrolled in 4-H and issued a personalized, laminated ‘Passport to Summer Fun’, which they take with them on their explorations of the community, to be stamped or signed at selected events and locations. Younger siblings may participate, but won’t be considered 4-H’ers. Youth who sign up receive a passport that they have stamped at the:

One of the most popular features of the passport project is Veggie Vouchers. Each time the participants have their passports stamped at DCFM, they receive $5 in Veggie Vouchers (up to $30) to purchase fresh fruits and vegetables at DCFM. Veggie Vouchers are supported by the Piscataquis Regional Food Center, the Piscataquis Extension Association Executive Committee and Farm in the Woods. Youth will also find a new series of enrichment activities at the market this year coordinated by a Master Gardener Volunteer.

Since its 2017 inception, 132 youth have enrolled in the passport program and approximately $500 in veggie vouchers were redeemed at the market. The project is a collaboration between the University of Maine Cooperative Extension 4-H and Master Gardener Volunteers and a collection of ten community partners. Thanks to their efforts, we’re seeing more engaged kids at the market, out in nature, and in the garden!

The towns listed below are where 4-H clubs, teams or groups meet, but youth from anywhere are welcome to participate if they are willing to travel. SpIn Clubs are short term special interest groups that meet.

The Super Science 4-H Club competed in the statewide Envirothon and presented a poster. 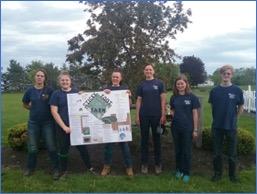 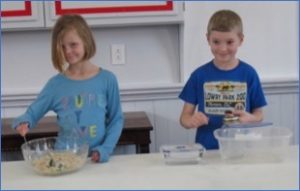 Public Speaking and Demonstration Tournament held at the Congregational Church in Dover Foxcroft – Members of the Wild Blueberries Cloverbuds gave a demonstration. 13 youth participated and gave presentations, illustrated talks and demonstrations on a variety of topics. Judges for the event included George McKay, Rebecca Huettner and Barbara Lockwood. Timer/ tabulators included Beth McEvoy and Shea-lyn Moulton. Seven presenters qualified to go to the state tournament at the University of Maine in Orono.

Brownville After School 4-H activities included duct tape creations, kitchen science, gardening, and two STEM Ambassadors led the group in learning about forest and paper products. The group took their annual trip to the University of Maine in Orono as part of this program.

The Sew Much Fun participants made totes during their Special Interest (SPIN) program during school vacation.

The 4-H year culminates in members having an opportunity to exhibit their projects at the Piscataquis Valley Fair. This year the 4-H Leaders Association expanded their space for educational activities in a tent outside the 4-H Exhibit Hall – Bell Building. The 4-H Clubs use the fair as a venue to conduct their silent auction fundraising event that helps fund their activities and trips throughout the year.

The annual awards program is where certificates, ribbons and other awards are given out for the hard work completed. Our thanks to the Valley Grange in Guilford for allowing us to use their facility for the annual awards program.  During the year several Piscataquis County 4-H members were able to participate in special trips within the state of Maine including the 4-H @ UMaine: Connecting Kids to Campus, and 4-H at the Maine State Senate for Page Day. National trips included two youth attending the Citizenship Washington Focus in Washington DC and the Communication Science Team represented Maine at Eastern States Exposition in Massachusetts.

There have been a number of transitions within the 4-H staff. In the fall of 2018, Barb Baker retired from her position as 4-H Youth Piscataquis and Penobscot Educator. Sheila Norman was selected to fill the new position of 4-H Youth Professional for Piscataquis and Penobscot Counties. Later this summer a new person will be hired to fill the 4-H Community Education Associate. 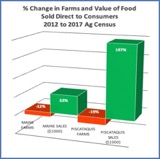 The Census of Agriculture is done every five years to measure the changes that have occurred in the farm community. Locally, some of the changes include an increase in the value of sales in Piscataquis County to $9.1 million in 2017 from $8.6 million in 2012 with a decrease in the number of farms to 188 farms from 203 in 2012. Maine experienced a 7% drop in farm numbers and a 13% drop in value of sales.

There has been a huge increase in the value of direct sales in Piscataquis County with almost 200% increase in the value of food sold directly to consumers from 2012 to 2017. In 2012 there were $264,000 in direct sales to consumers from 58 farms in Piscataquis County and in 2017 that increased to $785,000 in sales, but the number of farms selling direct decreased to 47 farms. 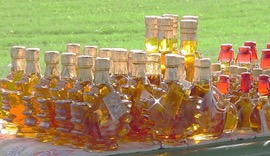 Maple Syrup production in Piscataquis County increased with 3,414 gallons produced in 2017 compared to 1,667 gallons in 2012 at 205% increase with only one more farm added to the list with a total of 21 farms producing syrup in 2017.