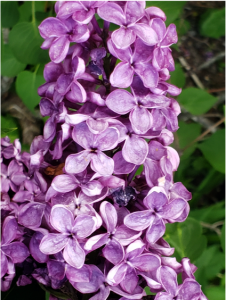 Every year we gets calls from people who are disappointed their lilacs bloomed only sparsely or not at all, even though there were gorgeous lilacs blooming all over the county – even in abandoned house lots and in yards that look totally uncared for. Here’s a rundown of the most common reasons a lilac might not bloom:

Shade: Excess shade is the most likely culprit when lilacs fail to bloom well. Lilacs bloom best in full sunlight, or at least a half-day of sun. Anything less will mean fewer flowers developing. When they’re in a location that’s shaded all day, lilacs rarely bloom at all. Sometimes the shade creeps up over the years as nearby shade trees grow taller and fuller. In many cases, the lilacs may have been planted in a poor location to begin with.

Pruning: If you prune lilacs back drastically, it may take a number of years before they begin to bloom again. They should produce flowers eventually, but it could take three or four years – maybe even longer.  If you prune only lightly, but wait until mid to late summer to do it, you may not see many flowers the following year. That’s because the flower buds for the following year are set shortly after the plant is through blooming. So if you do plan to prune, be sure to do it right after the flowers fade in spring. At the very least, you may wish to remove the brown flower/seed clusters which are unsightly.

Nutrients: Lilacs are not heavy feeders; they don’t need fertilizer to make them bloom. Often, in an attempt to help young plants become established, people will fertilize them several times each spring and summer. Plus, there’s usually some lawn nearby, which is also fertilized. This abundance of nutrients, especially nitrogen, encourages the lilac to make a lot of leafy, vegetative growth – which may come at the expense of flower bud development. If this appears to be the case, and the plant receives plenty of sunlight and hasn’t been pruned too heavily or at the wrong time, simply stop the fertilizing. Eventually, it should begin to bloom well.

Moisture: Lilacs grow best in well-drained soil. While wet, poorly-drained soil isn’t directly associated with lack of blooms, it is associated with plants that develop root rots or generally fail to thrive. If you have a young lilac in a low lying moist location, transplant it to a more favorable site if at all possible.

The Lyle Littlefield Garden on the University of Maine campus in Orono has an extensive lilac collection that the general public is welcome to come and see anytime during the year. Early June is the lilac bloom time. The Littlefield garden also has collections of crabapple varieties, rhododendrons, and magnolias.