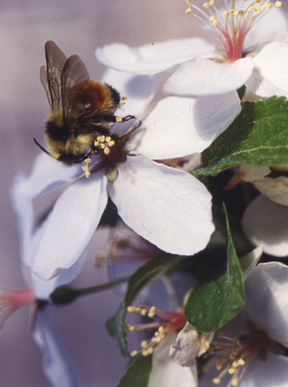 Flowering crabapples are some of the most popular trees in the Maine landscape. They are generally hardy throughout the state, although they can be injured and even killed in exceptionally cold winter. They are easily grown and widely available. Many superior cultivars are resistant to diseases that can be problematic.

Crabapples are often called “plants for all seasons” because they offer flowers in spring, high-quality foliage in summer, fruits in fall and winter, and a variety of sizes and forms. Few plants offer such outstanding beauty throughout the year.

Crabapples flower for a period of two-14 days between mid-May and early June. The white, pink or red buds open to single or double flowers, which range from white to purplish red. Most crabapples flower in midseason (June 1 in central Maine), but a careful selection of early, midseason and late cultivars can provide a succession of flowering in the landscape.

Like many eating apple cultivars, some older types of crabapples tend to flower in alternate years. Most newer introductions flower heavily every year.

New leaves in spring may be green or bronze. Most crabapples’ leaves turn green about a month into the season, but some retain a reddish or purplish color throughout the season. Most crabapples do not have outstanding fall color, but some do turn orange, bronze or yellow.

Both crabapples and “eating” apples are members of the genus Malus, with crabapples having fruits smaller than two inches in diameter. Some crabapples’ fruits are as small as 1/4 inch in diameter. Fruit colors include yellow, orange, red and purple. Some are fully colored by August, while others do not reach full color until September or October. The fruit of a few types of crabapples drop soon after ripening, but the fruit of others remains on the trees until the next spring.

Fruit should be a major consideration when choosing a crabapple. The persistence of the colorful fruit makes it at least as important in the landscape as the spring flowers. Some larger-fruited types are also good for making jams, jellies, and preserves. Smaller-fruited crabapples are prized as bird food. Birds eat some types in fall and early winter and leave more sour types until spring.

Crabapples range in height from five feet to 40 feet. Many crabapples are rounded, but others are upright-spreading or narrow-upright in shape. A few have a graceful weeping form. These various forms make the crabapple a perfect choice for many locations and provide much interest in the landscape throughout the year.

Use in the Landscape

Flowering crabapples have been planted in American landscapes since the late 1700s. Their outstanding attributes make them an excellent choice for many locations. A single tree planted in front of evergreens creates a focal point in spring, summer, fall, and winter. Dwarf types are effective in borders and even in flower gardens. Crabapples are good street trees, especially where overhead wires prevent the use of larger trees.

The planting site should have full sun. Crabapples tolerate a wide range of soil types with a pH in the range of 5.0 to 7.5; a pH of 5.5 to 6.5 is ideal. Test the soil before planting. Apply lime, organic matter and/or fertilizer according to the test results. Good soil drainage is essential. Very dry or wet soils should be avoided. If properly cared for, crabapples perform well in narrow planting strips, large containers and planting boxes.

At the nursery, many crabapples are grown three to six feet in height in the field, then dug in the fall and stored cold without soil over the winter. In spring, these bare root trees are available for planting.

When handling a bare root tree, plan ahead and plant as quickly as possible. Choose a site, test the soil and amend if necessary. When you obtain the plant, make every effort to prevent the roots from drying out. Place the tree where it is protected from hot sun and wind. Immerse the tree’s roots in a bucket of water, or cover the roots with wet burlap or straw. Do not leave the roots in water longer than overnight. Then follow these steps:

Some crabapples are grown and sold in containers. These trees are best planted in spring but can be successfully planted later in the growing season if the site is well chosen, if good planting practices are followed, and water is supplied as discussed above.

Crabapples, especially larger specimens, are also available as balled-and-burlapped (B&B) trees. B&B trees are field-grown in nurseries, then dug for transplanting into the landscape. Their root balls are protected with natural-fiber or plastic burlap. Like container-grown crabapples, these are best planted in spring but can be successfully planted later if care is taken.

Dig a hole only as deep as the depth of the root ball, and place the plant into the hole on firm native soil. Remove the ropes, nails or other fastenings from the burlap. If left intact, the burlap can hinder root penetration into the native soil and can cause long term problems for the tree. If the burlap is plastic, remove it entirely, disturbing the root ball as little as possible. If the burlap is a natural fiber, either remove it, or fold it into the bottom of the hole, or cut it near the base of the root ball. Remove girdling roots if present, and continue as described for bare root trees.

After planting, prune out only damaged branches and suckers at the base of the tree (these should be removed whenever noticed). Leave all remaining growth to maximize the tree’s production of sugars in the first critical year of growth. The tree can be pruned for shape in the spring the next season (see Bulletin #2169, Pruning Woody Landscape Plants).

Several diseases can cause significant aesthetic damage to crabapples. If severe enough, they can cause permanent damage. You can prevent these diseases by choosing plants wisely. Many crabapples are resistant to some or all of these problems. The crabapples listed in this publication are rated for their resistance to these problems. By choosing resistant crabapples, you can avoid the need for chemical controls in the future.

Apple Scab is the most serious disease threat to apples and crabapples in Maine. The apple scab fungus overwinters in old infected leaves and on previous-year twigs of affected crabapples. The first infection of the season occurs in early June. Secondary infections can occur during periods of wet weather throughout the season.

The fungus causes dull, smoky, irregular spots on leaves. The spots turn olive-colored, and leaves may turn yellow and fall as early as midsummer. The fruits on affected trees develop circular, rough spots, which turn from olive to brown to black.

Fireblight is a bacterium that overwinters in infection sites on apple, crabapple, hawthorn, amelanchier, mountain ash, and pear. Splashing rain spreads infections to flowers in spring, and nectar-seeking insects can move the bacteria from tree to tree.

Fireblight advances quickly and often kills trees in drier climates, but it can often be controlled in Maine through the selection of resistant plants, and early pruning of affected shoots.

Cedar-Apple Rust is a rusts fungus. Rust are fungi that require two host plants to complete their life cycle. Because the alternate host for this fungus (“Eastern Red Cedar,” Juniperus virginiana) is native to Southern Maine, cedar-apple rust can be an occasional problem.

On crabapples, cedar-apple rust causes orange spots, 1/8 to 3/4 inch in diameter, on leaves. The upper surface is covered with tiny black dots in a reddish circle, and the lower surface later becomes covered with circular clusters of 1/6-inch cup-shaped structures with fringed edges. In fall, spores from these cups are windblown to Eastern Red Cedar. Eighteen to 20 months later a different kind of spore is produced, which can reinfect crabapples.

Heavy infection of cedar-apple rust can cause early leaf drop and plant stress in crabapples. This problem can best be controlled by choosing resistant cultivars.

Powdery Mildew is a fungus that can attack the flowers, leaves, and fruits of crabapples. Generally, it causes narrow, cupped young leaves with a powdery white fungal growth on the leaf surfaces. The fungus overwinters in dormant buds and causes new infections in warm humid spring weather. Although unsightly, it generally causes little damage, and it can be avoided through careful plant selection.

Insects and Other Pests

Aphids are small, soft-bodied insects, generally pale green. They feed by piercing and sucking juices from the undersides of young leaves, causing them to curl downward to twist. Aphids also secrete a sticky honeydew, which falls on leaves below and supports the growth of black sooty mold fungus.

Aphids can be controlled by knocking them off branch tips with a forceful stream of water. Heavy infestations can be pruned out. For chemical control recommendations, contact your local UMaine Extension County Office.

Mites are a serious problem in Maine only in hot, dry summers. They are very small, spider-like organisms that feed on the undersides of leaves, causing a yellow-to-bronze discoloration.

Eastern Tent Caterpillars feed in early summer by chewing on young leaves. At night, they retreat to their webbed nests in the branches of trees. Physical destruction of the nests and insects is the best control. Do not burn the nests, as this can cause significant damage to the trees.

Flathead Apple Tree Borers tunnel under crabapple bark at or near the soil line. They can girdle (eat completely around the tree just inside the bark) and kill the tree if left undetected. A clue to their presence is a pile of sawdust at the base of the tree.

Borer attack can generally be avoided by promoting healthy tree growth and by preventing bark damage from lawnmowers. If borers are detected, probe into the holes with a wire to kill them (several may be present).

Rabbits and mice chew on the bark of young crabapples during the winter. If they remove the bark all the way around the trunk, the tree will die. Mice generally feed on the trunk at ground level, but rabbits sometimes feed on limbs higher in the tree and may cut off young twigs.

Rabbits are difficult to deter, but they generally cause little damage to crabapples in Maine. Mice can cause serious damage to Maine crabapples. Eliminating sod around trees by applying mulch helps to discourage mice. Protecting trunks with hardware cloth in late fall prevents mice from reaching trees during winter. Tramping down the snow around trunks after each snowfall can help eliminate mouse tunnels. For information about baiting and trapping rabbits and mice, contact your local UMaine Extension County Office.