Powdery scab was first found in Germany in 1841 and spread throughout Europe by 1855. It was found in South America in 1891 and has been recognized across North America since 1911-1913. The pathogen is widespread and occurs in most potato-producing areas of the world.

The appearance of the disease is variable from year to year, being dependent upon a conducive environment. Until recently, the disease has been considered rare and unimportant. However, it has become a concern for potato producers in Maine.

Powdery scab is caused by the pathogen Spongospora subterranea f. sp. subterranea. This pathogen is a member of the family Plasmodiophoridae, which has been shifted from the Fungi to the Protozoa kingdom. The pathogen has a resistant resting stage that enables it to survive in the soil for many years. This pathogen is similar to the pathogen that causes club root of cabbage, broccoli, and other crucifers.

In the presence of roots of susceptible plants, the thick-walled, persistent resting spores germinate and produce primary swimming zoospores. These primary swimming zoospores can penetrate root hairs and stolon epidermal cells, as well as lenticels, eyes, and wounds of developing tubers. Under conditions favorable to the disease, galls may appear on the roots three weeks after infection. Pathogen growth and development continues in the primary infection site.

Eventually, secondary swimming zoospores can be released and then infect roots, stolons or tubers. Typically, these secondary zoospores infect developing tubers. These tuber infections develop into powdery scab lesions on tubers. Eventually, spore balls develop in these lesions. The spore balls on these tubers contain thick-walled persistent resting spores that can serve as the long-distance transmission of the pathogen, as can movement of infested soil.

The pathogen flourishes in soil temperatures less than 68 degrees F. It prefers poorly drained soil and can survive in the soil for longer than six years. The optimal infection conditions are soil temperatures of 55 to 65 degrees F with soil moisture over 15 percent. If these environmental and host conditions are met and the pathogen is present, the disease can occur. The pathogen can be infectious across a pH range from 4.7 to 7.6. High soil moisture early in the season with a gradual drying out is thought to encourage the development of the disease.

The pathogen can infect a limited number of other plant species, but with the exception of black nightshade (Solanum nigrum), it is not known to form spore balls on these other species.

Disease develops only when a host is present, conditions are favorable, and S. subterranea f. sp. subterranea is present. There is a window of host and environmental conditions that needs to be met for this disease to occur. The susceptible stage of potato tubers is one week before tuber set (with tuber set defined as where more than 50 percent of the stolons have tips swollen to at least 3/16 inch in diameter).

Symptoms of this disease are confined to belowground parts of the potato plant. Infected roots and stolons may have white gall-like growths, which turn brown as they mature. These galls are the enlargement and proliferation of infected cells. 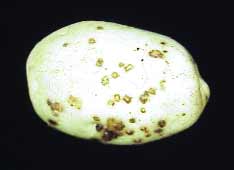 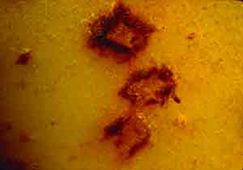 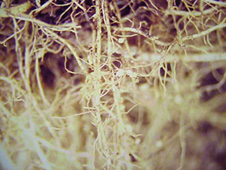 The pathogen invades the tuber through lenticels, wounds and sometimes eyes. The tuber symptoms loosely resemble those of common scab. However, the powdery scab lesions are usually smaller, circular, uniform in size and surrounded by a fringe of potato skin when mature. The tuber lesions progress from raised and blister-like brown or olive-brown spots, to dark-brown round, open, raised pustules. As the tuber skin over the pustules ruptures, a shallow depression filled with a brown, powdery mass of spores and broken-down tissue is exposed. These spores can cause the disease.

When stored, infected tubers are predisposed to other maladies such as Fusarium dry rot, bacterial soft rot, and other opportunistic invaders. This pathogen can transmit potato mop-top virus.

The effect of powdery scab on yield is not well documented. Tubers with symptoms may be rejected by the fresh, processing, or seed markets.

There is no good control for powdery scab. Control measures need to both reduce the inoculum level in the soil and the inoculum level on the seed. Spores can be spread by contaminated seed tubers or by contaminated soil. Mancozeb-containing seed treatments may help reduce the spread of the pathogen from infected seed. However, the soil can be infested without causing the disease, if the environmental conditions required for disease development are not met. Long crop rotation (3–10 years) can help reduce the soil populations but is rarely practical. Planting powdery scab-free seed will aid in control, as will avoiding manure from animals fed infected tubers (the resting spores will pass unharmed through the digestive tract).

Removing infected potatoes will not eliminate the pathogen. Spores can move from infected potatoes to non-infected potatoes in storage, as the spores are easily dislodged and become airborne. Spores on the surface of tubers can then be moved into the soil at planting. The distribution of infested soil or infected tubers will disseminate the fungus. Soil fumigation with metam sodium reduces but does not eliminate, spores. Composting does not completely eliminate the spores of the pathogen. Cultural practices that make conditions less favorable to infection — such as planting in well-drained soil — are recommended.