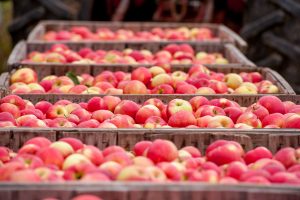 The goal of this factsheet is to help you determine if your farm, your produce, and/or your farming activities fall under the requirements of the Produce Safety Rule.

What is subject to the Produce Safety Rule?

The Produce Safety Rule (PSR) is one of the sections of the Food Safety Modernization Act. The PSR sets science-based standards for the safe growing, harvesting, packing, and holding of fruits and vegetables. This rule regulates fresh produce grown domestically, or internationally and imported into the United States and its territories. The PSR provides basic food safety oversight for certain types of fresh produce, to prevent foodborne illness. The ultimate goal is to protect public health by protecting our fresh produce supply from contamination. In general, the requirements of the Produce Safety Rule apply when three conditions are present: “covered produce,” “covered farms,” and “covered activities,” terms we will define for you below. The PSR applies to farms with more than $25,000 in average annual produce sales during the previous three years (adjusted for inflation). However, some produce is not “covered,” and your farm or your produce may be eligible for an exemption. First, we will define some terms; then we will go through different exemptions.

Part 1. What is Covered Produce?

Under the Produce Safety Rule, “produce” generally means any fresh fruit or vegetable, and includes mushrooms, sprouts, rhubarb, tree nuts, and herbs. When we talk about produce we are referring to the harvestable or harvested part of the crop, which may include parts that are not edible. For example, when talking about tree nuts, the entire unit (nut or kernel, hull, and shell) would be the “harvestable” or the harvested part.

The term Covered Produce is produce that falls within the conditions of the Produce Safety Rule and is a raw agricultural commodity (RAC) that FDA has determined is usually eaten raw.

The following produce is covered by the PSR (other produce may be added to this list by the FDA):

Part 2. What produce is not Covered Produce?

Crops “not covered” by the rule include produce that is:

“Covered” activities include growing, harvesting, packing or holding “covered” produce on a farm.

Harvesting means activities that are usually performed on farms to remove raw agricultural commodities from the place they were grown or raised.

Packing means the activities done after harvesting (other than just transporting it from the field) and before final packaging (see definition below). Examples are repacking, sorting, culling, grading, and weighing, but does not include chopping or peeling or cooking in any way.

Packaging (when used as a verb) means placing food into its final container that directly contacts the food and is the container that the consumer will buy.

Part 4. Is your farm a Covered Farm?

Let’s go through the flowchart that will determine if your farm is subject to the Produce Safety Rule (PSR) and/or if you qualify for an exemption.

Q1: Does your farm grow, harvest, pack, or hold produce?

If NO, then your farm is not covered by the PSR.

Q2: Does your farm on average (in the previous three years) have more than $25,000 (adjusted by inflation) in annual produce only sales?

If NO, your farm is NOT covered by the PSR. PLEASE NOTE: If your farm sells less than the adjusted $25,000 threshold mentioned above, you are not covered by the Rule and are not subject to any of its requirements. You do not need to save your sales records to prove it. However, you are not exempt from producing a safe product and could still face liability issues if you are ever involved in a foodborne outbreak.

The Produce Safety Rule applies to farms and certain farm mixed-type facilities that averaged more than $25,000 in annual produce sales during the previous three-year period. Farmers should note that the $25,000 threshold set when the FDA Food Safety Modernization Act was enacted in 2011 must keep up with the pace of inflation. This information is available using the federal calculation for inflation adjustments provided by the U.S Bureau of Economic Analysis or by FDA on its website for FSMA Inflation Adjusted Cutoffs.

All figures have been obtained from the FDA website. For an updated version, check FSMA Inflation Adjusted Cut Offs.

In your annual calculation of total produce sales to determine whether the three-year average threshold is met, including the following:

Do not include the following in the calculation:

Q3: Of all the crops you grow, are any of the produce crops on the list of the commodities that FDA has identified as Rarely Consumed Raw?

Rarely Consumed Raw (RCR) Produce includes produce that the FDA determined are almost always eaten after being cooked. Unlike the commercial processing exemption, which requires records, you do not need any documentation of the cooking process for the produce to be considered RCR because the FDA already did this leg-work.

This list of Rarely Consumed Raw produce was developed by survey results from consumers about their produce usage and eating habits. The produce on this list were the only ones determined to have statistical data supporting that they are unlikely to be consumed raw, and will likely be cooked before eating, providing a kill-step for pathogens. The FDA considers this list of Rarely Consumed Raw produce to be “exhaustive,” meaning if a crop is not on this list, it is considered to be covered produce by the Produce Safety Rule.

“Covered Produce” also does not include food grains — meaning the small, hard fruits or seeds or the crops bearing these fruit or seeds — that are primarily grown and processed for use as meal, flour, baked goods, cereals, or oils rather than for direct consumption. Examples of food grains include barley, dent-or flint corn, sorghum, oats, rye, wheat, amaranth, quinoa, buckwheat, and oilseeds (e.g., flaxseed, rapeseed, soybean, and sunflower seed).

Q4: Is your produce for personal/on-farm consumption or use?

If YES, this produce is NOT covered by this rule.

Produce that is produced by an individual for personal consumption, or for consumption on the farm on which it was produced or on another farm under the same management, is not subject to the Produce Safety Rule. Examples include:

If YES, This produce is eligible for exemption from the rule provided you make certain statements in documents accompanying the produce, obtain certain written assurances, and keep certain documentation, as per section 112.2(b)(2) through (b)(6).

If the farmer knows their produce will be commercially processed by their customers, they are not required to treat that produce according to the full requirements of the Produce Safety Rule. They will need to make a disclosure statement on the paperwork that travels with the produce:

“This produce has not been processed to adequately reduce the presence of microorganisms of public health significance.”

This requirement intends to prevent produce that has not been treated according to the basic minimum food safety standards laid out in the Rule from getting out into fresh markets where they may be consumed without adequate food safety controls.

The requirement for farmers to get written assurances from their commercial processing customers has been delayed for another two years in recognition of the paperwork burden this will impose throughout the value chain. See the compliances dates in part 6 for the current deadlines to obtain written assurances.

Q6: Does your farm, on average, (in the previous three years): Have less than $500k annual food sales, AND a majority of the food (by value) is sold directly to “qualified end users”?

If NO, your farm is covered by the PSR.

If YES, your farm is eligible for a qualified exemption from this rule.

Please note: This is the only time in the PSR that they ask for your annual food sales as a whole.

A produce farm is eligible for a qualified exemption if it meets the following three criteria:

All figures have been obtained from the FDA website. For an updated version, check FSMA Inflation Adjusted Cut Offs.

Qualified exemptions are based on a farm’s sales of all food products, including produce sales. Food encompasses all food or drinks used for humans or animals, including any food sold at restaurants, cafes, ice cream stands, etc., on your farm. Examples of food products include livestock, meat, dairy products, hay, grains, wine, and other food. Live animals are within the definition of food.

Qualified end-users are either:

A restaurant is a facility that prepares and sells food directly to consumers to eat Immediately. (See 21 CFR 1.227).

A retail food establishment’s primary function is to sell food directly to consumers. (See 21 CFR 1.227). Examples include roadside farm stands, meal kit services, grocery stores, convenience stores, schools, hospitals, and farmer’s markets that fit the definition. Sales over the internet are considered sales to a qualified end-user as well, even if the purchaser is not in the same state or within the 275 miles radius.

In the example illustrated below, a farm in Kittery, Maine, can sell to a customer from Fort Kent, Maine, because it is in-state (even if it is further away than 275 miles). The Kittery farm can also sell to anyone in Vermont, New Hampshire, Massachusetts, Connecticut, Rhode Island, and parts of Pennsylvania, New Jersey, and New York, including New York City, which is inside the 275 miles limit. In addition to U.S. sales, international sales that are inside the 275 miles, like sales to Quebec City and Montreal in Canada for this example, also qualify for the exemption if the other criteria are met. In the illustration, the farm in Kittery can sell to anyone in the green zone. 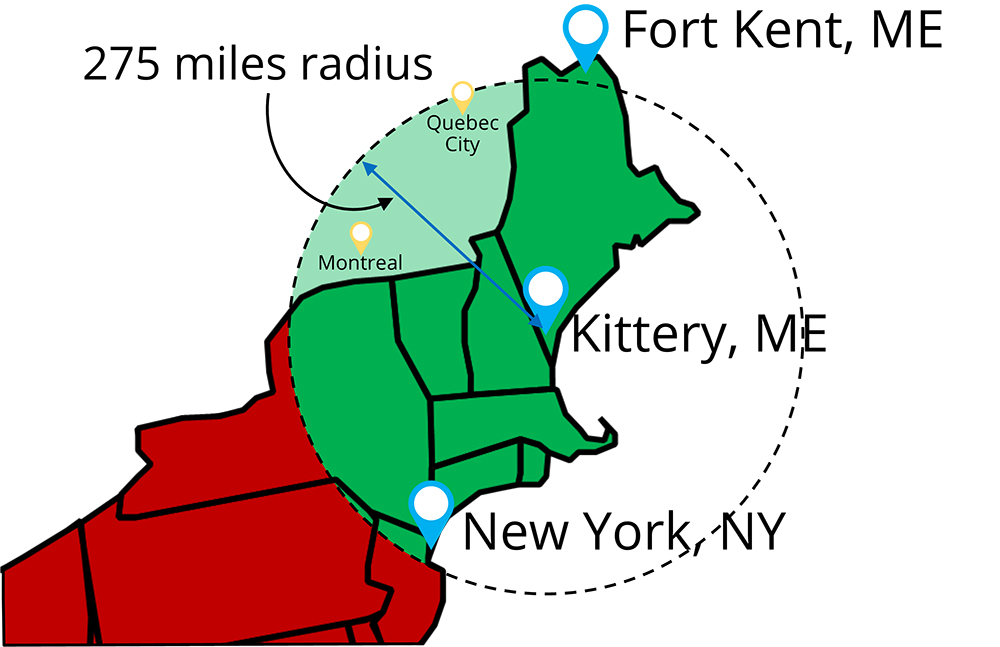 To determine the radius for your business, use the radius map tool (see “links” at the end of this fact-sheet in case you are reading in print). You use this tool by entering the address of your facility, the radius (275 miles), and clicking on “New Circle.” Add the radius area to the area of your state that is outside such radius, and you should have a map of your qualified end-users (assuming they are someone who is buying for their consumption, a restaurant, or a retail food establishment).

Now that you know the area for your qualified end-users, use the sales calculations to check if you are a qualified exempt farm using our calculator tool. This tool was created to be as simple as possible. To use it, you will need to have the following information (the tool will calculate for inflation automatically):

B – Average annual FOOD sales to qualified end-users over the last three years.

After entering this data on the Microsoft Excel® spreadsheet tool, you will be answered about your eligibility to the qualified exemption. Download the calculator tool (Excel).

Part 5. What are the Modified Requirements for Qualified Exempt Farms?

Part 6. What are the Compliance Deadlines?