Bulletin #7036, How to Tap Maple Trees and Make Maple Syrup 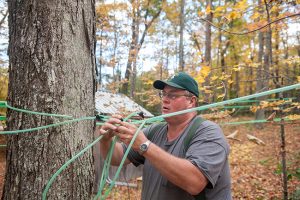 No one really knows who first discovered how to make syrup and sugar from the sap of a maple tree. However, we know that maple syrup was an important commodity in the North American Indian economy. Maple syrup and sugar were used for barter by Indians living along the Great Lakes and the St. Lawrence River.

In 1663, English chemist Robert Boyle told associates in Europe, “There is in some parts of New England a kind of tree whose juice that weeps out its incision, if it is permitted slowly to exhale away the superfluous moisture, doth congeal into a sweet and saccharin substance and the like was confirmed to me by the agent of the great and populace colony of Massachusetts.”

How Much Syrup Can I Get?

The yield of sap varies greatly with the method of tapping, the size of the tree, and seasonal differences. Sap yield is usually expressed in terms of the number of tapholes, rather than the number of trees. The average yield for a taphole is from five to 15 gallons. However, under favorable conditions, a single taphole can produce as much as 40 to 80 gallons of sap in a single year. It takes about 10 gallons of sap to produce one quart of syrup.

Sugar content can also vary depending on the time of day. It may be high in the morning and lower in the afternoon.

What Happens in the Tree?

Understanding how maple sap is formed requires some knowledge about tree physiology. In the later summer and fall, maple trees virtually stop growing and begin storing excess starches throughout the sapwood, especially in cells called ray cells. This excess starch remains in storage as long as the wood remains colder than about 40 degrees F. Whenever wood temperatures reach around 40 degrees F, enzymes in the ray cells change the starches to sugars, largely sucrose. This sugar then passes into the tree sap.

As the temperature increases to about 45 degrees F, the enzymes stop functioning and sugar is no longer produced. In March and April, the sugar changes back to starch—except during periods of flow.

Rising temperature creates pressure inside trees, causing sap to flow. When a hole is bored into a tree, wood fibers that are water- (sap-) carrying vessels are severed, so sap drips out of the tree.

How To Do It

Step 1. Drill the hole using a drill bit with a diameter of 7/16 inch, at a convenient height and two inches deep if you are using standard size spouts. If you are using small taps (5/16 inch), or the health spout (19/64 inch), use the corresponding drill bit size and drill the taphole only 1 1/2 inches deep. Look for unblemished bark. Do not bore closer than two feet directly over or under a former tap hole or closer than six inches from the side of an old taphole. Drill the taphole level and horizontal with no angle so the sap flows out readily. Use a sharp drill bit to minimize rough wood in the taphole, which can reduce sap yield and cause sap quality problems.

Step 2. Tap the spout in lightly so that it is tight and cannot be pulled out by hand. But don’t drive it in so hard that you split the tree. Tap on warm days when the temperature is above freezing to minimize the risk of splitting the tree.

Step 3. Hang your bucket or container on the hook of the spout if it is a purchased one; or, if you have made your own, fashion a length of wire to serve as a hanger. Be sure to cover the bucket to keep out rain, snow, and foreign material.

Step 4. To boil sap, use a hobby-sized evaporator, an outdoor gas range, or an outdoor fireplace. Prepare to boil the sap by making sure your selected fuel is ready in ample supply, and having a large pan or series of pans ready for the sap. (Do not plan to cook the syrup indoors on the stove, without a stove vent fan or a dehumidifier. Boiling sap creates a lot of steam.)

Step 5. Once the sap has started to run and you have collected enough to fill your pan for boiling, you are ready for the fire. Do not fill your pan to the top, as it will boil over. (A bit of butter or vegetable oil rubbed on the rim will often prevent boiling over.) As the sap boils down, keep adding more sap. Keep the sap at least 1 1/2 inches deep in the pan, or it may burn. You can pour cold sap right into boiling sap, or you can preheat it. It will take a lot of boiling to make syrup. Never leave boiling sap over a wood fire unattended. Sap can quickly boil away and burn the pan.

Step 6. Do not leave an accumulation of sap in the collection buckets, especially in warm weather. Sap is like milk: it will sour if left in the sun. Keep the sap in cold storage. Boil it as soon as you can.

Step 7. Sap becomes finished maple syrup when it reaches 66-67 percent sugar content and 7.1 degrees F above the temperature of boiling water. You can learn the boiling point of water, which varies depending on your elevation and the barometric pressure, by measuring the temperature of the raw sap when it begins a rolling boil. A syrup or candy thermometer is very useful. If you have a large operation, you might consider using a syrup hydrometer and testing cup to tell you when the syrup is done. Concentrations below 66 percent sugar content can sour over time. If the syrup is boiled above the 68.9 percent density of syrup, sugar crystals can form in the bottom of storage containers. Using a hydrometer is an accurate method of determining sugar concentration.

Step 8. When the syrup has reached the correct density and temperature, filter it to remove “sugar sand” before you hot-pack it in containers. Filter the syrup while it is still hot, through clean filter material such as wool or Orlon™, available from maple equipment dealers. If you don’t have filter material, you may put the syrup in a container and let it cool for 12 hours or more. The sediment will settle to the bottom and the clear syrup can be carefully poured off. This should be reheated to 185 degrees F (almost boiling) before it is poured into containers for final storage.

Step 9. Syrup should be canned hot (185 degrees F). Pour the hot syrup into sterilized canning jars and seal. Fill them full so that very little air will be in the jar.

Step 10. Store your syrup in a cool, dry place. After a container has been opened for use, it must be refrigerated. Should mold form on syrup that has been stored for several months, discard the syrup: there is the potential for contamination by a micro-organism that can cause food-borne illness.

Step 11. After the season is over, clean your equipment with plenty of hot water. Use a brush or cloth to scrub any buildup or scum and triple-rinse with hot water. Never use soaps or detergents on any equipment, as these will leave a residue that will contaminate the syrup with off flavors. Wash filters with hot water only, as residues cannot be rinsed out of most filters. Store the equipment in a dry area.

VIDEO: How Do I Tap a Maple Tree? (YouTube)

VIDEO: When Do I Tap a Maple Tree? (YouTube)

VIDEO: How Do I Test the Quality of My Homemade Maple Syrup? (YouTube)

Where To Go for Help

You may want to visit a commercial maple producer to pick up tips on how to make syrup. Many producers hold open houses during the spring and will welcome your questions.

Caduto, Michael I. and Joseph Bruchac. Keepers of the Earth. Golden, CO: Fulcrum, Inc., 1989. Has a chapter on Native Americans and maple trees.

Mann, Rink. Backyard Sugarin’. Woodstock, VT: The Countryman Press, 1976. An excellent “how to” book for the hobby and small-scale producer.