Rufus and Alice Percy own and manage Treble Ridge Farm in Whitefield, ME, 15 miles southeast of Augusta. Their seven-year- 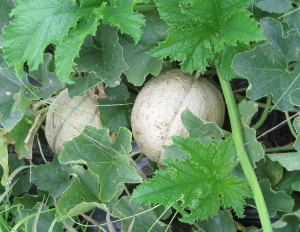 Like many of Maine’s small direct-marketing farmers, a key factor to the Percy’s success is the increasing demand of the locavore consumer.  The importance of niche markets cannot be underestimated for small family operations like Treble Ridge Farm.

As producers for the Maine niche market, the Percy’s identify and produce crops that will satisfy the enthusiastic, unexpected and sometimes quirky demands of their local markets.  According to Alice,

“In this area there is a much closer balance between supply and demand than there are in other places.  There’s a lot of up and coming young farmers, a lot of organic farmers and a good many of them are doing produce. But there are still a lot of gaps in the supply and one major gap that we have identified is fruit.”

The Percy’s interest of growing organic melons for market led them to their first Farmer/Rancher SARE Grant: Evaluating suitability of open-pollinated melon varieties for intensive organic production.  The two-year project was launched in 2010.  The main objectives of the project were to develop a greater knowledge base for Maine farmer’s on the production of organic melons and to develop melons as a staple fruit crop in the Maine local foods market.

Melons are not one of Maine’s most common fruit crops, largely because they are difficult to grow in Maine.  In 2009, only 5 certified organic farms in Maine planned to grow at least 1000 row feet of melons (MOFGA).  A thoroughly evaluated index of climate appropriate varieties and cultural practices for growing melons in Maine was not readily available.

Alice chose a selection of hybrid and open-pollinated varieties, however, she was especially interested in discovering open-pollinated varieties that could be grown out for seed.  Such open-pollinated crops often appeal to the locavore’s taste and preference for flavorful heirloom varieties. As Alice put it, “A fairly well-informed farmer’s market consumer knows Brandywine Tomato, it’s almost like a brand name and it would be really cool if Honeyrock melon became the same thing.”

Alice discussed her interest in the cultivation of open-pollinated melon varieties:

“I’m certainly not an open-pollinated die-hard, there’s nothing better than a hybrid broccoli or sweet corn. But when it comes to cucurbits, I like the open pollinated ones a lot and there’s so much variety and richness and new depth of flavors to be found that I thought it worth exploring, and it really has been.”

Alice used the following parameters to monitor and evaluate twenty-two varieties of melons chosen for fast maturation (<84 days) and/or history of being grown in the northeast.

The melons were started in an unheated greenhouse on May 1st in organic potting soil with ten percent worm casting. On May 21st the melons were transplanted into fine sandy loam soil under black plastic. The soil had been amended in previous years with chicken manure and cover crops to increase organic matter in the well-drained sandy loam. Before the melons were planted, manure-based compost from Living Acres was incorporated at 150 pounds per acre. The melon seedlings were watered in with fish-kelp emulsion.  Row-cover was kept on the crops until flowering.

“The trials last year (2010) showed that the hybrids were down around the middle-bottom for flavor and maybe in the middle for yield and there were open-pollinated varieties that blew them out of the water,” reported Alice.

Overall, 2010 was an excellent year for growing fruits and melons in particular.  The heat, sunshine and enough rain (but not too much), made for fantastic yields.  From the 500 row feet of melons planted, Treble Ridge Farm harvested 1500 pounds of marketable melons.  As 2010 was an unusually good growing season, it will be necessary to compare results from 2011 to determine how some of the favored varieties perform under more typical Maine growing season conditions.

Table 1 below outlines results from the 2010 melon trial taken from their SARE Project Final Report. Storage capacity was not monitored because an equipment failure with the cooler resulted in melon loss to freezing.

As for 2011 results, the cooler season not surprisingly caused a decrease in melon yields.  According to Alice “Yields were way down this year, Honey Rock disappointed but Iroquois held strong as did Early Silver Line.”  Statistical analysis of the data is currently being processed.  Results will be available later this year. This year’s results will help to further determine suitable melon varieties for cultivation in Maine as 2011 was a more typical growing season for the region than 2010.

“We had 19 varieties at once last year to sample. They all look pretty similar, like a melon. But the flavor and the texture was so different, some were watery, fleshy other super sweet. It really surprised me.” — Rufus Percy

Treble Ridge Farm plans to continue growing melons to further diversify their product offerings; fill the supply gap of fruit in the Maine local food market; and grow an annual fruit crop to fit in their 4-year rotation of pastured pigs, cover crops, annual fruits and vegetables and pastured pigs again. The Percy’s hope that their SARE project will serve as “a piece of mobile information that can be used for farmers statewide and regionally.”   In an era when locavore consumers are growing in number, production of unique, tasty melons that grow well in northern climates may prove to be a lucrative venture.

For more information about the Percy’s project, see their SARE Project Final Report.

More information about the Northeast SARE Farmer Grant program can be found on the NE-SARE website.