A large number of diseases occur in the northeast because of the frequent rainfall that favors their spread and development. The most effective method of prevention is to plant varieties that have resistance. Where that is not possible, keeping a clean orchard by removing diseased plant parts can slow the spread. In many cases, the trees will tolerate mild cases of disease with no harm.

Apple scab is recognized by the brown or olive green spots on leaves and the black spots on fruit. In severe cases, scab causes defoliation which weakens the tree and inhibits flower formation. McIntosh, Cortland and Macoun are very susceptible to scab.
Apple scab is spread from spores released from previously infected apple leaves that remain on the ground through winter and from unsprayed trees nearby. One way to lessen the number of infecting scab spores is to rake up leaves and remove them from the orchard before May. Another way to lessen this disease is to remove wild or abandoned apples trees within 100 yards. Unsprayed apples trees with scab infections provide spores that spread the disease.

Scab prevention is possible with spray applications of captan, sulfur or other fungicides. Captan and sulfur are “protectant” fungicides, meaning they should be applied before scab infection occurs. Captan is a component of Tree Fruit Spray. Timing is important for good results. When spraying either of these fungicides, protect skin and eyes from contact. Infections occur as early as the green tip stage of flower bud growth, which occurs in early May when green tissue emerges from the bud, and continue to occur all season with each rainfall. The six-week period from green tip until a week after blossom petals fall is the most important time to maintain protection against apple scab on susceptible varieties. Scab protection requires approximately weekly fungicide applications during this period unless there is an extended period without rain. Periods of frequent rains and prolonged leaf wetness during bloom cause the most severe scab infection conditions. If infections are not controlled, leaf spots will appear about two weeks later. These initial infections produce additional generations of spores that can continue to spread the disease. If early season infections are effectively suppressed, then monthly application of an effective fungicide in June, July and August is usually adequate to prevent other summer fungal diseases.

Flyspeck and sooty blotch are two summer diseases of apple that grow on the surface of the fruit, causing blemishes but not affecting the apple itself. Flyspeck appears as a group of tiny and sharply defined black dots. These groups are often circular and about half the diameter of a dime, but the specks can also be randomly distributed. Sooty blotch is another surface fungus that causes green, gray, or black stains that cover a large portion of the fruit surface. Flyspeck and sooty blotch are slow growing fungi. Visible symptoms take a month or more to appear after initial infection. Sooty blotch and flyspeck are both favored by high humidity, such as occurs in unpruned, large trees with thick canopies, or trees located in a pocket where morning dew persists into the day. Warm, humid weather in August or September leads to higher risk of noticeable flyspeck and sooty blotch.

Sooty blotch and flyspeck are easier to prevent than scab. A fungicide application in mid to late July, with a follow-up application in August usually provides adequate control. Captan and sulfur are effective fungicide options. However, they are primarily superficial, so most choose to tolerate them rather than applying a spray.

Symptoms occur on the foliage as yellow or orange spots approximately ¼” in diameter. Color is more brilliant on the upper side of the leaf. The underside of cedar apple rust lesions often have a ring of raised tissue which is spore-producing bodies of the fungus.

The disease spreads to apple and crab apple from late April to mid-June. Sulfur and captan are not very effective fungicides for preventing this disease. If needed, other fungicides containing fenarimol or myclobutanil are effective options. Where disease is expected to be severe, plant resistant varieties such as Black Oxford, Enterprise, and William’s Pride.

Black knot of plum and cherry is a fungal disease that produces black, elongated swellings on the limbs. Infections occur on new shoots beginning in spring at leaf out and continuing until shoots stop growing. As with most diseases, the fungus requires rain to infect shoots. Several months after initial infection, green swellings will appear, usually in late summer or the following spring. As they age, the knots turn black and harden.

Remove all knots from the orchard as soon as they appear. Prune them out by cutting two to three inches below the swelling. In some cases, entire limbs may need to be removed. Infected limbs bear few fruit and continue to spread the disease to healthy shoots. Removing wild plum or cherry trees from the surrounding area will help prevent this disease. Fungicides alone will not effectively control this disease, so removing infected tissues and wild fruit trees is essential for good control.

Brown rot is the major disease of stone fruits. No variety has complete resistance to brown rot, although plums are generally less susceptible than peaches, cherries, and apricots. Rainy weather during bloom leads to infection of flowers and young shoots, but severe blossom infection is uncommon. Infected flowers and shoots wilt, turn brown and die, but remain in the tree to spread the disease to fruit. As fruit ripen, they become susceptible to infection. Infected fruit have soft, rotten areas covered with fuzzy spores.

Removing infections as they occur reduces the spread of this disease. Infected fruit shrivel into “mummies”, but remain in the tree to spread the disease the following spring. Mummies can be easily removed when pruning in winter or early spring.

To protect flowers, the fungicides captan, propaconazole or sulfur can be applied just before or after bloom. Do not apply a ready-to-use tree fruit spray product to fruit trees in bloom because it contains insecticide which is harmful to bees. A second risk period for brown rot infection is during the final three weeks before harvest. Apply fungicide prior to ripening if wet weather occurs. 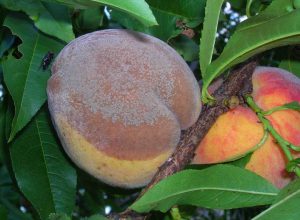 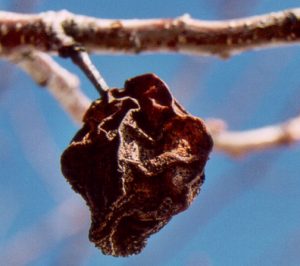 Cherry and plum leaf spot occur on both tart and sweet cherry as well as on plums. In late spring and into summer, small spots appear on the leaves. This is soon followed by yellowing and leaf drop. It spreads from infected leaves that overwinter on the ground. Removing these leaves before trees leaf out in spring will reduce the severity of the disease. A fungicide applied before and after bloom can also control this disease. Another disease, bacterial spot, also causes spotting on leaves and early defoliation, but the spots are larger in size. Bacterial spot cannot be controlled with fungicides.

Bacterial leaf spot of plum, cherry and peach causes small spots and holes in the leaves during summer months. Varieties vary in their susceptibility, but trees tolerate this disease and continue to grow healthy fruit. Because it is caused by a bacteria, chemical control with sprays is not possible.

Peach leaf curl causes leaves to become thickened and puckered. In some cases, the leaves develop an orange or red color. Infection occurs just as buds begin to swell in spring, but symptoms do not appear until a month after bloom. Wet weather favors infection. The varieties Avalon Pride, Betty, Elberta, Frost, Harken and Redhaven have some resistance.

A single fungicide spray before bud burst in spring will give nearly complete control. Effective fungicides include copper sulfate, Bordeaux mixture and chlorothalanil. When a high degree of control is desired, apply one of these before buds swell. Once infection occurs, this disease cannot be controlled.

Diseases of All Fruit Trees

Cankers on peach and other fruit trees are common and occur after winter injury. Branches with cankers can be removed with pruning, but when cankers occur on the trunk, removal becomes difficult without damaging the tree. Gumming or sap oozing on peach or plum branches is a sign of winter injury or disease, but in many cases, the tree eventually recovers from the injury, so tree removal should not be the first option unless the tree is obviously dead. The trunk area under large limbs are less hardy than the rest of the tree and a common site for cankers. Cankers enlarge gradually from year-to-year until the limb or trunk is girdled. Since most of these cankers occur on trees that suffer from winter injury, they may be unavoidable in cold climates.

Phytophthora root and crown root can be lethal to fruit trees. Planting in well-drained soil is the best way to prevent this disease from occurring. When soil is saturated for 24 hours or longer, infection is more likely to occur. Symptoms may not appear right away, but generally become evident during hot, dry weather when trees display wilting, stunted shoots and early yellowing of foliage. At the soil line, tissue under the bark will have red or brown areas, a spongy texture, and possibly, a distinctive musty smell. There are no resistant varieties.