The Bean Leaf Beetle, Cerotoma trifurcata (Forster), is a member of the Chrysomelidae (Leaf Beetles) family of beetles. It is found in much of the United States (including the eastern and western regions) and the beetles feed on vegetables–cucumbers, cucurbits, pumpkins, squash, and legumes–mostly when they are in the cotyledon stage.  It can sometimes be an economically significant pest of beans and soybeans.  The adult beetles chew small round holes in the young leaves.  Yield loss in beans and soybeans is caused mostly by leaf or cotyledon defoliation as opposed to pod-feeding.

There are variants or ‘morphs’ of the species that differ in color (red or red-brown, greenish, or yellow) and spot patterning, but the head is always black.  Northern climates generally see only a single generation of the bean leaf beetle per year, but in the Upper Midwest there can be one to two generations, and in the southeastern US there can be as many as three generations per year. 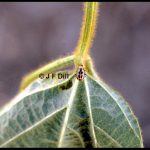 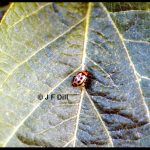 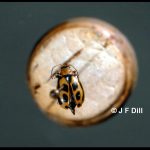 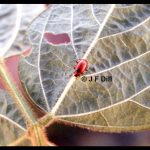 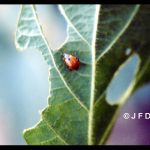 The larvae of these beetles are found in the soil where they feed on the roots (and nodules, in the case of beans).  Cornell reports that generally the feeding damage caused by the larvae is minimal, except in high population years when the damage may be significant enough to cause noticeable reductions in yield.