The Black Vine Weevil, Otiorhynchus sulcatus (Fabricius), is a type of beetle, (native to Europe but also common in North America) belonging to a group that is collectively referred to as root weevils, because their small and legless grubs feed on the roots of their host plants (the bark from stems near the ground are sometimes eaten as well). Adults of the Black Vine Weevil hide during the day, and feed at night on the outer edges of leaves, causing a characteristic rounded notch, and the species has a very large host range (100+ kinds of plants), including some trees, fireweed, labrador tea, sheep sorrel, running brambles (Rubus sp.), rhododendrons, strawberries, blueberries, cranberries, and many kinds of woody garden plants and flowers. The adult weevil is dull black in color and is unable to fly (its wing covers are fused together). There is only one generation per year.

Other similar broad-nosed weevils in the Otiorhynchus genus include the Raspberry Weevil (Otiorhynchus singularis) and one without a common name: Otiorhynchus raucus.  Besides raspberry, the Raspberry Weevil–which is also known as the Clay-colored Weevil–is a major pest of other small fruits as well as numerous ornamental plants (including rhododendron) and conifer seedlings. There is only one generation per year.  The adults start to emerge in the spring (March/April), feed primarily at night, and are most active in the spring and fall. 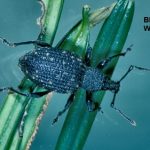 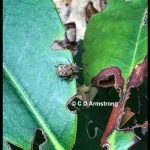 Raspberry Weevil (also known as the Clay-colored Weevil) (Otiorhynchus singularis) (very similar to the Black Vine Weevil) (this one was found feeding on a rhododendron in central Maine; 5/16/2021) 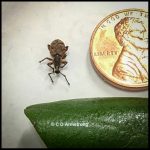