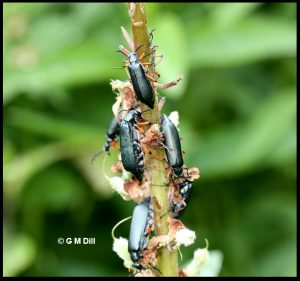 Blister beetles belong to a family of beetles called Meloidae.  Many of them–such as Oil Beetles (see below)–are showy and some have warning coloration that signals to potential predators to stay away, because they contain a chemical in their hemolymph called cantharidin, which is an odorless blistering agent that will cause temporary blisters when it comes into contact with human skin; hence, the name for these beetles. The beetles release the substance (i.e. the cantharidin) when they are molested or squished, as a defense mechanism, but careful, light handling of them rarely leads to blistering unless the cantharidin comes into contact with more sensitive areas on the body, where the skin is thinner, such as the areas between one’s fingers. The beetles are attracted to lights at night, so that is one common way by which they are encountered by people, leading to blisters on the neck and arms as the beetles are swatted or squished from the annoyance of their presence.  Cantharidin collected from species of two genera, Mylabris and Lytta, is actually used medically to remove warts.

Blister beetle adults tend to come together in groups (i.e. they are gregarious). They can be found feeding on flowers and leaves of plants of diverse families like Amaranthaceae, Asteraceae, Fabaceae, and Solanaceae, causing extensive defoliation sometimes to the particular plants upon which they happen to be congregated.  Virtually all of our major and minor food and forage crops also serve as suitable food hosts.

The blister beetle genus Epicauta is highly toxic to horses (one example is the Black Blister Beetle; see photo at left). A few beetles consumed in a single feeding of alfalfa can be fatal to a horse.

Blister beetle larvae are parsitoids, and although the larvae of some species prey upon grasshopper eggs, the larvae of most species target and consume the egg or larvae–and/or accompanying provisions–of solitary ground-nesting bees (bees in the families Megachilidae and Andrenidae, especially). A great example of this behavior can be seen with blister beetles in the genus Meloe–referred to collectively as Oil Beetles due to the defensive yellowish and oily appearance of their hemolymph (cantharidin) that they can release (as discussed above). The larvae–called triungulins–of some species of oil beetles will climb up to the top of a plant or flower and then clump themselves together into a mass that is similar enough in size and shape to that of a female solitary ground-nesting bee, that the male bee will land on the clump believing it to be a genuine female bee with which to mate. Moreover, the beetle larvae exude a chemical that mimics the sex pheromone of the female bee to help perfect their elaborate ruse. Upon contact with the male bee, many of the larvae are able to climb onto the bee before it flies away.  When the male bee happens to find a ‘real’ female bee with which to mate, some of the larvae will then attach themselves to the unsuspecting female bee, who then conveniently builds a nest (if she hasn’t already), after which the beetle larvae relocate once more from the female bee, to her nest.  Once the larvae are free and inside the nest, they can subsequently feast upon the bee’s egg or larva and/or the honey and pollen she gathers for the development of her offspring. The beetle larvae grow, thanks to the bee’s provisions, and eventually pupate in the bee’s burrow, only emerging again upon reaching adulthood.