Blow flies and Flesh flies are frequently discussed in tandem, because both of these kinds of flies are attracted to carrion, dung, or anything that is rotting or decaying.  You are apt to see them around compost bins and manure piles, for example. Flesh flies derive their name, however, from the fact that a few species lay their eggs in the open wounds of mammals.  Blow flies are apparently named from an old English expression used to describe meat that had fly eggs laid on it, which was said to be ‘fly-blown’ (the earliest records of its use can be found in some of William Shakespeare’s plays). 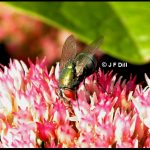 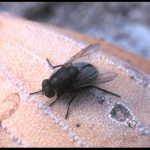 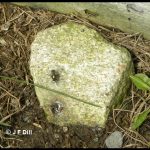 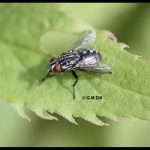 Blow flies are in a family of flies called Calliphoridae whereas Flesh flies belong to a family called Sarcophagidae, which comes from the Greek σάρκο for sarco- (= flesh), and φάγε for phage (= eating), i.e. flesh-eating.  Blow fly (synonym: blowfly) adults tend to have metallic coloration on their thorax (middle section) and abdomen, too (often bright blue-green), whereas flesh flies do not; flesh flies, instead, have black and gray longitudinal stripes on their thorax, and what is described as checkering on the abdomen.  Also, blow flies have a fatter and more rounded appearance overall.  Flesh flies are more streamlined in their overall body shape, with a much more tapered abdomen.