The Browntail Moth (Euproctis chrysorrhoea) was accidentally brought to Massachusetts from its native Europe in 1897, and soon after spread to the rest of New England and also moved into New Brunswick and Nova Scotia. The caterpillars have a huge host range of plants that they feed upon. However, they especially love oak, apple, crabapple, pear, birch and cherry trees. In addition to other hardwoods, they’ll also devour rose bushes that they encounter in the landscape after being dislodged from their primary host trees due to wind or other disturbances. UMaine researchers also recently discovered that at least the later-instar caterpillars can also survive on conifers.

A major problem with this insect stems from the fact that the caterpillars and cocoons are armed with defensive, barbed hairs which break off and–for many people exposed to them—cause skin rashes, headaches, and sometimes breathing difficulties. The reactions on the skin can mimic insect bites in appearance and sensation, causing people to sometimes mistake them as signs of mite, flea, or bed bug infestations.

The moths are attracted to light, fly at night, and are active in July and August.  They have a wingspread of about 1.5 inches (36-42 mm).  The wings and midsection are solid white on both the male and the female.  The abdomen has brown on it, and the brown coloration extends along most of the upper surface of the abdomen in the male [male example], whereas in the female, the top (upper/dorsal surface) of the abdomen is white, but the tuft of brown hairs at the very end is considerably thicker/wider compared to the male [female example].  Fortunately, the hairs on the adult moths are not toxic so those hairs do not cause a skin rash. 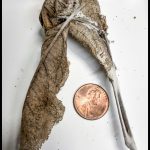 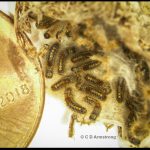 A peek inside a winter nest of Browntail caterpillars with roughly 30 healthy individuals (Orono, ME; 3/14/2022) 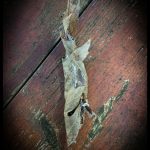 An oak leaf produced in 2021 found on the ground on April 24th, 2022 with signs of a likely cluster of browntail caterpillars inside of it (leaf contents revealed in two adjacent photos) (Etna, Maine) 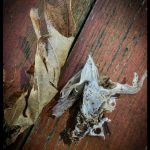 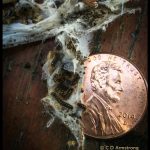 A cluster of young browntail caterpillars exposed from their protective nest of webbing that was removed from an oak leaf produced in 2021 that had fallen to the ground (April 24th, 2022; Etna, Maine) 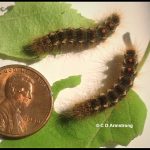 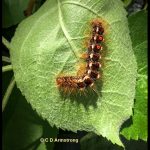 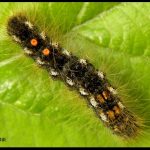 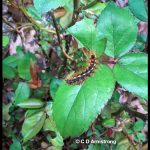 Browntail caterpillar (Euproctis chrysorrhoea) feeding on a rosebush (Etna, ME; 5/25/2022) 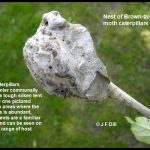 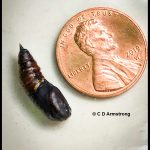 Pupa of a Browntail Moth extracted from its hairy cocoon (southern Penobscot County; 6/15/2021) 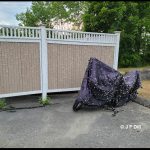 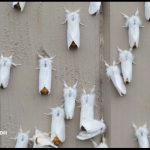 Closer view of some Browntail Moths from the adjacent photo (Kennebec County, Maine, 7/1/2021) 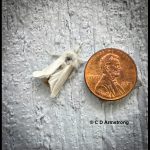 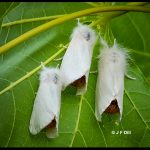 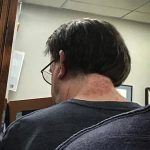 A bad-case example of the skin rash that the hairs from the browntail caterpillars can cause. Staff Photo, taken 5/26/21. 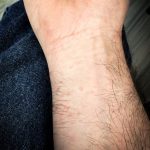 Example of the early stage of a milder case of a reaction to the Browntail caterpillar hairs on a person’s wrist. Staff Photo (5/26/2021).